Skip to content
Home/It’s a Journey: Our Experience on Clinical Trials

It’s a Journey: Our Experience on Clinical Trials 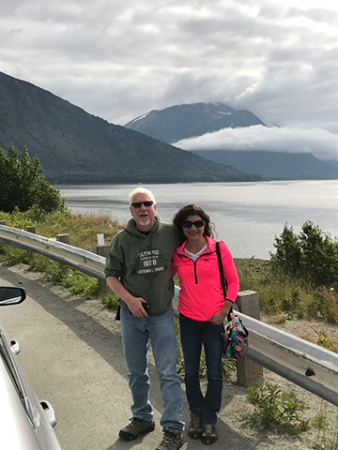 I was waiting in line to pick up a new prescription for Gleevec when my husband ran in and told me to forget it. After two surgeries, a year on 400 mg of Gleevec and a miserable few weeks on Sutent, Owen had a few rogue tumors that continued to grow. We were hoping that ramping up the Gleevec to 800 mg would do the trick, but his new oncologist had just called him in the car with the results of his mutation test, which identified his GIST type as PDGFRA D824V.

We left the Gleevec at the pharmacy and followed up with Dr. Brockstein a few days later. He told us that Owen wasn’t in immediate danger, but that without treatment, would likely only live another year or two. Since D824V is completely resistant to Gleevec and Sutent, a clinical trial would be the best next step.

This strategy didn’t seem too hopeful to us at the time. We both held the opinion that experimental cancer drugs were often dangerous and ineffective — an unlikely last-ditch effort for people who don’t have any other hope. That’s one of many reasons why we’re so fortunate to have the Life Raft Group. We found Dr. Bruce Brockstein — a GIST specialist — on the LRG database (https://liferaftgroup.org/gist-specialists), who helped dispel our fears that a trial would be a shot in the dark, and the research and support that the LRG provides is instrumental in helping us (or rather, helping me help Owen) remain aware of and understand his options.

Now it’s more than six years and two trials later — with a few surgeries between to reset the clock and let science catch up — and my beloved is still with me (well actually, he just left to go watch football with a friend).

Before we chose Dr. Brockstein, we had consulted with a different GIST specialist. She told us that she didn’t know of any studies currently recruiting patients with Owen’s mutation, but to look for future trials on National Cancer Institute’s website. Luckily, the LRG makes that process far less overwhelming.

The LRG clinical trials database (https://gisttrials.org/index.html) tracks those that are specifically for GIST and lets you search by treatment stage and status, trial phase and location. Clinical Trial Coordinator Jim Hughes and Data Analyst Jerry Call are fountains of knowledge who can help you further narrow your results. Between the LRG and your oncologist, you will not have to find a trial on your own.

For Owen’s first trial, Crenolanib, Jim Hughes, LRG’s Clinical Trials Coordinator, put me in direct contact with its principal investigator, Dr. Michael Heinrich, at Oregon Health & Science University (OHSU). His research assistant, Tracy Walker, spent about an hour on the phone with me to explain the study’s principles and procedures in layman’s terms and to determine whether Owen would qualify.

I guess the choice was easier for us than most because it was the only trial at the time that targeted his D824V mutation. But the logistics can be a bear — especially for frightened, stressed-out patients and caregivers — so here’s my advice for those of you who are considering the journey.

Participating in a trial literally is a physical journey if you don’t live near a site where it’s held. We live in the Chicago area, so both of Owen’s trials involved a temporary relocation to Portland, Oregon. He had to be there once a week the first month for a checkup and labs and every two weeks for the second month. After that, it was monthly trips with a scan every other month.

We don’t have kids and I am able to work remotely, so it was easier for us to stay in Portland for those first two months. OHSU put us up in a Residence Inn for the Crenolanib trial. For his BLU-285 trial, which he started in August 2016, we drove out and rented an apartment through Airbnb. We love the city and considered that stay to be the experience of a lifetime — ironically, one we wouldn’t have gotten if Owen didn’t have GIST. I know that different circumstances won’t allow the same opportunity for everyone and that we’ve been very blessed.

In a certain sense, that honeymoon is over. For the next eight months, Owen flew out monthly and I only went if he had a CT scan. Now I go with him every month because the side effects of the drug make the trip exhausting for him. He might argue with me on this, but it’s better that I’m there to make sure we cover everything we need to during his appointments. Travel could become harder if his health deteriorates, but easier if trial protocol extends the time between visits.

Of course, there are costs associated with a clinical trial. Our initial terror for Owen’s first was the medical bills. Back then, he had an individual insurance plan (not provided by an employer) and we assumed the trial would be considered out-of-network. Tracy Walker explained that patient care costs related to treatment outside of the study — such regular checkups and scans you’d have anyway — would be covered by our insurance. Costs directly related to the study — such as the drug itself and testing for research purposes — are typically covered by the trial sponsor/drug manufacturer.

I called Owen’s insurance company to confirm this for ourselves, and everything from there on was handled by the OHSU clinic. I would insist on this and be suspicious of a trial that doesn’t provide this help. We haven’t had any problems, even for his current trial, now that he’s covered by Medicare and a supplement.

Travel and lodging differ by trial and location, so I can only speak from our own experience. Flights for patient and caregiver are reimbursed in full, as well as parking at the airport and transportation to the clinic. We’re expected to find a reasonable airfare (not first- or business-class) but direct flights are okay. Our hotel costs were completely covered for Owen’s first trial without us ever putting any money down. Lodging for his current trial is covered to a limit. The state of Oregon provides a stipend of about $60 for meals on the day of the appointment. That sounds like a lot, but meals can be expensive in a city, especially when you’re too tired for anything but room service.

Reimbursement doesn’t happen until after the visit, which can be a problem if you can’t pay off your credit card in the interim. We got a credit card from the airline we use and put all expenses on that to make accounting easier and earn more miles. Save all receipts and keep copies of what you submit. No offense to the medical team, but it’s far easier to meet and work directly with the clinic’s financial department. For instance, Owen ran the numbers to show that driving out and renting would be cheaper than weekly flights and hotels, and the finance team agreed to reimburse us for the equivalent amount.

It would be so much easier if all of Owen’s care could be handled at OHSU. Side effects are going to happen no matter what, and they’re probably going to be increasingly difficult. My best advice — which we didn’t learn until after trial one — is to maintain your relationship with your primary care doctor and oncologist at home. Owen is getting the most advanced treatment for his cancer and we love the OHSU team, but it’s impossible to handle everything from a distance.

We tend to blame every health issue as a result of the drug — and frankly, it usually is — although it’s not a matter of blame, but of what can be done about it. For instance, since OHSU began coordinating blood tests with his oncologist at home, we no longer have to hightail it to the ER when he needs a transfusion for his anemia. His terrific primary care doctor also does what he can to help us cope with the rest.

It isn’t easy, but clinical trials have given Owen and I not only hope, but several additional wonderful years together. It’s an up and down experience, as I know my ramblings attest. When the LRG asked me to write this article a few weeks ago, I wasn’t sure if I could do it because I didn’t think I’d have anything positive to say. I now realize that is not true, we were only having a bad week. Although we’ve been optimistic and despondent several times since this battle began, I just asked Owen again,  and he’s confident that it’s still worth it. I am too.