An Exciting Time for GIST Research 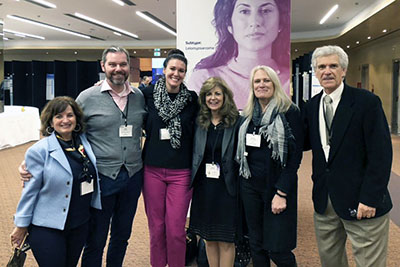 Anette Duensing, a member of the LRG Research Team from the University of Pittsburgh, reported on results from her survey which attempted to assess cognitive issues among GIST patients. The survey contained 134 questions and was conducted online. It included assessments from a number of standard questionnaires designed to assess cognitive function and its impact on quality of life (particularly in the areas of anxiety, depression, fatigue, sleep disturbance, and pain interference) combined with questions on demographic information and the patient’s medical history.

Patients from both the US and Europe filled out the survey, which was available online from May through August of 2018. Two-hundred patients completed the survey; 55 were male, 145 female.  The average age of patients at the time of the survey was 56.9 years old. Conclusions of the study were as follows:

Duensing acknowledged that definitively assessing cognitive effects is difficult without actual neurocognitive testing and plans to do a follow-up study where this testing would be performed. This would allow for a more definitive quantification of the neurocognitive impact of the specific disease, TKI therapy, and any co-morbidities the patient may be experiencing.

After hearing the previous discussion on the GIST survey, remarking that later there would be presentations on circulating tumor DNA, and introducing the next two speakers, both of whom would be speaking about drugs currently in the pipeline for GIST – Sebastian Bauer, a member of the LRG Research Team from the West German Cancer Center at the University of Essen in Germany, remarked that with all of this interesting research being done, it was “an exciting time to be a GIST patient.”

The study populations were (all were advanced, unresectable GIST ):

Tolerability of the drug was described as “acceptable and in line with many other TKIs”. Activity seemed to be observed across several of the populations- particularly impressive was the response of D842V patients. Among 56 evaluable patients with D842V (across all dose levels) all but 1 had tumor size reduction, and overall response rate (ORR) by central review was 84%. Progression free survival (PFS) in these patients after 1 year was estimated to be 81.3%, with median PFS not being reached, thus showing that antitumor activity in this population was durable. Given that patients with this mutation respond to no currently approved treatments, this data points towards a potentially viable treatment where none currently exists. Additional data from the other lines is forthcoming. Of note was the observation that certain known KIT mutations (V654A and T670I) that render resistance to imatinib may also render resistance to avapritinib, meaning that patients not having these mutations tended towards better response rates.

Adverse events were generally mild (grades 1 and 2) with nausea (61%), fatigue (55%),anemia (46%), periorbital edema (40%), diarrhea (39%), vomiting (38%), decreased appetite (35%) peripheral edema (33%), increased lacrimation (31%), and memory impairment (26%), being among the most frequently reported.  This last adverse event (memory impairment) became a topic of discussion after the presentation. Dr. Heinrich noted they seemed to be both “time and dose dependent” and tended to improve after stopping avapritinib for a short time; because of this, one possible dosing strategy being examined was to halt treatment for a short period of time (about a week or so) approximately every six months, with the theory being that would be enough to prevent these effects.

The DCC-2618 presentation was done by Dr. Suzanne George of the Dana Farber Cancer Institute in Boston. DCC-2618 is being tried in 2nd, 3rd, and 4th line patients. Current data being reported is limited, but there seems to be some activity among GIST patients. Among 114 GIST patients, the overall response rate was 14%, and the 3-month disease control rate was 81%; median PFS was 36 weeks. Detail on data from specific lines will be addressed below. The drug had expected tolerability compared to other TKIs, with the most common more severe (grade 3) adverse event being elevations in lipase levels.

Given the reporting of overall response rates, some time should be taken to say a word about this, summarize the results, and also hopefully provide some perspective. Based on a slide presented at CTOS, here is a summary of the overall response rates of the two drugs discussed above, as well as the second- and third-line drugs currently approved for GIST.  Note that overall response rate is defined as the total percentage of those patients that had partial responses and complete responses:

Having looked at this data, it is clear now why Dr. Bauer made his statement about it being “an exciting time to be a GIST patient.” It is important to note that both avapritinib and DCC-2618 are still currently in trial, so results are subject to change, but it is fair to say that they are promising.

ctDNA – a treatment with future potential

The next three presentations, by Kjetil Boye of Oslo University Hospital, in Oslo, Norway, Cesar Serrano-Garcia of Vall d’Hebron Insitute of Oncology in Barcelona, Spain, and Jon Trent of Sylvester Comprehensive Cancer Center in Miami all dealt with circulating tumor DNA (ctDNA).  Combining the findings from these presentations paints a fairly clear picture of where ctDNA is now, how it is being used, and where it needs to go to become more widely accepted.

ctDNA is a technology that attempts to test what mutations are present in tumors, but uses a single sample of blood plasma, which is less invasive than the multiple biopsies that would currently be necessary to test multiple tumors in the traditional manner. As the technology becomes more sensitive, the hope is that it will become possible to test patients before their tumors become large enough to become too difficult to treat. In addition to being able to report on what the genetic makeup of different tumors in a patient might be, ctDNA also has the potential to more accurately capture results on the complex issue of intratumor heterogeneity – when multiple mutations are found within the same tumor. At this point, some doctors, such as the aforementioned Dr. Trent, are already using ctDNA with some success on a subset of their patients. Dr. Trent gave a few examples of patients with multiple mutations where ctDNA had helped him decide on the best treatment for that patient.  One patient he mentioned having both exon 11 and 13 tumors; as both of these are somewhat responsive to Sutent, he used that drug to treat that patient successfully. Another patient had exon 9 and 17 tumors, and he utilized regorafenib and ponatinib.  Finally, a patient presenting with exon 11, 13, and 17 tumors was given sunitinib, regorafenib, and ponatinib.

While it does have a great deal of potential, ctDNA in its current state also has some limitations. Currently, it appears that ctDNA is only able to detect tumors in 50-60% of cases (based on the CTOS reported studies). The sensitivity of the test becomes low when patients have a lower tumor burden, or if they are responding to TKI therapy. In addition, detection of tumors appears to be more accurate with insertions or deletions rather than substitution mutations. For those patients who meet these criteria, however (larger, metastatic tumors; not responding to a TKI, insertions/deletions) currently this can prove to be a useful tool, as Dr. Trent demonstrated in his presentation. A great deal of effort is being used to help improve these tests, and the hope is that as they do improve they will be able to be used on a wider variety of patients – we will continue to report on this as it develops.

LRG continues to collaborate with medical experts and advocacy partners

In addition to taking in a number of presentations, a number of collaborative meetings also occurred. While attending the SARC pre-meeting (which traditionally kicks off the CTOS session), we met with Dr. Gary Schwartz of Columbia University Medical Center, who has worked with the LRG on a number of projects, and discussed the potential for future collaborations. Similarly, we later spoke with Dr. Ramesh Bulusu, a member of the LRG’s Pediatric and SDH-Deficient GIST Consortium, of Cambridge University Hospital in the UK about strengthening our collaborations to benefit UK GISTers. We then moved on to speaking with representatives from various patient groups, including Annie and Mitch Achee from The National Leiomyosarcoma Foundation, Denise Reinke from Sarcoma Alliance for Research through Collaboration (SARC), Alyssa O’Driscoll from Sarcoma Alliance, and Peter and Sue Wyckoff from Rein in Sarcoma.  All of these groups are eager to collaborate with us in order to help share findings that can benefit all sarcoma patients. A key topic of these discussions was SideEQ (www.mysideeq.org), an LRG platform that helps patients track and manage their side effects. As the platform is not limited to GIST patients but instead focuses on patients with all types of cancers there was a great deal of interest regarding collaborating. In addition, SARC has created a Sarcoma Coalition Education Workgroup that is designed to help sarcoma organizations collaborate on a number of issues, and LRG committed to increased participation in that effort as well.

In summary, CTOS was a very productive meeting that led to the release of a great deal of information of interest to GIST patients, and also paved the way for LRG to further strengthen its collaborations both in GIST and beyond. Attending this meeting further reinforced the point that although patients with various sarcomas may have different diseases, the problems they face, such as further understanding available treatments and managing their side effects, have more similarities than differences and thus lessons can be learned across disease states. With this in mind the LRG will continue to learn and collaborate and share this information with patients and caregivers as much as possible.