News from the 17th NIH Pediatric and Wildtype GIST Clinic 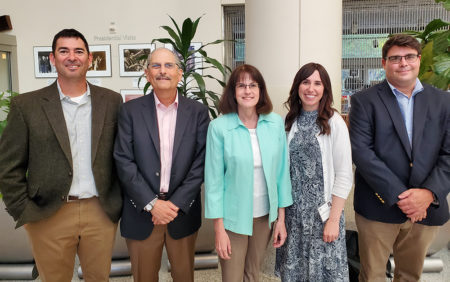 The 17th Pediatric and Wildtype GIST Clinic was held at the National Institutes of Health in Bethesda, Maryland on September 25-27, 2019. The Clinic was a collaboration amongst researchers, specialists, patient advocates, patients and family members, with the goal of furthering the knowledge of SDH-deficient gastrointestinal stromal tumors (GIST) in order to develop more effective therapies. The following is a summary, written by Becky Owens (patient advocate), of the keynote address given by Dr. Lee Helman at the Clinic kick-off presentation.

In 2008, given the rarity of the disease, Dr. Helman wasn’t sure whether they could find any patients to attend the first Pediatric and Wildtype GIST Clinic. He recalled the emotions evident amongst the 12 patients and family members who attended the first Clinic, as they realized that they weren’t the only ones in the world with the disease. In the presence of such an ultra-rare disease, it’s a very therapeutic thing to connect with others in a similar situation. Subsequently, the Clinic has continued to be held on an annual or semi-annual basis every year.

What have they learned as a result of the Clinic?

The Clinics have allowed researchers to gain a better understanding of how the molecular characterization of different Wildtype GIST tumor types determines the clinical outcome. In all but one case, the primary tumor initially developed in the stomach. Frequently, there was more than one tumor present at the time of diagnosis. The most frequent location of metastasis was in the liver. These tumors did not have a mutation in either the KIT or PDGFRa gene, as do approximately 90% of GISTs. As a result of what they’ve learned, it is now recommended that tumor samples from patients without a KIT or a PDGFRa mutation have immunohistochemical (IHC) staining performed in order to determine the presence or absence of the SDHB protein. If the sample stains negative, indicating a lack of the SDHB protein, the tumor can be classified as being SDH-deficient. There are multiple consequences of having a loss of SDH function, which results in a buildup of Succinate within the mitochondria: The presence of too much Succinate poisons the methylation cycle, resulting in a process known as hypermethylation, which turns “off” some genes that should be “on.” Elevated Succinate also poisons the proliohydroxylate enzyme, causing the cells to think that they are aren’t getting enough oxygen, even though they actually are.

Analysis of the tumor samples of the first 85 Clinic participants revealed that approximately 75% had a mutation of the Succinate Dehydrogenase (SDH) gene. Eight out of ten of these SDH mutations were identified as being “germline,” meaning that the mutation was present not only in just the tumor, but also in every cell of the patient’s body. We have two copies of each gene. Those who develop tumors had, for some unknown reason, lost the second copy of the SDH gene in the tumor cells. Patients with a germline mutation can potentially pass the gene on to their offspring. There was a 60% female vs. 40% male prevalence pattern in the GIST Clinic with SDH mutations. Genetic counseling is indicated for family members of patients whose GIST tumor has occurred as the result of an SDH germline gene mutation. The NF1 gene has also been identified as an inherited germline mutation that can cause GIST.

The majority of the remaining 25% of the Clinic participants demonstrated a dysfunction of the SDH gene complex without an identifiable SDH gene mutation. Epimutant GISTs are not caused by a coding sequence alteration, but rather by an alteration in the environment outside of the DNA. These patients can be described as being “epimutant”. In such cases, SDHC function is shut off by a process called methylation. These patients are typically younger, with an average age of 15 at the time of diagnosis, and are overwhelmingly female (with a 99% female predominance). Family members of those with epimutant GIST are not felt to be at risk for tumor development therefore genetic counseling for family members is not indicated.

SDH-deficient patients, whether mutant of epimutant or not, should be screened for paragangliomas, which have been noted to occur in about 33% of the Clinic participants. The median age for development of the paragangliomas was approximately 40 years of age, so awareness should be maintained that they can occur later in life. A paper recently published in the U.K. recommended the following guidelines for children with inherited SDH mutations: Those with SDHB mutations should begin being screened (physical examination and blood draw looking for markers of paragangliomas) beginning as early as age 5; with full body MRI screening commencing at age 10. Physicals and lab work should be initiated for those with SDHA, C, or D mutations at age 10; with full body MRI screening commencing at age 15. Early detection of paragangliomas is important as paragangliomas often occur singly, and early surgical removal can be curative.

Future directions: Further study is needed to understand how specific SDH mutations and epimutations will predict how a patient’s tumors will behave. SDH-deficient GIST tumors don’t respond to Gleevec; though it is felt that Sutent and regorafenib most likely slow tumor growth due to inhibition of the VEGF pathway. SDH-deficient mouse models and cell lines are needed which could help to be predictive of the effectiveness of a therapy before trying it on patients. There is a cell line available that has an SDH plus a RAS mutation; however, the presence of the RAS mutation could influence the results. They’ve had a hard time growing single-mutation SDH-deficient GIST and paraganglioma cells and are trying really hard to do so.

In his concluding statements, Dr. Helman expressed his gratitude to the Clinic patients, past and present, for their participation. Through their help and cooperation, much has been learned about the biology of SDH-deficient GIST. The researchers and specialists involved with the Clinic are working diligently to apply this knowledge in order to develop better therapies.