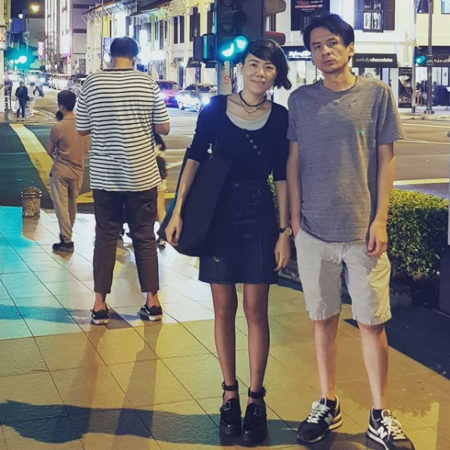 My husband Andrew and I have been together for 22 years. We thought we led relatively healthy lifestyles, so we were both shocked when he was diagnosed with GIST at 44 years of age, earlier this year in April.

Andrew experienced abdominal pain so severe an ambulance had to be called, and a CT scan at the hospital revealed a 9-cm grapefruit-sized tumour on his small intestine. The pain was caused by the tumour pressing against his intestine and causing a partial obstruction. He was operated on several days later, and 5 cm of jejunum was resected along with the tumour. Margins were clean, but he is considered high-risk due to a high mitotic rate. The tumour report revealed the mutation to be an exon 11 deletion.

I was a piano teacher and performing pianist for the past 13 years but stopped work completely this year so I could spend more time with Andrew and see to his needs.

We were so lost in the beginning because we did not know what to expect, due to the relative rarity of GISTs. We live in Singapore where there are no GIST specialists, so we could not consult with anyone in person to find out more. But thanks to the Internet, we were able to access medical websites and research papers, from which we learned about the importance of mutation testing, and that a drug – Gleevec – exists to treat this condition.

The greatest help for me though, has been finding various GIST support groups, including the Life Raft Group. Connecting with other GIST patients and caregivers worldwide has given me so much more insight as to what to expect, and how to cope with many of the challenges faced.

I am very happy to be the country representative for GIST patients here in Singapore, as I will never forget how much help I got from the various GIST networks I am now a part of. So many people can benefit from the information-sharing and emotional support these communities can offer. It is vitally important for both patients and caregivers to realize that they are not alone in this, and a wealth of information and support is available at their fingertips!