The State of GIST Treatments

Many therapeutic options are available but matching the right patient to the right drug is still a challenge.

Flashback…it’s June 2016, and I had just attended the American Society for Clinical Oncology (ASCO) conference in Chicago. Though this was not my first ASCO, a few things were different this time. First, there was a significant increase in posters and presentations about immunotherapy. In prior conferences this topic was represented by about 20% of posters and presentations; now it was closer to 70 or 80%, but nothing specifically for GIST.

That also pointed to the other thing (or lack of a “thing”). Not only weren’t there any new drugs being touted for GIST, but there didn’t seem to be any on the horizon. Worse yet, when talking to researchers and clinicians about this, I discovered that there wasn’t a lot of interest in research devoted to GIST since there were already plenty of therapies available. There also seemed to be an attitude that other, more immunotherapy-sensitive diseases were “hotter.”

This was troubling. While we were lucky enough at that time to have three approved therapies for GIST (Gleevec, Sutent, Stivarga), it was well known that they didn’t work for every patient. Also, of note was that these drugs were originally developed with another disease besides GIST in mind, and that GIST had kind of “gone along for the ride.”

The future for new GIST treatments looked bleak. However, here’s the thing about the future. It’s hard to predict, because it can (and often does) change.

Fortunately for GIST patients, that’s exactly what happened, and the last couple of years have seen a plethora of newly approved drugs. Where before there were three just aimed generally at GIST patients, there are now six, many aimed towards specific subtypes that before had nothing, with a seventh on the way. Perhaps even more exciting – a few of these drugs were developed “from the ground up” for GIST specifically. In addition, contrary to what we feared, new research in GIST is happening, and there may be even more therapies around the corner.

The history of GIST could arguably be divided into two phases. Before Gleevec and after Gleevec. The impact of Gleevec on GIST patients could not possibly be overstated, and one can argue that the impact it had on the general world of cancer was almost as profound, as it ushered in the age of targeted therapy. What many may not know, however, is that Gleevec was not originally developed for GIST, but for chronic myelogenous leukemia (CML). 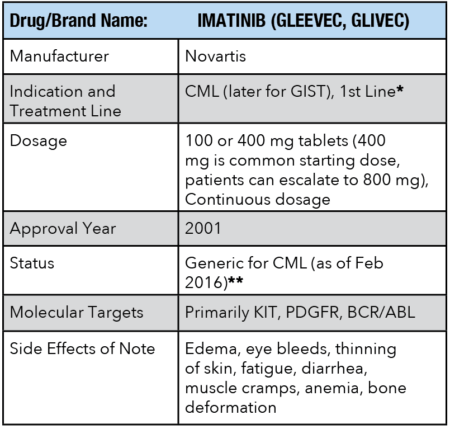 *1st, 2nd, 3rd or 4th line refers to the sequence in which the treatments are given

**Please note that Gleevec for CML became available as a generic in 2016 in the U.S., however, the patent for Gleevec for GIST expires in 2020. Patients in the U.S. are prescribed the generic as their doctor/healthcare situation indicates. Globally, patents vary by country and your individual situation may be different.

The impact of Gleevec is truly remarkable. While the high numbers for median progression free survival (PFS) reported in the trial and afterwards are quite impressive (24 months in the trial, and later numbers trend much higher). Although not the norm, what is even more impressive is the durability of responses. In our LRG Patient Registry we have tracked a handful of patients that have continued to respond for twenty years or more.
One just needs to look at the news even today where oncology drugs that report median PFS numbers of 6 months or less are lauded as “breakthroughs” to see how truly amazing that is.

Gleevec was a game changer, but not all patients responded to this therapy. For patients that progressed while on Gleevec, another option was needed. That option became available in 2006, when Sutent was approved. 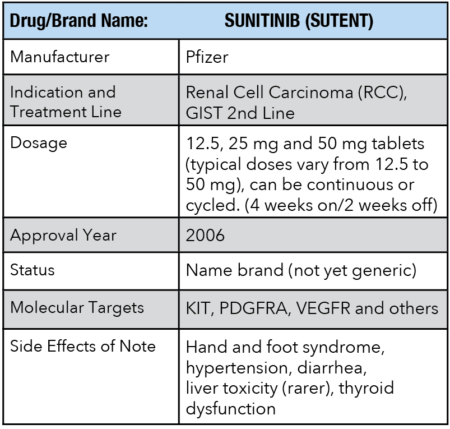 While some of the molecular targets of Sutent were common to those targeted by Gleevec (KIT, PDGFRA), others were not (VEGFR). In addition, some patients with particular submutations (i.e., KIT exon 9 as opposed to KIT exon 11) seemed to do better on one drug than the other. While the median PFS numbers were not as high as those seen with Gleevec (remembering of course that these patients were primarily 2nd line, so that comparison was not really apples to apples), it was better to have a second option when Gleevec failed than to have nothing at all.

Thus, there was room for yet another weapon in the arsenal, and that came a few years later in the form of Stivarga. 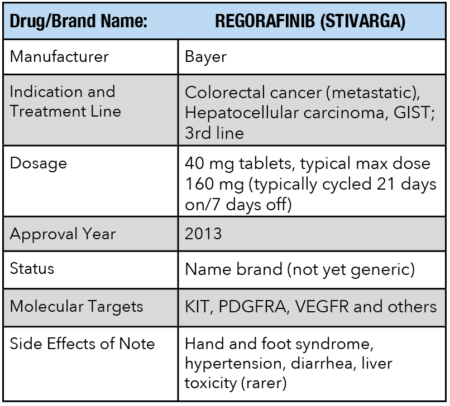 As is shown in the table above, Stivarga hit many of the same targets as Sutent, but again, in some cases patients would respond to one drug but not to the other. This was often due again to a specific submutation. The problem, however, was that in many cases, GIST patients were never given mutational testing in the first place, meaning they simply moved through each of the approved lines as they progressed. Obviously, this was not the optimal way to treat patients, and that situation needed to change.

The Life Raft Group continued to speak to clinicians and standard-settings bodies, and little by little, the rates of testing increased, but at a much slower rate than anyone wanted. Luckily, some changes in therapeutic approaches were on the horizon that would help drive home the necessity of mutational testing – changes we will profile in the next section.

The Next Wave – Hyper-Targeted Therapies

It is important to keep in mind that many rare cancers have no therapies available. By 2013, GIST patients were fortunate enough to have three to choose from – or at least, some GIST patients were. While there was anecdotal information that some of the approved medications worked better for specific mutation and exon combinations, none of them were approved for something so specific – instead they were based on much more general indications. Here are the indications for GIST taken from the prescribing information for each of the three previously mentioned approved drugs. 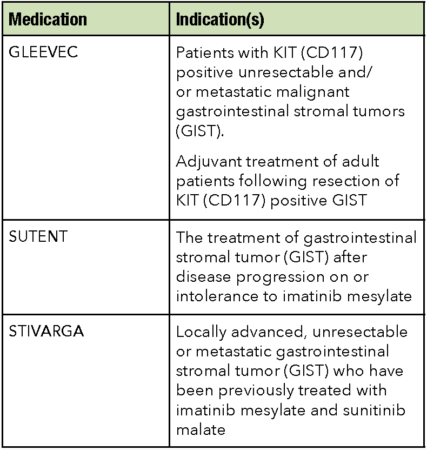 As you can see, there are no specific mutation/exon combinations directly mentioned. Basically, they just identify that the patient should have GIST, and then specify which “line” of medication – i.e. when to sequence them based on the failure of the previous therapies.

Luckily, the next round of drugs changed that approach. They all aimed at more specific subsets – in some cases general mutation and exon combinations, and in other cases very specific mutations/genetic events. Perhaps most importantly, these therapies required patients to have specific mutational testing to ensure they had these mutations/genetic events before being prescribed the medication.

The first of these new drugs was larotrectinib, which when approved would be named Vitrakvi.

This was a unique drug in many respects – first, it was approved not for a specific disease, but instead for a particular target – the NTRK gene fusion. 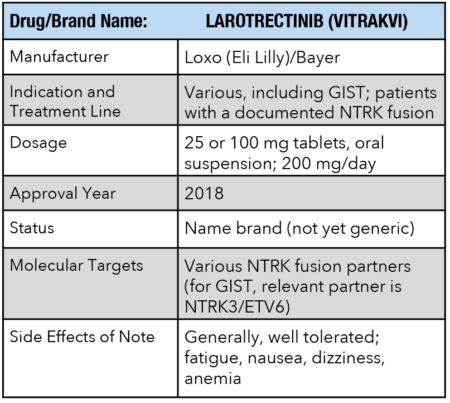 Gene fusions occur when parts of two genes join or “fuse”. A simple analogy would be if you and your friend decided to switch shirts. Shirt from “A” is with the pants from “B” and vice-versa. Gene fusions occur in various cancers, and Vitrakvi was essentially approved for many of them simultaneously – anywhere where NTRK had a fusion “partner” (which is what the other gene that fuses with NTRK is called).

NTRK fusions exists in GIST are rare. The most common fusion partnership is between NTRK3 and ETV6.

What was also unique about Vitrakvi was that it required the patient to have a specific test verifying the presence of an NTRK fusion before it could be prescribed which helped to usher in the era of more specific drugs tailored to a patient’s unique mutation.

Patients on the trial had extremely high response rates for extended periods of time.

This is not surprising considering that the drug was optimized to the patient’s specific molecular makeup. This would be a recurrent theme in the drugs to come.

Shortly thereafter a second drug for NTRK fusions was approved, which was somewhat similar to Vitrakvi called entrectinib. 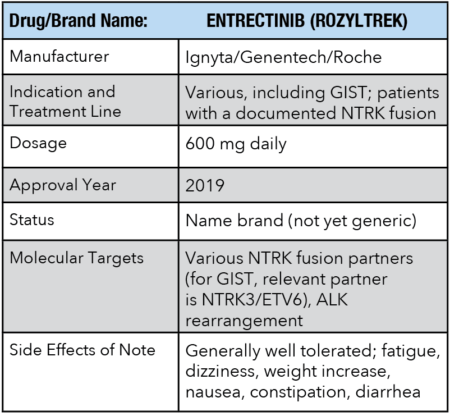 The biggest difference between the two drugs is that Rozyltrek has additional benefit for lung cancer patients, but as far as GIST they are fairly similar, with side effects varying a bit in some cases.

While the two NTRK drugs were a welcome addition, and especially because of their emphasis on the need for mutational testing, NTRK is exceedingly rare, so in reality the landscape had not changed that much for most GIST patients.

Luckily, a pair of drugs were just on the horizon – one has been approved, and another is still in trial with expectations of being approved soon. These drugs seem to have hit the “sweet spot” of utilizing mutational testing to target specific targets that are prevalent in many patients and they have been designed from the very beginning with GIST patients in mind. 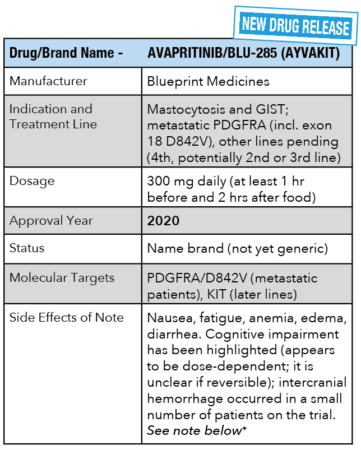 + We have met with Blueprint Medicines to discuss these side effects as they navigate their GIST journey. It is our intention to keep patients informed about all new treatments.

The first of these is Ayvakit, approved on January 9th, 2020, known as avapritinib and BLU-285 when it was in trial. Its initial approval was for metastatic GIST patients with a PDGFRA mutation (which represents anywhere from 5-8% of all GIST patients) including those with the D842V mutation – a combination that was resistant to all previously approved treatments.

Ongoing trials are underway for everything from 2nd through 4th line, including patients with KIT mutations. Blueprint Medicines required patients to undergo mutational testing as part of their trial protocol, and now that it is approved, they will also require testing to receive the approved drug. Because of this, it is again perhaps not a surprise that the response rates observed in the trial were significantly higher for some patients (specifically D842V) than we are accustomed to seeing. To further underline the importance of mutational testing, Blueprint Medicines has also created a campaign that can be accessed via http://www.mutationmatters.com/

Currently, these are all of the approved drugs for GIST

Considering that just a few short years ago there was concern that no new therapies would be available, that is quite good news. In addition, to these approved drugs, there is another drug currently in trial that has the potential to help a lot of GIST patients.

Like Ayvakit, ripretinib from Deciphera is also a targeted drug designed from the ground up for GIST that requires a mutational test to be utilized effectively. What differentiates it is that it hits a wider variety of targets, so it has the potential to be of even greater benefit. 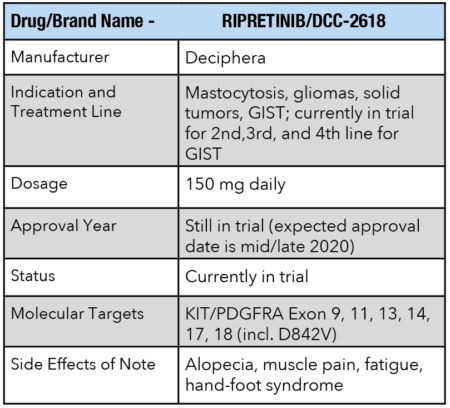 As illustrated above, ripretinib hits multiple targets and is generally well tolerated, so it has the potential to be a true game-changer for GIST patients.

In summary, the landscape for GIST has changed a great deal since I left that ASCO meeting in 2016. Where we had once had only three available treatments aimed broadly at GIST patients and not addressing some subtypes, we now have six, a few of which are designed to target specific subtypes, with a seventh potentially to be released soon. The rationale for mutational testing has also become much clearer, and pharmaceutical companies are beginning to require it as a precursor to prescribing their medications (and in some cases offering to pay for it if it is not covered by insurance) – a development we can all be happy about.

I am fairly confident we will continue to see progress for GIST patients for the near future and beyond. Although we embrace the progress being made, we recognize we still have a long way to go while there are still no treatments available for rarer subsets of GIST.