Hope & Obstacles Along a GIST Journey

Many GIST patients around the world struggle with getting the treatment they need to survive and thrive. Access to a GIST specialist, mutational testing and effective drug therapies can be limited by a local oncologist’s knowledge of GIST, a country’s access to specific drugs and access to researchers and clinicians that can assist in creating an effective treatment plan. Arun Krishnan’s story illustrates how collaboration between patient groups and doctors across the globe can affect patient survival. 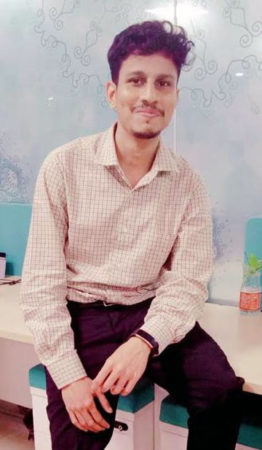 At 19, Arun Krishnan was a busy university student, following in his older sister Deepa Balakrishnan’s footsteps, working toward his degree in software engineering. The youngest of three children, he attended classes in the city of Chennai in southeastern India. In 2009, Arun was plagued with chronic stomach pains, untreated until they proved too much to bear.

The family’s primary care physician, believing that Arun could be suffering from appendicitis, referred him to a surgeon. The surgeon discovered a mass in the jejunum (the part of the small intestine between the duodenum and ileum). Upon biopsy and immunohistochemistry staining, it was determined that the mass was a GIST. After recovering from the primary surgery, Arun began imatinib in July of 2009.

For the next two years, Arun dealt with living with the side effects of imatinib, the passing of his father in 2011, finishing his studies, and a recurrence in his liver which necessitated a hepatectomy. After the surgery, Arun continued imatinib until 2015 when his oncologist declared him NED.

His sister, Deepa, who moved to the U.S. in 2014, commented about that period of time, “The doctors told us that Arun had GIST but never talked to us about resistance or mutational testing or the importance of regular scans and continued treatment.”

In 2016, while working as a software engineer in the U.K., Arun began to experience stomach pains once again. He returned to India and it was discovered that there was recurrence in the liver and the walls of the peritoneum. As surgery was determined not to be an option at this point, Arun resumed taking imatinib and had regular scans remaining stable until 2018.

A third recurrence occurred in 2018 and Arun underwent CyberKnife radiation at Apollo Specialty Cancer Hospital in Chennai in the liver which produced only a partial response. Treatment with sunitinib followed but that brought many side effects that left it too difficult for Arun to continue. Regorafenib also produced too many side effects and did not stop progression.

Deepa, now living in California, was referred to The Life Raft Group by a relative in the U.S. Deepa joined the LRG as a caregiver. Sara Rothschild (Vice President, Strategic Planning) and Sahibjeet (Sebbi) Kaur (Patient Registry Supervisor) helped Deepa and Arun with next steps and options for treatment.

“Deepa was referred to me probably because it was considered an international case and the first thing I want to say about her is that she is persistent, advocating on her brother’s behalf. Arun was on regorafenib at the time of contact and this line of treatment was not successful,” Sara shared.

Sara and Sebbi worked with Arun’s doctor and encouraged him to have mutational testing performed. Arun’s doctor believed at this point that Arun was out of options, but as they worked with the doctor, they were able to convince him to join an LRG Virtual Tumor Board. At an LRG Virtual Tumor Board de-identified cases are presented to an international roster of GIST specialists and experts who brainstorm on cases for which doctors are searching for options. The Tumor Board took place in February of 2019. Among their suggestions was the joint belief that mutational testing was necessary and after that testing was performed, it was determined that Arun’s mutation was KIT exon 17.

Sara also introduced Deepa to Dr. Nikhil Guhagarkar, GIST patient, dentist, nutrition for GIST expert, and member of the LRG & Friends of Max in India. Dr. Guhagarkar sent Deepa and Arun to Dr. Sameer Rastogi, a GIST specialist at the All India Institute of Medical Sciences (AIIMS) in New Delhi.

With this new information about his specific mutation and a GIST specialist on his case, it was determined that avapritinib would be the next appropriate line of treatment to try. Unfortunately, avapritinib was not yet approved by the FDA and therefore couldn’t be used in India. Sara was able to reach out to Blueprint Medicines, which produces avapritinib*, and facilitate the application for compassionate use. In addition, approval was needed by the hospital to actually use this non-FDA approved drug and much documentation was needed to facilitate this approval as well, a job that Sara and Dr. Rastogi worked tirelessly on. A timely institutional approval was provided by the director of AIIMS, New Delhi which was very helpful.

“It was a sort of trifecta of right place, right time, right people. I’m going to guess that it might have been the first case to get compassionate use for Blueprint in India. And I feel like it set a precedent for future cases in terms of compassionate use and formed a relationship with Dr. Rastogi and his patients,” said Sara.

Arun said, “Hats off to the Life Raft Group organization who has always offered a helping hand to their level best whenever we were in utter dismay and supported us with the right treatment at the right time. There are no exact words to describe our gratitude towards the Life Raft Group members and the doctors who have helped me to lead a better life.”

Arun began avapritinib in September of 2019. Though he experienced fatigue among the side effects, Arun was able to keep working. Three-month scans showed a good response, but in February of 2020 subsequent scans showed mild progression. Due to this progression, he had to stop this line of treatment and now Dr. Rastogi is pursuing compassionate use for ripretinib, produced by Deciphera, which is expected to be approved by the FDA in 2020. Again, Sara helped Deepa and Dr. Rastogi contact Deciphera and the request is now in progress.

While he awaits approval to take this new drug treatment, Arun is determined to continue his normal routine, not wanting to sit at home focusing on GIST. He is hopeful for his future and expresses it beautifully:

“Above all, I am so grateful to my mom, dad and my other sister who have supported and taken care of me throughout this journey. My mom is the pillar of positivity and strength for me always, my dad who is no more but was a symbol of selflessness and unconditional care before my tumor recurrence and my sister Ratna who is a source of moral support for me and is always there to share my feelings. Without them, I would not have been able to face this brutal challenge of my life.”         – Arun Krishnan, age 29, Chennai, India

*January 2020 avapritinib was approved by the FDA and is now marketed as Ayvakit.