What GISTers Need to Know About Clinical Trials 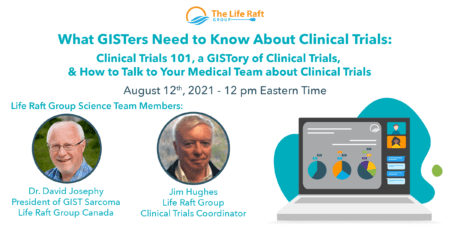 Clinical trials are an essential tool of modern medicine. We have heard a lot about clinical trials of COVID-19 vaccines and therapies during the pandemic, and most GISTers are aware that clinical trials established the effectiveness of drugs like imatinib. However, beyond the headlines there’s a lot to consider when evaluating a clinical trial – especially if you are considering enrolling in one. Who designed the trial? Who approved it? Who is paying for it? Who decides which patients will be enrolled? How will the results be evaluated? And what’s the relationship between clinical trials and “real world evidence”?

David Josephy, PhD.
President of Life Raft Group Canada
David Josephy was a Professor of Molecular and Cellular Biology at the University of Guelph in Ontario, Canada, until his recent retirement. He authored a textbook titled, “Molecular Toxicology”, and has written more than 100 scientific publications in biochemistry, toxicology, and cancer research.

Jim Hughes
Life Raft Group Clinical Trials Coordinator
Jim Hughes attended Kenyon College and Loyola University, Chicago where he earned a BA in Philosophy. Between schools Jim served three years as an enlisted man and officer in the United States Army in the US and Vietnam. Jim retired from the telecommunications industry after a 35-year career including positions in engineering, long-range planning, and marketing. Jim and Margi are the parents of two children Nancy and Jamie. Nancy Hughes Welsh (1967-2005) was an early member of The Life Raft Group (2002). Nancy was diagnosed with leiomyosarcoma in 1991 at age 23. After ten years of surgery and chemotherapy Nancy was re-diagnosed with GIST in 2001. Nancy participated in the Phase Three imatinib trial in 2001 and the Phase Two sunitinib trial in 2003. Jim and Margi continue to facilitate the LRG Chicago chapter meetings. Jim serves on the Board of the LRG and is a member of the LRG Science Team.