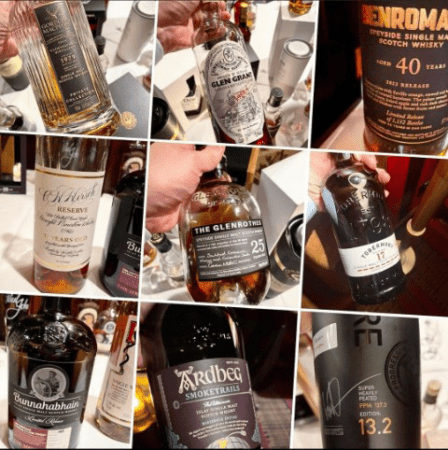 On November 2nd, the Life Raft Group and I hosted the 5th Water of Life Fall Event, the WOLF. This annual “Once in a Lifetime” event is a gathering of several philanthropic whisky enthusiasts, as well as some of the greatest brands, whether their Ambassadors, Importers, Distillers, Retailers, Auctioneers or Owners. With the dinner portion held at Keen’s Chophouse and Cigar Hours at the Carnegie Club, folks get the opportunity to experience wonderful flavors all in the name of charity.

This year we had several returning favorites as well as a few new attendees. Flying all the way from Scotland for his first WOLF Iain Allen brought us not one, but 2 Glen Moray Whiskies straight from 2 very different casks, after 34 years of aging. Sadly, another Iain, Iain McAlister was unable to make it, so he graciously shipped over a Glen Scotia still in the cask, from 1991. Robin Coupar and Raj Sabharwal also were unable to attend, but the 1958 distilled Glen Grant from Gordon & Macphail and the 1989 Linkwood from Blackadder were fantastic to enjoy.

We raised Raj’s dram both to those we have lost since we started our first event, and those unable to attend this year. Speaking of Gordon & Macphail Richard Urquhart was in attendance and brought us an amazing 1979 Glentauchers as well as a 40 year old Benromach. Add in our opener, a rare waxed AH Hirsch from the 1980’s from Joe Hyman, the 1988 Bunnahabhain from Sam Roe, the 25 year old Glenrothes from our newest Lifer Jennifer Blair, three wonderful and unique Benriachs from long time Lifers Gary Pickard and Greg King, a Keeper of the Quaich Talisker from

Pat McCarthy at Bayway, the newest Octomore 13.2, our annual closer for part one of the event from Jason Cousins of Bruichladdich, and a wonderful 21 year old Canadian Rye called “Good Day” (how apropos) from Dave Schmier and Batch Three of Flintrock from JJ Corry and Jena and you certainly have the makings of a ridiculous dinner. Several of these “Show Stopping” drams alone were worth the price of admission, but when you have the opportunity to try them all, and enjoy an amazing meal there really is no way to have a description do it justice. Then onto part two. 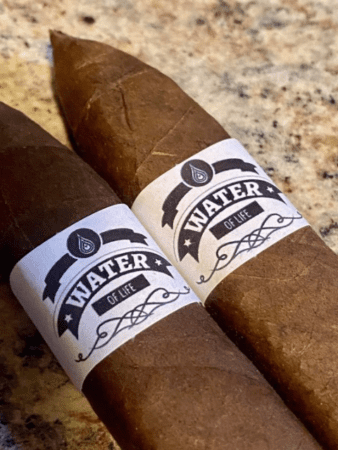 Cigars were a big hit, as we had our first ever branded cigars (see photos, thanks Yoni), and the opportunity to pair them with several amazing drams. John Glaser, who’s company Compass Box has been a supporter since year one donated his wonderful Three Year Old Deluxe whisky (IYKYK), Forbes Malcom from the Loch Lomand Group gave us a delicious Loch Lomand aged in Kerr wine casks, and among the other mouth watering gems there was a 17 year Tobermoray, an 18 year old Glenrothes, and Matt Hoffman himself and long time lifer Devin Volardi of Westland came by with some unreleased samples because “why not?”

Pat had an old Bayway selection of a single cask Bruichladdich finished in a rum cask as well, though apparently his Uber consumed about a third, lol. Even our guests pulled out some bottles to try and the Ardbeg Smoketrails made an appearance as well. Thanks James. On top of all of this, Ewan Morgan from Diageo made an outstanding donation of a set of sought after samples, including the Talisker 30 year old. The winning bid was $675, truly making someone quite happy!

All in all this was one of our greatest and most memorable events. Raising close to $12,000 for The Life Raft Group certainly was icing on this many layered cake. The food, the pours, the sticks and the company were all incredible and we look forward to doing this again next fall. Perhaps you can join us next year when we raise our glasses and Drink Whisky to Fight Cancer, but be quick, tickets do sell out quickly. Can’t imagine why. :-)