From hearts and flowers to skulls and daggers, tattoos grace the bodies of millions of people across the globe whether they are rock stars or neighborhood housewives.

Although many choose this once rebellious art form to represent love, hobbies, or special occasions, one milestone that is beginning to make its mark in the tattoo industry is cancer survival.

“This event took off like wild fire last year,” said Mike Haines, owner of Biographix. “We raised $1000 for the [American Cancer Society] in ’09. We hope to generate more this year, but it’s more about getting the word out there that you can survive this. Hope this year’s will be even bigger!”

So what is an appropriate image for a cancer survivor tattoo? Pink ribbon tattoos, for example, symbolize breast cancer awareness. Words such as “Survivor,” “Hope,” “Faith,” and “Courage” can also represent someone’s battle with cancer. Some people choose images that symbolize beating the disease.

“Most survivor tattoos involve a ribbon for sure,” he said. “Also, many people include important dates for milestones. The idea is to create a fitting tribute, so any imagery that ties into the struggle, journey, and family all works.

“One of my memorable tattoos is the word hope created out of the cancer ribbon. It seemed to strike a chord, and I’ve had numerous 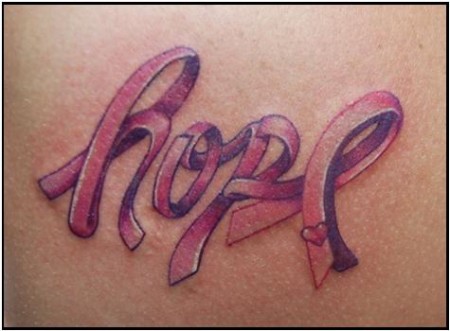 requests for it. I’ve had people fly in and get other words created out of ribbon as well.”

LRG member Jennifer Engstler of New York chose a sea turtle for her tattoo after falling in love with the animal while diving in Indonesia. She also admired the symbolism of the sea turtle, including intelligence and long life.

“I know the symbolism of the turtle became a lot stronger after I was diagnosed, that is for certain,” Jennifer said. “When I look at it, I recall the absolute peace and beauty I had when I first went diving there… it relaxes me when I’m anxious.”

There are, however, risks involved when getting tattooed, and patients taking Gleevec or other cancer treatment drugs have additional concerns, according to Dr. Jonathan Trent of MD Anderson Cancer Center in Houston.

“I would not recommend getting a tattoo while on Gleevec,” Dr. Trent said. “The tattooing process may result in adverse reactions that could be confused with Gleevec toxicity. This could result in unnecessary delays or discontinuations of therapy.”

According to MayoClinic.com, if the equipment used to create your tattoo is contaminated with infected blood, you can 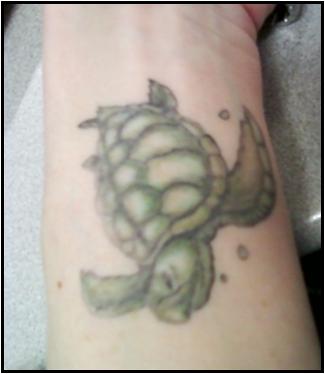 “Viral hepatitis is rare but can occur as a result of poor sterilization procedures,” Dr. Trent said. “This could damage the liver and decrease the ability to tolerate Gleevec.” Some medications – such as Gleevec and Sutent – can cause a thinning of the skin that may make healing more difficult. Life Raft Group member Steven Petrera of New York and Naples, Fla., was taking Gleevec when he got a tattoo.

“He knew that bleeding easily was a factor since he would only lightly scrape his skin and bleed,” said his wife, Annette. “He didn’t bleed much at all as a matter of fact.”

Jennifer got her tattoo while taking Sutent and said the healing time took a little longer but was minimal.

According to the Centers for Disease Control website, tattoo shops should take the following precautions:

Use single-use, disposable needles and razors. Disposable piercing needles, tattoo needles, and razors are used on one person and then thrown away. Reusing needles or razors is not safe.

Safely dispose of needles and razors. Used needles and razors should be thrown away in a biohazard-labeled, disposable container to protect both the client and the person changing or handling the trash bag from getting cut.

Wash hands before and after putting on disposable gloves. Gloves are always worn while working with equipment and clients, changed when necessary, and are not reused.

Frequently clean surfaces and work areas. Chairs, tables, work spaces and counters should be disinfected between procedures to protect both the health of the client and the artist. Crosscontamination (spreading bacteria and viruses from one surface to another) can occur if surfaces are not disinfected frequently and between clients.