Here are updates from the American Society of Clinical Oncology conference on three GIST  clinical trials.

LBH589 in GIST was first discussed by another LRG Research Team member, Maria Debiec-Rychter, at Life Fest 2006 in Dallas. Subsequent data published by Maria, Sebastian and others in two separate studies in 2009 showed panobinostat plus imatinib to be therapeutically active against imatinib resistant human GIST tumor biopsies grafted into mice and in GIST cell lines. HDAC inhibition theoretically works independently from GIST mutation status so this is a potential third line therapy.

The study objective was to establish maximum tolerable dose and safety. Imatinib 400 mg was administered along with escalating doses of panobinostat. At the maximum tolerable dose (MTD) of 20 mg administered orally three times per week with 400 mg imatinib daily there were seven adverse events at grade 3 and higher. Limited activity was seen on PET scans with one partial response and eight stable disease for a 75% benefit rate based on metabolic response criteria. There were no objective responses (tumor shrinkage on CT scans).

Daruka Mahadevan, MD at the Arizona Cancer Center in Tucson, Arizona, reported on a Phase 1 trial of HSP90 inhibitor called AT13387 from Astex Pharmaceuticals headquartered in Cambridge, UK, and also in Dublin, California. Many will recall the Phase 3 trial of HSP90 inhibitor IPI-504 that failed in GIST because of toxicity. There were high expectations that HSP90 inhibition would work in GIST based on preclinical activity. Unfortunately IPI-504 shared the toxicity profile of the first generation of HSP90 inhibitors that were based on geldanamycin, an antibiotic derived from soil bacteria. AT13387 is a second generation small molecule HSP90 inhibitor discovered by Astex Pharmaceuticals via a screening process. AT13387 is being developed under a five-year agreement with the National Cancer Institute.

The primary objective of the trial was establishment of a MTD dose. Patients were dosed once or twice weekly in four -week cycles with three weeks on and one week off the drug. AT13387 is given as an IV infusion over one hour. Fifty- three patients with different solid tumor types have entered the trial. Six patients experienced adverse events that were generally reversible. The MTD will be 260 mg/m2 administered once weekly. Seven GIST patients entered the trial. One GIST patient with both a primary Exon 11 mutation (Del 558- 572) and secondary Exon 17 mutations (D816H & D820H) had an objective Partial Response for eight months. Two other GIST patients had stable disease lasting seven months and eleven months. The Phase 1 trial continues to accrue at the MTD. A Phase 2 study of imatinib plus AT13387 is ongoing at eight sites in the US. 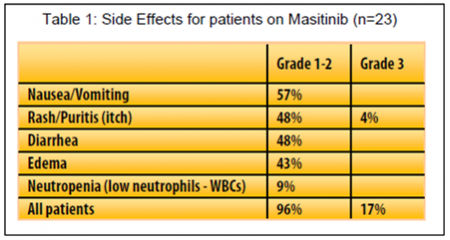 Dr. Adenis reported that Median Progression Free Survival (PFS) was virtually the same, 3.7 months for masitinib and 3.8 months for sunitinib based on investigator measurements using RECIST criteria. Median Overall Survival (OS) for masitinb had not been reached. For sunitinib it was reported at 16 months.

Most side effects on masitinib were reported as Grade 2 or less and followed a pattern typical of tyrosine kinase inhibitors.

During the discussion after the presentation Bob Benjamin from MD Anderson asked if masitinib had an Overall Survival advantage because patients in the sunitinib arm were not able to crossover to masitinib. Seventeen of 23 of patients receiving masitinib were given sunitinib on progression. Patients progressing on sunitinib did not have an option to receive masitinib. In his response Dr. Adenis acknowledged that Dr. Benjamin was right, this was an issue.

It was also noted by another questioner that progression free survival was relatively short for both masitinib and sunitinib patients.

In his conclusion, Dr. Adenis indicated that a Phase 3 trial of masitinib versus sunitinib sponsored by the manufacturer had recently started and that the primary endpoint would be Overall Survival.

In sum, the report of the trial of masitinib versus sunitinib seemed promising but raised several issues about reported results and trial design. In light of the results of the Phase 2 trial presented in June, it will be important for the phase 3 trial comparing these same two drugs to address the PFS and overall survival questions. Masitinib also seems to have a relatively better side effect profile. Hopefully a Phase 3 comparison trial can establish an improvement in side effects and quality of life. Given the harshness of many tyrosine kinase inhibitors, a TKI that can demonstrate equivalent clinical benefit and at the same time definitively reduce side effects and improve quality of life would be a major benefit for GIST patients.