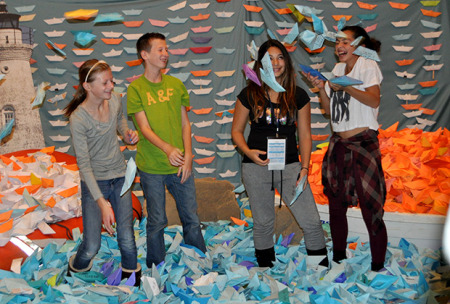 One hundred and thirty thousand wishes, tributes, memories, goals, and dreams greeted me on arrival to the Life Raft Group’s Life Fest 2014. They were in the shape of origami boats. From a distance, the boats formed a colorful display of water, two life rafts, and a lighthouse backdrop to guide the way. Yet up close, each boat had a name, a message, and personality. In that moment I realized it is in our nature to group things together to see a number – a statistic, but the display gently reminded me that it only takes a moment to look close and see the individuality in a gathered mass. From that point on – as many patients, caregivers, researchers, and supporters filed in – I didn’t see the number of a gathered mass, I saw individuals.

My sight wasn’t the only thing that changed during my stay. After a few years of patient advocacy, my motivation tanks were near empty. As health-issues on top of life-issues weighed on me, I waivered in my goal to do as much as I could while I could, but the Life Fest was exactly what I needed to refuel. I got the absolute pleasure to pull the pediatric patients, siblings, and young family members out of the adult GIST research meetings and hold our very own brainstorming session. I couldn’t write fast enough after first idea landed on the table, and I was inspired by this new generation of cancer fighters. We had so much to offer that we decided one morning session wasn’t enough. We joined again the next day and continued our quest to represent our type of GIST better. If we can accomplish even half of the things on my list, I just know pediatric and wildtype GISTers won’t have to ask “what about us?” ever again. 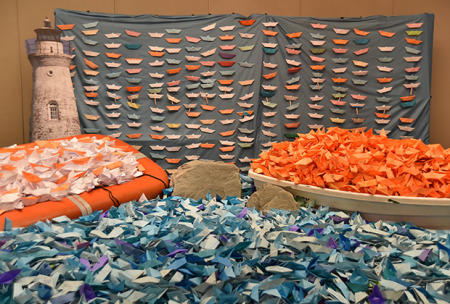 Over 130,000 Origami boats diplayed at the Teaneck Marriott at Glenpointe in New Jersey for Life Fest 2014.

It would take pages to write about all the wonderful and touching moments that happened during the three-day gathering. We laughed a lot, cried some, learned much, and bonded in ways most strangers never would be able to do. It wouldn’t have been possible without a number of sponsors and generous donations. Nor would it have been possible without the countless hours the Life Raft Group staff and volunteers gave of themselves. I attended Life Fest by myself, but left an international family wishing me all the best. That in itself is priceless, yet the hope given to us all is the treasure we will cherish forever.

Thank you, LRG, for making this possible, for leading the way in patient advocacy, but mostly for being the family that I am humbly honored to be part of.