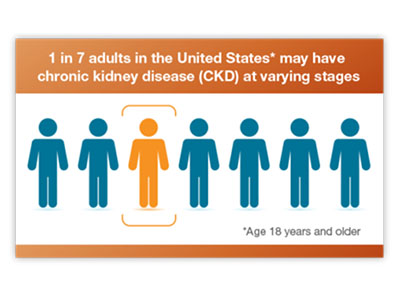 Injury to the kidneys can occur for a variety of reasons in patients with Gastrointestinal Stromal Tumors (GIST). In some cancers, such occurrence may be associated with the cancer treatment, radiation, or the disease itself. To some extent, comorbidities and concomitant treatment as well as lifestyle associated risk factors have also been linked to kidney disease.

In GIST, imatinib shifted the treatment paradigm in cancer. Those patients who are responsive to the drug have a longer life expectancy. Along with this are a set of challenges that patients face in improving quality of life. Preventing kidney disease is one of them. It is important to learn about kidney disease, causes, risk factors, treatments and pro-active measures that patients can apply across the continuum of GIST care.

What are the Kidneys and Their Functions?

Kidneys are a pair of bean-shaped organs that are located towards the back of the abdominal cavity on either side of the spine. Each kidney is composed of about a million nephrons, serving as the functional unit, headed by a glomerulus, responsible for filtering the blood and turning filtrates into what will become urine. Their main function is to help maintain water and electrolyte balance within the body. They also have an important role in producing several hormones and enzymes such as erythropoietin (for production of red blood cells) and renin (plays a role in maintaining blood pressure), and to help covert Vitamin D into its active form which is essential for healthy bones. In addition, they aid in the excretion of wastes and foreign compounds, such as medications. 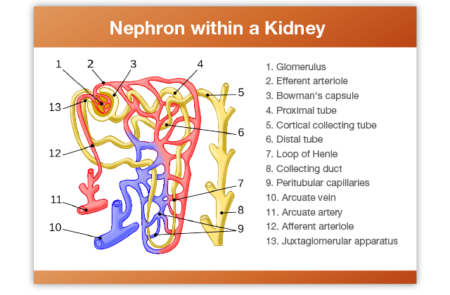 How Common is Kidney Disease?

Kidney diseases is referred to as the inability of the kidneys to remove wastes and excess water from the blood due to damage or injury. According to the National Center for Chronic Disease Prevention and Health Promotion at the CDC, 1 in 7 adults in the United States, aged 18 years and older, may have chronic kidney disease (CKD) at varying stages. And, about 96% of people with kidney damage are not aware they have CKD.

Acute Renal Failure (ARF) occurs when kidney function declines rapidly (onset is within just a few days) and the kidneys cannot perform their normal function. One of the biggest signs of ARF is decreased urine output.

There are three types of ARF, each brought on by a different cause:

Treatment for ARF is focused on targeting the underlying component. Doctors sometimes prescribe angiotensin-converting enzyme (ACE) inhibitors or recommend renal replacement therapy (RRT) depending on the extent of the kidney injury.

Chronic Kidney Disease (CKD) is a condition where there is a slow loss of kidney function over time and cannot be reversed. There are five stages to kidney disease, with each stage indicating progressively worse filtration as indicated by the Glomerular filtration rate (GFR). The final stage of CDK is called end-stage renal disease (ESRD). This is the point where the kidneys are no longer able to perform their function efficiently and patients will need dialysis or a kidney transplant.

What are the Risk Factors?

According to the American Kidney Fund, some of the main risk factors for chronic kidney disease are:

What are the Ways to Prevent Kidney Disease?

How is Kidney Disease Tested?

The leading risk factors that cause kidney disease are among the leading health risks in the United States: diabetes and hypertension. Given the prevalence of kidney disease and the common symptoms and side effects (i.e. dehydration, hypertension, etc.) that GIST patients experience, the GIST population needs to be mindful of protecting their kidneys and overall health.

There are proactive measures that can be taken to either prevent or detect kidney disease:

Computed Tomography (CT) is a standard imaging method for monitoring and evaluating treatment response in cancer patients and is typically administered with contrast media to help the radiologist see images more clearly. This may sometimes lead to what is known as Contrast-Induced Nephropathy (CIN). Contrast-Induced Nephropathy (CIN) refers to an iatrogenic acute kidney injury after administration of contrast media (CM) and can be defined as an increase in serum creatinine of at least 25% within three days after CM administration in the absence of another etiology2. The incidence is highly dependent on renal function prior to CM administration and additional risk factors, of which diabetes mellitus is the most important one. Cancer patients are more prone to have renal insufficiency due to nephrotoxic chemotherapy, but more importantly there is a high percentage of cancer patients who are elderly and predisposed to dehydration.  Stating that the increase in creatinine is solely due to the intravenous contrast in cancer patients is difficult to conclude due to the possibility of other etiologies besides contrast exposure that could play a role in the development of nephropathy. The main way to help prevent the onset of CIN is through hydration, which can decrease CM concentrations in the kidneys.

Tyrosine kinase inhibitors (TKIs) such as imatinib (Gleevec) is a class of chemotherapy medications that block the enzyme, tyrosine kinase and are used as a targeted treatment for cancers such as GIST. Imatinib is an example of one TKI that is used to treat GIST and CML. In a study by Marcolino, et.al, looked at 105 CML patients undergoing imatinib treatment and the incidence of acute renal failure and chronic kidney disease in this population. The median time on imatinb was 4.5 years and at the end of treatment, 7% of patients developed acute renal failure and 12% developed chronic kidney disease3. The study suggested that imatinib therapy in CML patients is associated with acute renal failure and that long-term treatment is related to a clinically relevant decrease in the estimated GFR that may lead to chronic kidney disease3.

In another study, Yilmaz, et.al. reviewed the records of 468 newly diagnosed CML patients who were treated with imatinib (253 patients), dasatinib (99 patients), or nilotinib (116 patients). The median duration of TKI treatment was 52 months.  Acute Kidney Injury was observed in 19 patients, (16 received imatinib, 1 received dasatanib and 2 received nilotinib)6. The median time from the start of TKI therapy to the onset of this injury was nine days6. 48 patients had a history of chronic kidney disease (CKD) at the start of TKI treatment and of which 60% had history of diabetes, hypertension and coronary artery disease6. Another 58 patients developed CKD while on therapy. Among those with CKD, Eighty-four (84%) were treated with imatinib6. Most (95%) of these cases were classified as stage III kidney disease, and 5% were stage IV6. The median time from the start of TKI therapy to onset of CKD was 12 months.6. The study found that treatment with imatinib was found to have the strongest association with the development of CKD (Multivariate analysis; Odds ratio of 8.3, 95% CI, 3.5–19.4; P < .001) as indicated by a decline in GFR6.

Both studies lead to the suggestion that renal function should be periodically monitored in patients undergoing treatment with imatinib. Yilmaz’s study stressed the importance to monitor renal function at an earlier time as most ARF cases occur during the first 3 months of therapy. Marcolino’s study further recommended avoiding concomitant administration of potential nephrotoxic agents (i.e. radiocontrast agents, aminoglycosides, NSAIDs) to avoid cumulative impairment in renal function.

Turning to our own Patient Registry with 1673 GIST patient records at the time of observation to attempt to determine the prevalence of kidney disease within the database., it was observed that there were 45 patients who had reported kidney disease or suspected kidney disease. This included self-reported symptoms of increased creatinine levels, decreased kidney function, and hydronephrosis. The average age of this group is 63 years. Prior to receiving symptom reports, their average time on imatinib treatment was 54 months and the patients have received an average of 13 radiologic scans (not specified if with contrast). The preliminary data does not prove a direct relationship between the development of kidney disease and scans or medication. This is an observation that needs further investigation.

Currently, the Registry data on kidney disease in GIST patients is limited. It is biased to the United States GIST population and is based on patient self-reported information, where either not many patients report kidney disease or are not aware that they may have it. The accompanying side effects and symptoms from both the disease, treatment and scans need to be taken into consideration in understanding the development of this disease among GIST patients.  As this topic develops, the LRG Patient Registry will continue to attempt to collect more information regarding kidney disease and keep its members informed.

A special acknowledgement is due to Kathryn Troy, former LRG Patient Registry Health Educator, who contributed to the research for this article.