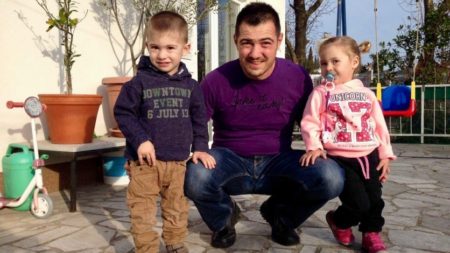 Danijel Romic with his 2 children

Danijel Romic, a 34-year old GIST patient from Crikvenica in Croatia, was faced with a challenge. Diagnosed with GIST in 2014, he did not have access to a potential life-saving treatment, Nexavar, which in Croatia is not registered for the treatment of GIST. He reached out on Facebook, including to the Life Raft Group page, seeking assistance.

Referred to Patient Registry Director, Kathrena Aljallad, he was provided with information for attaining his medication, as well as with the support to help him remain hopeful.

Within one day, he received enough medication and money

Romic was overwhelmed by the generosity he encountered. He was quoted in Dnevnik.hr online news, “Thank you very much for all those who donated the pills or paid me. It was enough for three months of therapy.”

His Facebook appeal was targeted to the whole of Croatia, but reached beyond those borders. Within one day, it was released to the media. By the evening of that day, his account was about 55 thousand kuna.

In 2014, he was diagnosed with GIST after a surgery to remove a tumor in the stomach. After surgery, however, it metastasized to the lymph nodes.

The challenge also became the long wait he endured to see an oncologist. Danijel finally started on Gleevec. Unfortunately, he progressed, and needed additional surgery, which removed nine metastases in his lymph nodes, leaving one that was not accessible by surgery.

Romic began a second-line treatment with Sunitinib, but unfortunately was allergic to the first dose immediately. Six months without a viable treatment followed, with Danijel becoming an empowered patient, paying from his own funds for mutational testing, which indicated that his GIST is SDH B wildtype.

Seeking medical help from private doctors in Vienna, he was dismayed to find that many of the suggested treatments were not available in Croatia. Regorafenib was suggested, and he was willing to start this course of treatment, but it was denied with the explanation that it was pretoxic for his tumor. He believes it was really an economic reason for denying the treatment.

Additional surgery was suggested, but as he waited, the tumor spread so much that the Croatian surgeons did not want to operate.

Finally, he transferred his case to KBC Rebro, where Nexavar was suggested.The issue then became that the medication could not be received through the hospital commission since it was not approved for GIST treatment. There was no way for him to obtain this life-saving treatment.

Help through Bayer was also not available, due to the drug not being approved for GIST treatment in Croatia.

Romic was determined to find a way. He sent out his appeal on Facebook, calling for donations of both medication and funds. The medication can be obtained in Austria, at a cost of about 3,000 euros per month.

The power of social media paid off for this GISTer.

Danijel remains optimistic. The father of two young twins, he was inspired to pursue the gift of time to give them a happy childhood.