The Werners – Finding the New Normal Living with Wildtype GIST 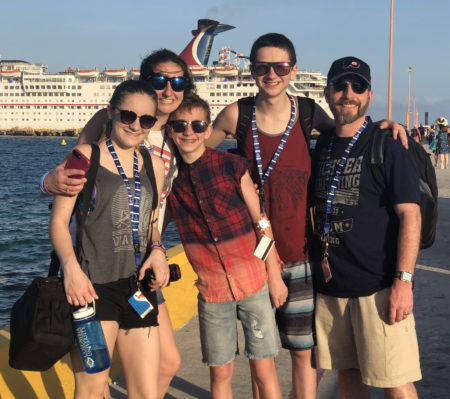 Bryce Werner was a regular middle-schooler living an average 12-year-old life in Pennsylvania when suddenly everything was thrown wildly left of normal by a GIST diagnosis.

“It started with a cough,” Bryce said. Bryce’s pediatrician tested for him for whooping cough since it was prevalent in the area at the time. That test was negative and thinking Bryce might have an infection because of a low-grade fever, antibiotics were prescribed.

With no improvement and increasing fatigue and loss of appetite, his mother, Tiffany, took him to the doctor again. This time, the doctor on-call detected the presence of the tumor.

“She could actually feel the tumor pressing against his abdomen at that point,” said his mom, “and Bryce didn’t have any pain; he didn’t feel anything at all.”

One day before his 13th birthday, Bryce had his first surgery.

Bryce is now a 15-year-old high schooler, living with Wildtype GIST, learning auto mechanics with a half-day at the local vo-tech and working on the rank of Eagle Scout. Bryce wants to be a mechanic.

The path to the new normal was not easy.

Bryce underwent two surgeries – with the first, the Werners were told to prepare for the worst because there were multiple tumors with a large one pressing on Bryce’s organs. When the surgeons went in, they saw a tumor wrapped around a blood vessel. They performed a biopsy and closed.

The prognosis was benign, but at the follow-up visit with the oncologist, that prognosis had changed to malignant. Testing revealed GIST. The Werner’s local oncologist referred them to the Dana Farber Cancer Institute in Boston, sharing frankly that he didn’t have experience with GIST and wasn’t comfortable treating Bryce.

Because of the GIST experts at Dana Farber, mutational testing was done and revealed the SDHA deficient gene mutation for which there is currently no effective drug therapy.

“When Bryce came back with the SDHA, , Dr. Janeway of Boston Children’s Hospital said it’s typically a genetic mutation. She had suggested at that point to have genetic testing done on all five of us to see if it was something that mutated in Bryce on conception or was something that was passed down,” said Tiffany.

Arianna, Bryce’s older sister, Cameron, his younger brother,Tiffany, his mother,  and his father, Chris were tested. Arianna and Chris tested positive for the SDHA gene mutation. Familial GIST is very rare with about 50-100 known cases in the world, according to cancer.net.

“They now have the diagnosis of hereditary  paraganglioma syndrome. They have a higher risk of forming paragangliomas that are associated with the SDHA gene mutation,” she continued. “With them, they do the scans typically every two years and they do the blood and urine test once a year.”

Bryce’s second surgery was extensive, removing part of the tumor, stomach, kidney, gallbladder, omentum, and a part of his small intestine, which left him with considerable pain as well as dumping syndrome which is common for this type of surgery.

“My stomach hurts and my back is almost always in pain. There are days that I am extremely exhausted and even my limbs are heavy. I haven’t had to change as much active stuff; it’s more what I eat. Food goes through me really fast,” said Bryce. He has to be careful with sugary foods but abstains from pain medications.

“Bryce doesn’t like medicine. He never has,” said Tiffany, “I feel like in life he does a lot of things he doesn’t want to do. Life has been unfortunate in that way. There are things he can control such as choosing to take pain meds. I try to let him control as much as he can.”

“Pain meds don’t really help me, and they change how I feel,” Bryce said.

Since Bryce’s surgeries, Tiffany has changed what she serves her family nutritionally.

“We’ve changed our diet considerably. Prior to this we were eating frozen food all the time, fried stuff all the time, which is how they still like to eat but I don’t put that stuff in the house. So, we’ve tried cutting out corn syrup, we’ve tried cutting out a lot of the processed foods, white sugars, things like that. I’m a realist…I’m not going to say you can’t have the soda, you can’t go out to your friend’s house and eat Cheetos and whatever. I’m just not going to supply it in our house. We still go out to eat. He knows his limits.”

Bryce has also learned the importance of advocacy along with his family. His local oncologist at the Children’s Hospital of Philadelphia works in conjunction with the GIST experts at the Dana Farber Cancer Institute.

“As parents it’s not easy to figure out the right path; then again, I’m very lucky because I do trust our doctors. If I have a question or I’m not comfortable with something they say, I’m ok saying that I feel differently or voicing my frustration or sending them an article or something like that. I’m fortunate that way, but I do know that there are a lot of people in the GIST community who don’t feel like that – that they don’t have doctors like that.”

Tiffany and Chris have kept Bryce informed and present for his own care and treatment.

“I think of day one, with Bryce sitting in that hospital room with doctors rushing in and out. Doctors pulled my husband and me into a different room with the oncologist and we were told, ‘You need to prepare for the worst because of the way things look on scans,’ and so Bryce, I think from the get-go, was uncomfortable with us leaving the room to talk about him. I think that was one of the only times we’ve ever done that. Going forward Bryce has been a big part of his care. We’ve always tried to encourage him to ask questions or if he’s not comfortable with something he needed to tell us, but it’s always been open conversation in front of him. It’s never been sugar-coated. So, in that sense he’s very much a part of his own medical plan,” said Tiffany.

After two surgeries, Bryce still has three remaining tumors. Surgery is too risky right now due to the location in the liver.

Tiffany commented on this. “They were stable for a while and recently they’ve started growing. The one is growing a little faster than the other two, but because they’re considered inoperable we’re told that they can’t do anything until they get too big and then they’ll go in.”

Monitoring with scans and blood tests is now a part of their lives indefinitely. Bryce has scans every three months to monitor the progression of his tumors. Big sister, Arianna, also has scans less frequently, unless she develops symptoms. It’s another fact to deal with emotionally.

“I think that anyone you talk to who has cancer or has had cancer will tell you that scan anxiety is a real thing that you have before every scan. Last week was Bryce’s scan and the week before that was Arianna’s. It is emotionally exhausting, and Bryce’s scans are so long that he gets his scans split up in two days,” said Tiffany.

The Werner family has found their new normal.

“It’s definitely hard to balance [dealing with GIST] and now that we’re two years out, it’s a little easier just because it’s become our everyday and it’s not something we have to think about every moment whereas for the first year, it pretty much consumed all of our thoughts and time,” said Tiffany, “It’s our normal now. And it’s not who he [Bryce] is. It’s a part of who he is.”

Bryce’s advice for other teens living with GIST as their normal, “Just keep fighting; don’t ever give up.”