A ‘Clinical Trial of One’ 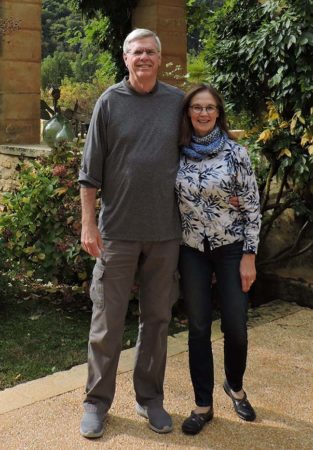 Though not officially in a clinical trial, painter Douglas Morgan found himself with a rare GIST mutation and no treatment options until an innovative oncologist and a compassionate gesture by a pharmaceutical company gave him a chance to receive a unique treatment.

Douglas Morgan knows about life-changing events. Educated as a mechanical engineer, Douglas spent twenty years successfully navigating San Francisco as a commercial real estate professional before changing course to pursue painting in his 40’s. Other events that make this time memorable for him: a new relationship with his wife of 23 years, and an incident he suspects might be the real beginning to his GISTory.

In 1995, just as his romance with his wife Bonita was blooming and his art career was still in its infancy, Douglas was experiencing small bowel bleeding. An ulcer was suspected. Upon surgery, a lemon-sized tumor, which had ruptured, was removed from his small intestine.

GIST was never mentioned because before the year 2000, GISTs were previously misclassified as other types of soft tissue sarcoma (STS), including tumors of smooth-muscle origin (most commonly leiomyosarcoma, and also leiomyoma or leiomyoblastoma). The tumor was removed, and no follow-up treatment was indicated.

Fast-forward to March 2017. Douglas had a non-symptomatic bulge that he ignored for a long time because he assumed it was a hernia. After consulting with his doctor and scheduling surgery, he chose to see Dr Kevin Hiler, a renowned surgeon for a second opinion. Dr. Hiler ordered a CT scan which revealed a 21 cm mass hanging off Douglas’ liver. Identified as a GIST, Douglas debated for almost a month whether or not to take neoadjuvant Gleevec for three months or go directly for surgery. He opted for the surgery with Dr. Carlos Corvera at UCSF, who removed a 3.2-pound GIST with negative margins, along with 30 percent of his liver.

“After waking up and hearing the surgery was a success, I was a happy guy because that was that,” he said, “and then about two and a half months later I started Gleevec for three weeks, only to discover through my oncologist, Dr. Michael Korn, that I did not have a KIT mutation (which typically defines a GIST diagnosis).

As far as adjuvant treatment goes, he was out of options for a preventative treatment protocol because the potential side effects of the available drugs made it unwise to take them.

“So, I went on my way starting with a three-month CT scan here, then a six-month CT scan there. Everything was going smoothly. We were getting ready to move from California to another state,” said Douglas.

Then, in early 2019, he began to experience intense and debilitating facial flushing. Various causes were suggested, including carcinoid syndrome. All were eliminated through extensive testing. Walks and daily meditation alleviated the worst of the flushing, but Douglas’ painting and other activities became almost impossible.

On June 10, 2019, a CT scan revealed a massive recurrence, including several tumors and numerous lesions. A biopsy revealed that the GIST had returned and it was a BRAF mutation although he did not understand what that meant.

“It was stunning and terrible news, and I was in shock,” Douglas shared. My January scan was fine, and I had always understood my particular GIST to be a slow growing slug!”

Currently, there are no drug treatments available for the BRAF mutation in GIST. During his visit with Dr. Michael Korn of UCFS, who did extensive research, Douglas was told that BRAFTOVI® and MEKTOVI® produced by Array Biopharma, which are currently used for melanoma, would be the most effective combination to combat his mutation. Douglas said that Dr. Korn remarked that ‘we were taking a ‘leap of faith.’ 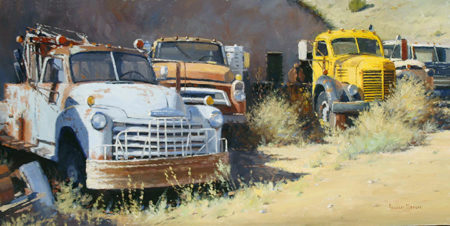 In the United States, BRAFTOVI in combination with MEKTOVI are approved for the treatment of unresectable or metastatic melanoma with a BRAFV600E or BRAFV600K mutation, as detected by an FDA-approved test. BRAFTOVI is an oral small molecule BRAF kinase inhibitor and MEKTOVI is an oral small molecule MEK inhibitor which target key enzymes in the MAPK signaling pathway (RAS-RAF-MEK-ERK). Inappropriate activation of proteins in this pathway has been shown to occur in BRAF-mutant unresectable or metastatic melanoma. (https://www.arraybiopharma.com/our-products/braftovi-mektovi).

“Bonita and I, being completely unaware, thought, ok, we’ll get these drugs in a day or two and, of course, nothing like that is possible because there are no BRAF mutation inhibitor GIST drugs approved by the FDA and Medicare Part D, only for melanoma. Gleevec is different because it’s approved for GIST patients.”

Before connecting with Array ACTS®, which is the patient assistance division of Array BioPharma, Inc, the Morgans discussed selling their home to pay for the expensive drug regimen. Fortunately, with the help and diligence of the staff of UCSF and Array ACTS® the compassionate use of the BRAFTOVI/MEKTOVI was approved though the end of 2019 under the supervision Dr. Korn.

Douglas began the treatment therapy on July 17th. A miracle occurred because on the first evening Douglas started the regimen when the flushing disappeared. For the first few days, he and Bonita were afraid to mention to each other the absence of the symptoms because it was so extraordinary.

On September 23, Douglas had his first CT scan since starting the drug therapy. The next day he was informed of the results, which were extraordinary. After reviewing the report, the oncologist told the Morgans that all the tumors had shrunk more than fifty percent and innumerable lesions are gone.

“So, the drugs are working nicely. They are doing their job. Not only do I feel normal, but I feel great!” 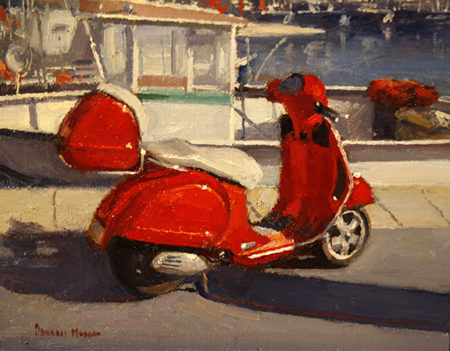 Douglas was very emotional about this and he continued, “The thing with all these drugs was that I was very afraid of the side effects. Eye problems, fatigue, rashes –  all kinds of really bad stuff because they are powerful, targeted therapies, I even wondered if I could take a lower dose for starters and work my way up.” Douglas said, “And also because these drugs had never been used on a GIST patient, I was taking the melanoma dosage. Bonita described it as ‘shock and awe.”

Douglas experienced stomach issues for a few weeks and a slight rash, but no serious side effects. He is able to eat normally and to continue his normal schedule of painting (five to six hours a day). Figuratively, he considers himself a ‘clinical trial of one’ and wanted to share his story so that doctors around the world could learn that there’s another BRAF mutation inhibitor produced by ARRAY BioPharma and that it is working.

We will be discussing the BRAF mutation in an upcoming issue of LRG Science.