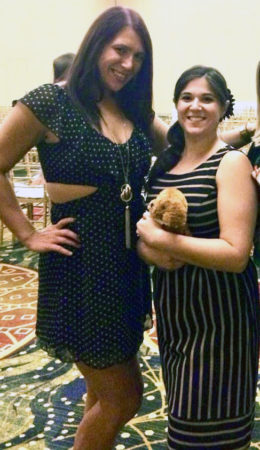 In July of 2017, Andrea Shedler attended a GIST Day of Learning (GDOL) in San Diego shortly after her best friend, Nikki Morales, was diagnosed with GIST. Like most people, Andrea had never heard of GIST so when Nikki received this diagnosis, Andrea searched the internet for information. The LRG was one of the first websites she encountered and learned that we were holding a GDOL not far from her home in southern California. While at the GDOL, she connected with GIST specialists, patients, caregivers, and the LRG staff. After meeting the LRG community, Andrea knew that this was something that she should be a part of.
Andrea understood that because GIST is so rare most people have never heard of it unless they are affected by it personally. She became determined to spread as much awareness about GIST as possible. Her ‘GIST awareness’ journey began with Nikki when they did a joint fundraiser for the LRG and a local mental health organization in honor of a close friend.

This event was successful because Nikki and Andrea came from a large community of friends which included many from their ‘Greek life’ in college. Nikki was beloved by friends and family so it was not difficult getting people to support the cause. Andrea attributes their success in spreading GIST awareness to this large network of friends and family.

In addition to engaging a large network of people, Andrea says the most successful way to fundraise is to make fundraising relatable. A few years back she participated in an event for her alumni sorority group to raise funds for children’s hospitals. The event was called The Quatrefoil Queen Pageant for women old and young. Participants made donations to vote for their favorite contestant. It was fun for all and engaged participants and attendees. Andrea wanted to do something similar to this to help raise more funds for the LRG. She decided to follow her passion.

Two years ago Andrea began doing stand-up comedy. This led her create the idea for GIST Laugh. In early 2019, Andrea hosted a GIST Laugh comedy night at Town Tavern in Washington, D.C. Several local comics entertained the crowd who then voted for their favorite comedian of the night. Even though this was the first GIST Laugh, the event sold out, raising over $4,000 for #GISTresearch!

Andrea found a unique way to host an event doing something she loves while also raising money for someone she loved. Though her dearest friend passed away later in 2019, Andrea is determined to continue to fundraise in Nikki’s memory with the hope that one day there will be a cure for GIST.

The LRG is very grateful for people like Andrea Shedler who use their creativity to raise awareness for GIST and contribute to #GISTresearch!

You can read about Andrea’s GIST Laugh here: https://liferaftgroup.org/2019/03/gist-laugh-headliner