Passion Translates to Advocacy Across the Globe

Leading the Way for GIST Patients

When facing a diagnosis of cancer, self-advocacy becomes an important survival skill for patients and caregivers. It can be a challenge learning what questions to ask, communicating assertively, and making sure that your needs are a priority in discussions with doctors. For GISTers, the challenge grows exponentially due to the rareness of the disease, even more so with the rarer mutations like SDH-deficient GIST or D824V.

Out of a need for answers a larger definition of advocacy can be born. Estelle LeCointe-Artzner’s story illustrates what an ordinary person can accomplish due to extraordinary circumstances and how she affected change for so many people with GIST. 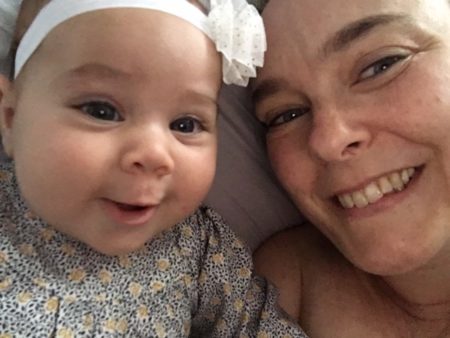 When Estelle LeCointe-Artzner was diagnosed with GIST In 2004 there was no information in French for GIST patients.  No patient organizations like the Life Raft Group existed in France and when Estelle went to the National Cancer League for answers, she found their response lacking. Describing her feelings at the time, Estelle said, “I felt it was very unfair. I tried to find some information about GIST and the way that it could be treated. When I went to the National Cancer League, the only information I was given was that it was an orphan cancer and you can imagine that I found this kind of definition very disheartening because behind that short definition was the conclusion that there is no solution, just that you will probably die.”

Estelle felt that if the National Cancer League had no definition about the disease that a patient would imagine that no doctor knew about GIST. This was untrue, but no patient could know that at that time. She knew that factual information about GIST had to be made available to patients.

“I knew from my oncologist that I was not the only patient with this disease, so this is how the story started. He had another patient who was in touch with The Life Raft Group through the New Horizons meeting which was newly organized by Novartis at that time. I was introduced to other French patients and I went to the next New Horizons meeting where I met people from Novartis and from The Life Raft Group. It was then that I decided to create a patient organization when I returned to France,” said Estelle.

Once she set her mind on creating a way for patients to have the information they needed, she started making connections.

“When I told my oncologist I was about to create a patient organization, he proposed that I meet with Professor Jean-Yves Blay, and that he might possibly be interested in the project. This was how I was introduced to the French scientific community.”

Estelle established Association Française des Patients du GIST: Ensemble contre le GIST in October 2005 which has helped hundreds of patients navigate their GIST journey by providing resources and support that were not available when she began her own journey. Estelle’s organization has spearheaded research efforts, raised funds for research, and has published articles and educational materials about GIST. As the face of GIST in France, Estelle has brought awareness to the public and to the medical community through conference presentations, panel discussions, and articles throughout the years discussing treatment adherence, research, and social issues, like having a relationship when you have cancer, among other subjects.

Estelle listed some of the current challenges for GIST patients and how her organization’s education and awareness efforts are not over.  “There is information out there about the disease thanks to our organization and they know where they can be treated and that is a tremendous change since 2004. Today’s challenge is the quality of surgery. Also, the fact that non-GIST specialists can prescribe Glivec but we know that the disease is much more complex than that. This is an issue especially for people dealing with progression because most of the time, these non-specialist doctors do not know what to do in cases of progression,” said Estelle.

Her organization is also dealing with the issue of new government regulations and the uncertain future of the continued affordability of treatment for patients. In January, the government determined that if a generic exists, then a patient must receive the generic or pay out-of-pocket for Glivec which would be very difficult for patients to afford. Estelle explained that legally, if the generics are the same price as the name brand Glivec, patients should be allowed to receive Glivec without extra cost but most of the patients ignore this.

Another issue for French patients is concerning mutational testing which is not always routinely done in GIST cases. For example, one patient diagnosed with GIST experienced two recurrences in a short period of time before her oncologist ordered mutational testing and it was discovered that she did not even have GIST, though she was being treated for the condition for years.

“It is routinely done in cases of where there are recurrences but unfortunately not always at that the time of diagnosis,” said Estelle.
At this time there is not a French patient registry run by a university or a patient advocacy organization due to regulatory issues, so there is not an accurate public count of GIST patients or a breakdown of their mutations. Through her contact with the medical community and patients, Estelle estimates there are approximately 1,000 GIST patients diagnosed with GIST each year in France.

Estelle, though currently on maternity leave, continues to strongly advocate for GIST and sarcoma patients in France and is concentrating on a new awareness campaign focused on diagnosing sarcomas and GIST since onset of first symptoms. 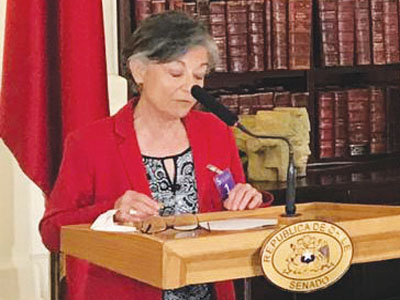 Across the globe and several years prior to Estelle’s diagnosis, LRG Global Consultant Piga Fernández found herself in similar circumstances. Piga was misdiagnosed in 1995 with leiomyosarcoma and had a second occurrence of liver metastasis in 2002. She’d endured sugeries, radiotherapy, and was experiencing a poor quality of life. A second opinion rendered a correct diagnosis: GIST.

Piga feels she was very fortunate that she was able to get Glivec through a patient program run by Novartis. Others were not so fortunate, having no access to treatment, and though her own situation was resolved, Piga felt led to help others thrive on their cancer journey. Although after starting taking Gleevec she didn’t want to know anything about cancer, after a few months she started to search the internet about this rare disease and found The Life Raft Group. After many backs and forth emails with Sara Rothschild, she finally accepted to participate in a meeting in Monterrey, México in which Alianza GIST was born, and where she decided that she needed to do something to help GIST patients and their caregivers, as a way to express gratitude for the gift she had received being able to take the treatment that had kept her alive.

Back in Chile, she helped to create a new GIST and CML patient support group. Years later, after being part of the Board of Directors, she realized that she needed another scenario to develop all the projects she had in mind, especially after being aware of all the resources that LRG had available for GIST patients. When her period as Vice-President was finished, she created Fundación GIST Chile to work in four main areas with patients and caregivers: Psychological support, education and information, advocacy and support to investigation, through publications, presentations, videos, and support groups as well as connecting patients with specialists. 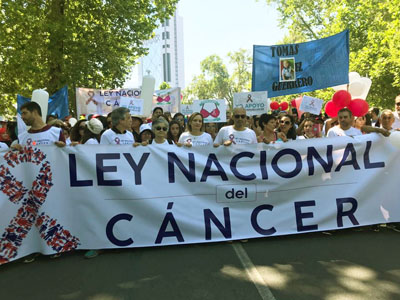 More recently, Piga joined with others to change the laws regarding healthcare for cancer patients in Chile. In a large collaborative effort, patient organizations, the medical community, healthcare stakeholders, and the Chilean Health Ministry, fueled by the relentless advocacy of people like Piga, worked together advocating to have access to the treatments many cancer patients needed through the Ricarte Soto Law, and one of the big achievements was to have imatinib and sunitinib covered by this law. Several years of advocacy work through marches, discussions, presentations, and speeches resulted in National Cancer Law being passed together with the National Cancer Plan. Piga, as member of ACHAGO (the Chilean Association of Cancer Groups), the medical community, and politicians, like Chilean Senator Carolina Goic worked together to accomplish this goal.

As our Global Consultant, she has also been instrumental in the formation of the GIST Regional Registry Latin America for patients. This move will increase the amount of data available to researchers working on new treatments and allow more data analysis to help with better survival outcomes for patients.

What’s next for Piga? Fundación GIST Chile was recently given the task of working with Dr. Marcelo Garrido to provide mutational testing for every GIST patient free of charge. This will help to ensure that patients are receiving treatments that are available and add to the database of knowledge for research and analysis. Also on the advocacy to-do list: spread awareness of GIST beyond Santiago and reach patients along this “long and skinny” country named Chile.

The path to patient advocacy is a complex and diverse one. It is not uncommon for the catalyst to be that a loved one is diagnosed with a disease, catapulting someone into the world of advocacy out of both caring and necessity. It is rare that the path would also lead to a powerful partnership with a medical professional, and the drive and determination to find ways to further research for a rare disease.

For Debra Melikian, mother of a young patient with SDH-deficient GIST, that path would first lead her to The Life Raft Group and to a GIST Day of Learning (GDOL) that would alter the course of her and her son’s life forever. 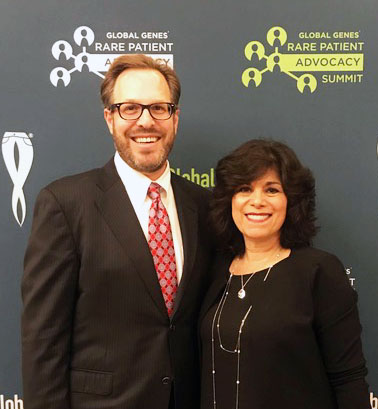 At that GDOL, she met Dr. Jason Sicklick of Moores Cancer Center at the University of California in San Diego. Sicklick is a surgeon, GIST specialist and clinical researcher. It was the beginning of a unique partnership.

“Merak was the initial inspiration to Dr. Sicklick in his SDH research. He was patient zero on temozolomide
a few years back, and his tumor cells were one of the first human SDH-deficient GIST cell lines to be cultured in a Petri dish. Using these cells, for the first time ever, Dr. Sicklick and his team have been able to test thousands of FDA approved drugs and compounds against Merak’s cell line, as well as those subsequently developed from other patients’ tumors,” said Debra.

Continuing she shared, “From there, a short list of drugs has been gleaned, for further research in his laboratory. There is progress being made in real time. We must continue to fund this all-important research at UC San Diego in memory of Merak and all the other young SDH-deficient GIST patients that have battled this disease. While I have lost my entire immediate family to SDH-deficient cancers in a mere two-plus years, I remain laser-focused as a mother on a mission to fund/find a cure for SDH-deficient GIST because I do not want any other family to go through the despair and destruction that SDH-deficient GIST brings.” 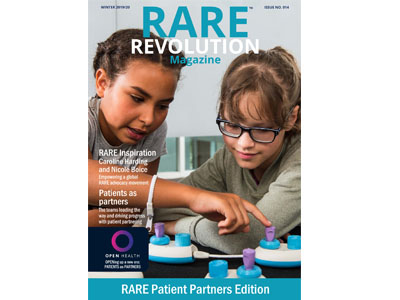 You can read more about this unique caregiver/researcher partnership in a longer article in RARE Revolution Magazine at: bit.ly/UniquePartnership