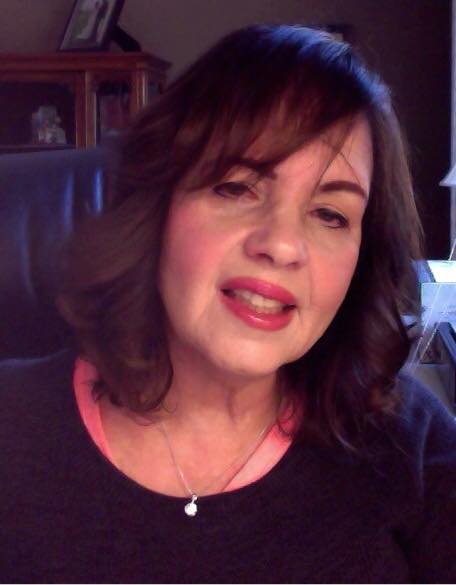 Ellen Mayer has had a very interesting journey as an artist and as a GISTer. She has lived with GIST since 2003, with no treatment except her initial surgery and has been NED* for 16 years.  A creative individual all her life, her professional career as an artist began right out of high school when the talented young woman landed a job as a fashion illustrator. After several years in fashion, Ellen worked as a graphic artist in various fields and also painted in her free time.

After raising her children, however, Ellen found herself at a part-time job she didn’t like and she realized that the commercial art field had shifted toward computer graphics, an area in which she had no experience. With the assistance of the dislocated workers program (a worker whose field has radically changed and they cannot find a job) through the unemployment office, Ellen went back to school and earned her degree in computer graphic design. This was an amazing opportunity for her!

During her final semester at college, however, Ellen began experiencing sporadic bouts of gagging and nausea with no discernible explanation. She commented on this time period, ““I thought I’m at that age, it’s so much pressure on me now. I’m not feeling well. But I didn’t even think of going to the doctor, that’s how naïve I was.  And I just kept on pushing through. It wasn’t a steady kind of sickness. I didn’t get up in the morning and say. ‘Something is wrong. It was on and off.” 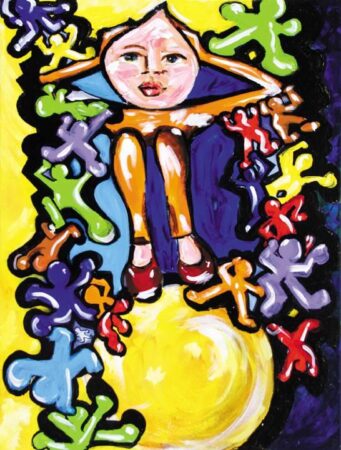 After graduating with honors, she landed a job as a computer graphic artist for a newspaper as she continued to paint and show her work while building her own graphic design business called The Original Eye. The sporadic symptoms continued for some time until finally one day, Ellen, white as a ghost with an actual bleed, was rushed to the hospital by her husband. Life changed forever that day. Twenty-four hours later, after a series of diagnostic tests, it was determined that Ellen had GIST. Fortunately, the gastroenterologist on call was familiar with GIST enough to determine the need for surgery was immediate due to internal bleeding. The Mayers believed they should go to NYC for her surgery, thinking Ellen would get better care there, but was advised to stay and have the surgery immediately. The surgery was performed with clear margins by a general surgeon. No treatment was prescribed, because at that time Gleevec was not yet even thought of for GIST.

Just to illustrate how important art was to Ellen and how cancer wasn’t going to determine how she lived her life, she shared that she participated in a large art show several weeks after the surgery that was planned well before this interruption. Her determination and upbeat personality shone though she felt the stress on her body physically. “I’m not a woe is me kind of person. I just deal with it. I came from the Bronx. The projects. A tough cookie, you know?” Ellen has been NED since her surgery but still has side effects to this day from the tumor resection and for the first decade following, she had routine scans every three months. Currently she goes for scans every two years. “I want people to understand that even though I haven’t had this GIST (recurrence) in seventeen years, it’s always in the back of my mind as soon as I don’t feel well. I want people to know you can live a productive life with this disease and not be in fear every minute about having GIST.” Ellen’s art has evolved from her pre-GIST days. 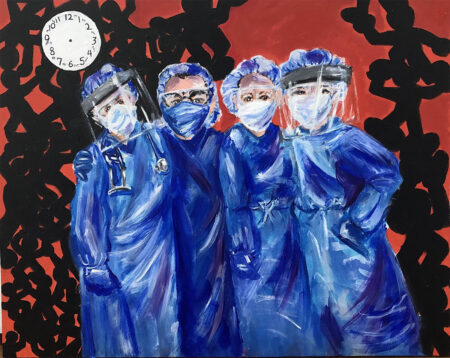 “Holding On” by Ellen Mayer

“I’m more conscious of people that do have illnesses and other issues and my subjects are a little different now too. Even this last painting I did with my daughter-in-law, who is a PA, and how that painting helped so many people and ended up being in the hospital. My career has evolved into helping people,” said Ellen. The painting, titled “Holding On”, is dedicated to the front-line heroes of the Covid crisis and is on permanently display in the Englewood Hospital Emergency Room. Ellen says that she finds her ideas for painting from what she’s going through in life. “We loved to go out a lot before Covid, always out and about, and that’s where I get a lot of my ideas. People and places inspire me. I’ll get a ‘burst’ and I’ll think about it. And then I just start painting.”

Ellen continues to work as graphic designer though her fine art paintings have been shown and sold for decades. One notable piece is titled “Balancing Act”, Ellen’s contribution to The Hope Murals Project, won a competition sponsored by Lilly Oncology for New York City. This piece speaks of Ellen’s GIST journey. “Someone [the main figure of the painting] is balancing on the earth and what’s happening is – when I was actually going through it – that this person is me. I’m trying to stay balanced on the earth and this is everyone else on the earth too. And they are holding onto each other to keep me from falling off. This is how I felt about GIST.” This incredibly personal painting was eventually reproduced as a mural in Indianapolis, Indiana. 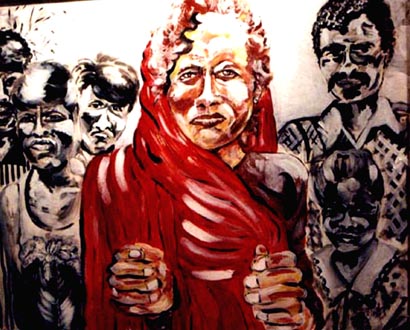 Art in one form or another, has always been, and will always be, an important part of Ellen’s life. Ellen shared, “Art completes me because I feel like if I’m not doing something creative then I feel that there’s a piece of me that’s missing. I feel uncomfortable.” Ellen is currently NED, mutation unknown, not on treatment.

During the Life Raft Group Rare 13 Campaign of 2014, Ellen said about her work, “Intense, swift strokes of strong dark colors and textures with quick motion and layering of paint are the core of my work. Inspired by the feelings of motion and emotion, my hand paints what I feel and incorporates the imbalance in shapes and color I see in life and people. My oils on canvas and acrylic on board paintings, influenced by Max Beckman’s bold black outlines and Edvard Munch’s intense emotions, translate the true depth of my feelings about contemporary issues. See more of Ellen’s work & about her GIST journey. Visit: www.mayergalleryart.com

*No Evidence of Disease