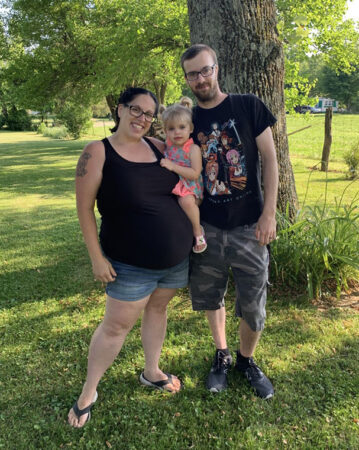 April Lopossa lives in the quiet hometown where she grew up in Indiana, with husband Tyler, between their two large families, with their own two girls and three dogs. Last November when she discovered she was pregnant with their second baby, they never could have imagined what the following year would bring in addition to a new baby. The couple received the worst possible news at one of the best times of their lives and during a pandemic.

This GIST journey began when her first child, Athena, was only five months old. April began experiencing chronic digestive issues. Housebound except for an intense work schedule, she could barely eat more than some pretzels or an apple. Then in November of 2019, April discovered she was pregnant again.

Due to her work schedule and healthcare provider issues, April had trouble securing an appointment with a new primary doctor. The problem steadily worsened. At her pre-natal visits, her medical team said that hormones can cause a lot of issues and suggested more fiber for the diarrhea. In January, when she was finally able to get blood tests, they showed inflammation but there was nothing to be done about that while she was pregnant.

“I was told that when you go for your anatomy scan, have them check your gallbladder and if that’s fine we’ll do a colonoscopy after you have the baby and see what that shows,” said April.

In early March of 2020, April woke up with severe pain. She went to work anyway, but ended up having to leave and call her primary who told her to call the obstetrician right away. The obstetrician saw her and sent her to the emergency room. After twelve hours, April learned that her gallbladder had been giving her all this trouble. An ultrasound confirmed all was good otherwise, but the surgeon said the gallbladder had to be out before her third trimester otherwise it would be very difficult to remove. The surgery couldn’t be performed right away, however, because the Covid pandemic had just hit the United States and all non-essential services were curtailed.

On St. Patrick’s Day during her anatomy scan, April learned she was having a girl and a mass was discovered in her abdomen. April recalls that moment, which she lived through alone (her husband wasn’t allowed to be present due to the Covid rules).

“They were pressing on it and I remember them saying, ‘Does it hurt, do you feel it?’ I couldn’t feel it. I didn’t know there was anything there. They sent me for an MRI. I was about 22 weeks pregnant by this time.” “I got a call from my doctor about the MRI results and he said it was a desmoid cyst, just a clump of cells. He said they’d just take it out when I had the baby. He also let me know that this wasn’t his specialty, but that the surgeon would know more. I appreciated the honesty. So, I did my own research and learned that desmoid tumors are actually really rare and they say that if you have surgery on them that they can grow back even more aggressively, so it’s best to not do surgery. I learned this all on Instagram, searching hashtags, and found a story about a woman who had a desmoid tumor and her doctor. I connected with her,” April shared.

April met virtually with that doctor – Dr. Daniel Rushing, who happens to be the only GIST Specialist in Indiana. “He asked me a lot of questions. I told him I was having my gallbladder removed that month. He gave me a list of things that mass could be, such as Gardiner Syndrome or GIST, and he recommended doing a biopsy before the tumor was removed,” she said. In April 2020, April had an ultrasound biopsy, and two days later, at 26 weeks, she had her gallbladder removed. After the gallbladder surgery was when she actually got to see a picture of her tumor. Her surgical team praised her for calling Dr. Rushing – otherwise they would have removed the tumor and it would have just been noted as a random benign tumor and it might not have been identified as a GIST thus postponing treatment.

Once the biopsy was performed and the mutation revealed as exon 11, the dilemma for Dr. Rushing and the Lopossas was whether or not to give April Gleevec before the baby was delivered in order to shrink the tumor which had a mitotic rate of 6.

April was the sixth person diagnosed in her town with GIST, and though this is an interesting fact, there appears to be no correlation between the causes and cases known at this time. Anecdotally, 30 years ago, toxic waste from dry cleaning was dumped regularly into nearby water supplies and there do appear to be an unusual number of cancers diagnosed in the area, but again, no direct correlation has yet to be proven. April says that many in her family suffer from stomach issues so they remain suspicious. To date, there is no known cause for GIST, so the contamination is an unlikely suspect at this time.

By her third trimester her OB determined April was past the risk of birth defects, so Dr. Rushing, as her oncologist, needed to decide whether the baby could tolerate the effects of Gleevec. April did not want to risk anything with this baby. Delivering by c-section and extracting the tumor at the same time was considered risky due to the necessity of two cuts, requiring a much harder recovery and higher risk of infection.

Dr. Rushing asked the Lopossas if he could submit April’s case to the Life Raft Group’s Virtual Tumor Board so that he could confer with a group of worldwide GIST experts who would weigh in on this situation. April and Tyler carefully considered the options and choose a c-section at 36 weeks with surgery to remove the tumor later with no Gleevec pre-op. At 36 weeks and four days, Amelia Lopossa was delivered weighing in at 6 pounds 15 ounces. Five weeks later, April had to leave her toddler and newborn with family for five days for the surgery. The surgeons removed a 7 cm tumor and only bit of intestine. The surgeon reported clear margins and that it was good they got the tumor out when they did because it was barely holding on. The recovery from the surgery was tough with a toddler and a newborn but April’s mom and sister helped her through it. Tyler wasn’t able to take a paternity leave. 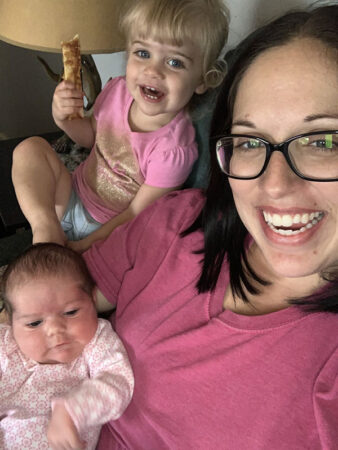 “Being pregnant made me even more worried about it all,” April said, in reference to the discovery of the tumor. “I want so concerned about her (Amelia, the unborn child). I did not expect to have her. She is my little lifesaver. My miracle baby. I did not expect any of this! My high-risk OB joked saying that I had a greater chance of winning the lottery than I did of any of this happening to me. I say Amelia saved my life, because without her, how would they have found my tumor?”

Imatinib is her current treatment and April has had two clear scans since her surgery. Her next scan is in January. April said their life is beginning to become ‘normal’ again. “I didn’t expect to be a full-time mom, but with the surgeries, the medicines, and Covid, and juggling the kids, it is better this way. It’s our new normal,” said April. Her side effects have lessened with some adjustments and she’s been able to add some exercise to her routine. Tyler was able to switch to the weekend shift so that he’s home more during the week to spend time with his young family.

April jokes about her positive, cheery attitude, “It’s the meds. I didn’t have time to be sad because I had a toddler. She moves non-stop. I just didn’t have time to be down. If I had a time to cry about it, it would have been in the shower because that’s the only time I was alone.” April also had to deal with the doctor’s visits, monthly MRIs, five ultrasounds, gallbladder surgery and the tumor surgery on her own because of the Covid rules. Tyler was allowed to be there for the biopsy and the Amelia’s birth. The couple relied heavily on help from their family to make it through this obstacle course of events.

“I also have a great mentor, Kay (Kay Stolzer, LRG GIST Mentor), and that helped, having her to talk to as well as the LRG GIST Support Group. It helped that I had the baby (Amelia) to focus on instead of myself, so I didn’t really focus on me until after she was born.”

Are you interested in connecting with a GIST Mentor or attending a virtual GIST Support Group?
Email: dnieves@liferaftgroup.org