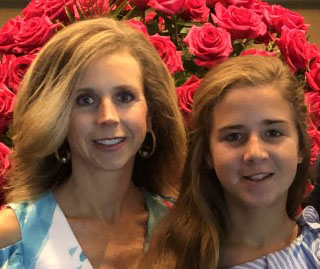 April’s GISTory is a quite different from the long-term stories we’ve shared so far – those of Dina Wiley, Chuck Korte, and John Abrams (see Member Stories on our website). The average GIST patient is in their 50s or older when diagnosed.  The rare exception is usually a pediatric SDH-deficient GIST, but April’s case is a case of ‘the rarest of the rare’ in that she was only 20 years old when she first encountered GIST and was not SDH-deficient.

Though she can say she has been a GIST survivor since she was 20, April wasn’t officially diagnosed with GIST until two years later. To understand the ‘official’ designation here, April said what happened to her in 1998 when she suffered extreme stomach pain that her doctors believed was an ileus (intestinal obstruction) or appendicitis. During the subsequent emergency surgery, doctors removed her appendix and what was believed to be a Meckel’s diverticulum.* She had no health issues again until 2000.

At 22, she had experienced vague stomach discomfort and had even gone to the emergency room once due to the pain, but after x-rays and blood tests, she was presumed to be suffering from constipation. Her gynecologist noticed a potential ovarian cyst or tumor during a routine ultrasound late in 2000. After a CT confirmed there was indeed a mass, assumed to be a benign ovarian cyst, April had surgery. The surgery, however, revealed a large cancerous tumor – 32 cm, which had metastasized throughout her abdomen.

Her treatment team took another look at the tissue from the 1998 surgery and it was confirmed to be GIST. April is thankful for the prior misdiagnosis.  April shared, “If I had been diagnosed with cancer in 1998…I was in the middle of college, about to start my junior year. I would have most likely started chemotherapy treatment (although it was not notably effective in GIST, but there were no other treatment options in 1998) and deal with its side effects. So, I think it’s just part of God’s plan that it happened the way it did. I am thankful that when I was diagnosed with GIST in December 2000, that there was a new targeted drug that could possibly work. And it did.”

At the time of the cancer diagnosis, April was in college working toward a double major in exercise science and dietetics & nutrition and was newly married to Heath, her husband of 20 years. Her pathology report revealed GIST. She said that after her diagnosis, she thought of her grandmother who had recently passed away from cancer. 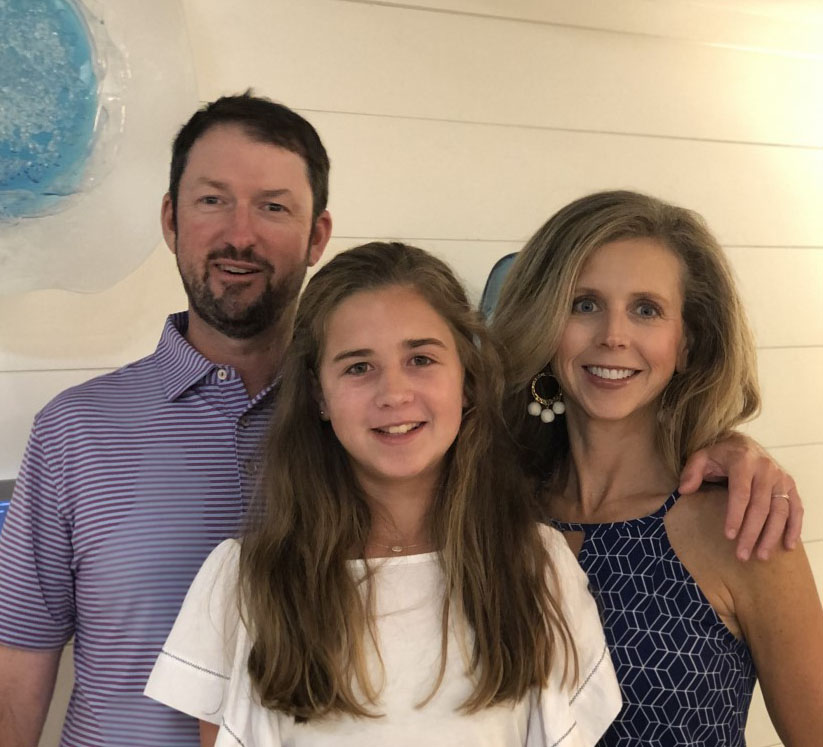 “My grandmother had died in April of 2000, from a sarcoma and had gone through chemo. I drove her to several of her appointments. My GIST diagnosis was hard at first. I remember my grandmother said she never asked ‘Why me? Why did I get cancer?’ That came to my mind when I was diagnosed. You just
have to move forward and start fighting GIST.”

April’s local oncologist, Dr. Dan Bradford, has been a part of her treatment team since her official diagnosis in 2000.  Additionally, with Dr. Bradford’s recommendation, she has been followed by GIST expert Dr. Suzanne George and GIST surgeon Dr. Chandrajit Raut at Dana Farber Cancer Institute
since 2011. Dr. Bradford and his team knew of the imatinib trials for GIST patients at MD Anderson and April applied to participate, but because there was no evidence of disease after her surgery, she was unable to join the trial. The doctors developed a protocol and applied for compassionate use of the drug and she began imatinib in March of 2001. Gleevec was approved for GIST in May of 2001 and April stayed on that treatment until December of 2013 with a few tweaks to dosage and another surgery in 2011 and in 2013. During this time, April finished her undergraduate degrees and her masters in Nutrition,
in addition to working in her field and having a baby.

Daughter Mary Catherine was the focus of a very large tweak in treatment. In the early days of Gleevec, it was a common thought that perhaps a GIST patient who was on Gleevec for five years with no recurrence could stop treatment. In 2006, April and Heath began researching what was and was not recommended for GIST patients on Gleevec and pregnancy. They talked with Dr. Bradford and he reached out to other GIST experts. April herself emailed some experts, and followed a CML patient on Gleevec and the story of her pregnancy.

“Eventually, my doctors did say I could stop it [Gleevec] but I needed to know about the risks involved and the possibility that the tumors could come back. As long as I was informed, then they were willing to give me some time to try to start a family. They wanted to do a scan after a three-month period with no treatment to see if I was a ‘rapid relapser’,” said April.

When April was first diagnosed with GlST and couldn’t get on the trial and receive Gleevec, the doctors were going to put in a port so that she could receive chemo. At that point, April was advised to consider fertility preservation because the chemo would affect her chances of getting pregnant later.

“I was going to do fertility preservation, but it was just all too much for me at that time. So, we didn’t do it. It was all so overwhelming. We went to the first appointment (with the fertility specialist) but we didn’t pursue it,” April shared.

The scan at three months showed no evidence of disease and she and her husband had the green light to try to get pregnant. Several more scans were clear before April became pregnant in December of 2006. Mary Catherine was born in August, a healthy 9.1-pound baby following a healthy, uneventful pregnancy. Thankfully they were able to avoid a c-section, which is an important consideration for future surgeries.

The plan after Mary Catherine was delivered was to have a scan as soon as possible but before she could even schedule the scan, April noticed tenderness in her abdomen. A scan revealed a recurrence that was 7cm tumor along with several other smaller metastases.  April then resumed Gleevec and her scans, six weeks later, were clear. April and her medical team assumed that she would probably be on Gleevec for life. Mary Catherine is now a healthy, active thirteen-year-old junior high student.

April’s treatment story doesn’t stop at Gleevec. In 2013, several months after another surgery, there was progression and in December of that year she began Sutent. The side effects from this drug were much worse than Gleevec and though her disease was stable for a time, there was no real shrinkage. Gradually her disease showed slow progression and in 2015, she was switched to Stivarga. 2016 and 2017 brought more surgery and due to slow wound healing and tumor growth not seen on scans but discovered in surgery, her doctors concluded that Stivarga was not working effectively. April joined the BLU-285 (avapritinib) trial in January 2018, but by June between cognitive side effects and tumor growth, she was removed from that trial. After a washout period, April was accepted to the DCC-2618 (ripretinib) trial and remains on that trial currently. Patients who undergo so many surgeries and so many treatment lines experience a variety of consequences from the surgeries and side effects from the various drugs. April is thriving and surviving as long-term GISTer. She credits several things for sustaining her throughout the past two decades. Her faith, family, close friends and her husband, above all.

“This 20-year journey has shown me that God’s timing and plans are always perfect even if I don’t understand them at the time. He has provided new drugs each time I needed them, guided me through nine surgeries and placed family and friends in my life to help support me along the way. I feel pretty good even though I have dealt with fatigue on all of the drugs. I have to keep a positive outlook on things and I can’t let myself get down about my GIST diagnosis or the side effects of treatments,” April said.

She continued about husband Heath specifically, “He’s always the one that’s there, if things have progressed or if I am going to have to switch drugs; he keeps me from going down the ‘what if’ and ‘why’ paths. He’s says this is going to work and you’ll tolerate it well. You’re strong, you’ll do great.”

The LRG recently conducted a survey of long-term survivors where we asked them a number of questions to help understand what they felt contributed to their long-term survival, as well as other topics.

What makes a long-term survivor?

“I think that staying in good overall health, eating healthy, and exercise have all helped me. I try to stay on top of what’s going on in the GIST world as far as new treatments, trials and research, so that I can ask appropriate questions when I go to my doctor appointments.”

April’s advice to other GISTers just beginning this journey:

“Getting to a GIST Specialist and finding a doctor that you have a good rapport with – they take time with you, they answer your questions thoroughly, you can get in touch with them when you need to. I recommend getting a second opinion if you need to, if there’s ever a question or doubt about something. And the same thing with the insurance. They can deny certain procedures, tests, drugs, or doctors. Don’t take a no, but make an appeal to the insurance company, by calling or writing a letter. One of my insurance companies wasn’t going to approve my surgery out of state with a GIST Specialist, so I found the NCCN guidelines for GIST and documented where it said if you had advanced GIST you need to see a GIST surgeon, a specialist, and I sent that in and finally they approved it. Be your own advocate.”

Has the LRG been a help and support along the way?

In the early days of her diagnosis, April’s mom, Cathy, started doing research and found the GIST Listserv (a private email community for those who were facing a new diagnosis of GIST vs LMS) which was very young (now replaced by GISTChat) and had information about the imatinib trial. April also commented, “Definitely. I always read the newsletters. Several years ago, I read about the trials on the website and I even talked to an LRG staff member about information they had on a specific trial. I also enjoy reading the personal stories that are published. It’s been a huge help to me.  I’m grateful for the educational resources of the Life Raft Group and how they have helped me make treatment decisions along the way.”

Read other articles from February 2021 Newsletter