Thriving & Challenging Yourself While Living with GIST, Stijn, Part 2

Two GISTers Share How They Are Reaching Their Goals

GIST patients face many obstacles and challenges to get to a place where they’d say they were thriving. Physical challenges from surgeries, pain and side effects can severely change the lifestyle and activities they enjoyed before GIST. Two GISTers, Elsye and Stijn, one from the U.S. and one from Belgium, had to face those changes and both decided they wouldn’t accept an altered version of life and strove for something more. 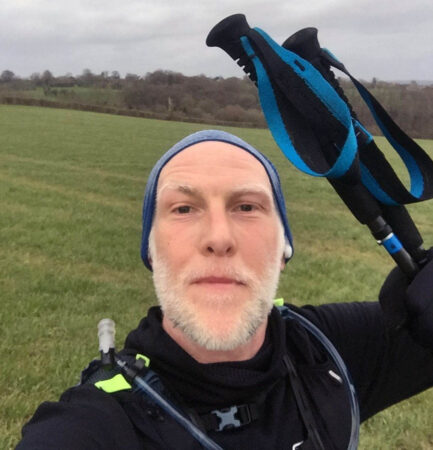 Stijn’s story is somewhat similar to Elsye’s except for the fact that he has been a GISTer for much longer. He thought of himself as fairly active pre-GIST, playing volleyball and running short races (10Ks) but after his GIST diagnosis, surgery, and commencement of treatment, he found that fatigue became a constant and debilitating side effect.

This GIST journey began in 2016. Life was going well – he was working in Human Resources for a non-profit organization dealing with youth, he was active, and he had no complaints health-wise, except for occasional stomach aches which he chalked up to stress. Just as Stijn was transitioning from one job to a new one working with at-risk youth late that summer, he found himself suddenly in a lot of pain. At a regional hospital near home, doctors found the source of the pain, internal bleeding from an unknown source. That source later became an abnormal lump of cells. At that point, he was told it would most likely not be harmful. He was sent to the University Hospital in Antwerp for the surgery in October. At that point, all Stijn knew was that he had a very rare anomaly and he just wanted this ‘mysterious’ thing removed.

The plan was to perform the surgery laparoscopically but that proved too difficult due to excessive bleeding and the amount of metastasis. Twelve days after the surgery the doctors came up with the diagnosis of GIST, which turned out to be exon 18 WT and his oncologist started him on Sutent in December of 2016. 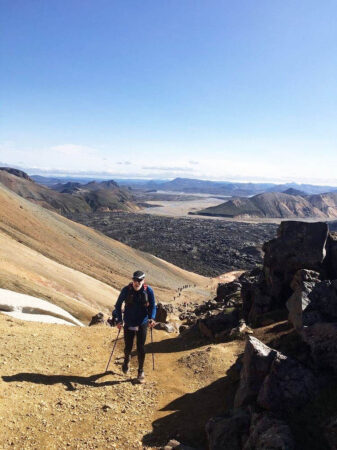 “I didn’t research deep into GIST at first, I trusted my doctor’s opinion and I got a second opinion as well (a GIST specialist, Dr. Patrick Schöffski, UZ Leuven). He spoke to me for a long time on a very busy day in the clinic. I knew it was something rare, and the wildtype designation was even rarer. He gave me some numbers and said that the medication will make you sick but you’ll get used to it or we’ll have to change it up. Side effects were hell at first. Many side effects. Hands, feet, stomach, mouth,” he said Stijn. Emotionally, Stijn said he really only had one very dark day.

“Dealing with it was hard, it was a harsh blow, but I landed on my feet, surrounded by good people. I had learned from other issues in life that you have to look for the ‘gain’ so I tried to look for the profits in this situation. I looked for positive things – I wasn’t going to have to do chemo or radiation therapy. I wasn’t dying immediately. I thought, ok, the profits are that life is fragile and that it could end at any time so I started living my life really vigorously.”

After healing from his surgery, Stijn went back to volleyball and his regular schedule of activities but said that this was not a complete success. “After my first match, I remember laying for 15 minutes on my back on the floor completely empty. And even during the game, someone called out sick so I played the whole game feeling pretty empty. Fatigue was a big issue. I had to sleep after work. But I still stayed

He had scans every three months but talked with his oncologist every six weeks to discuss how he was doing on the medication. Due to the extreme fatigue, they tried lowering the dosage of medication, but fatigue was still an issue and rest wasn’t helping.

“I happened to see a lot of information on cancer patients and survivors writing about sports and being active as a way to counteract the fatigue caused by the medicine. And I started to create goals for myself. I had made a bucket list which I completed pretty fast because I was so conservative. I was not being very hopeful so I chose things that wouldn’t take me a long time. I was thinking pretty short-term. Now I’m planning a bit more forward and I began doing lots and lots of things – travels, challenges.”

One of those activities include a race called Spartacus held in Belgium which was a combination of obstacles and running. Stijn said that it seemed to him to be something impossible to do, even before he got sick. Similar to Elsye’s mindset, Stijn needed to prove that he could persevere mentally and physically as he once had.

“I winged the training regimen on this one. I just needed to prove that I could do it. And I did it. I was completely drained and couldn’t walk for three days afterward. Probably not the way to go but I proved to myself that I was capable of doing something that a lot of other people weren’t capable of doing. Back then I wasn’t training properly so I didn’t see any increase in energy but it broke down some mental barriers for me. I am capable of doing physical challenges and I can rise above myself and I am not broken” Stijn continued, “And then afterward, I did some smaller runs and I did races on really bad days (as there are good days and bad days) I suffered a lot running on those bad days, but I always finish. One race I was running was with friends ten years younger and healthy and they were pulling me along. It was really hard. And then I had the idea that I wanted to run hills and do trail running just to challenge myself.”

Stijn wanted to keep challenging himself, and the fatigue was still an issue, so he decided to do longer runs.

“I wanted to do this longer (25 km) race in Ardennes (an area in Belgium with vast forests of broadleaf and fir, hills, and fast-flowing rivers) which is really hilly and I talked to my oncologist. The doctor said it might not be the best idea but I’ll send you to the sports department of the hospital. So, I went to the sports department of the university hospital and they tested my heart, my body. I did the running test on a treadmill (stress test), blood tests, and such. They told me I was in really bad condition; your shape is not good. In order to do the race, I wanted to do, they said ‘You have to train properly, based on heart rate, as if you’re going to be running a marathon on the date that you’re doing that race.’ And this was the start of a really good thing because I started training by heart rate, throwing away everything I knew before. And from that moment on I began to beat the fatigue. I started running by heart rate and it meant the first two or three months I had to walk a lot more than I ran -because my heart rate was too high when I was running, I had to stop and walk, slow down and then run again. It was frustrating. Sutent makes my heart rate faster, so this was frustrating at first.”

He needed to build up his endurance and employ the concept of ‘flow.’

“I’m really into the philosophy of ‘flow’. If you are competent or able to do things that you challenge yourself to see just how competent and capable you are. And if the challenge is big enough and you’re up to the task, you enter a state of flow and you really move forward.” Stijn continued to challenge himself, battling the fatigue successfully and building up his endurance. 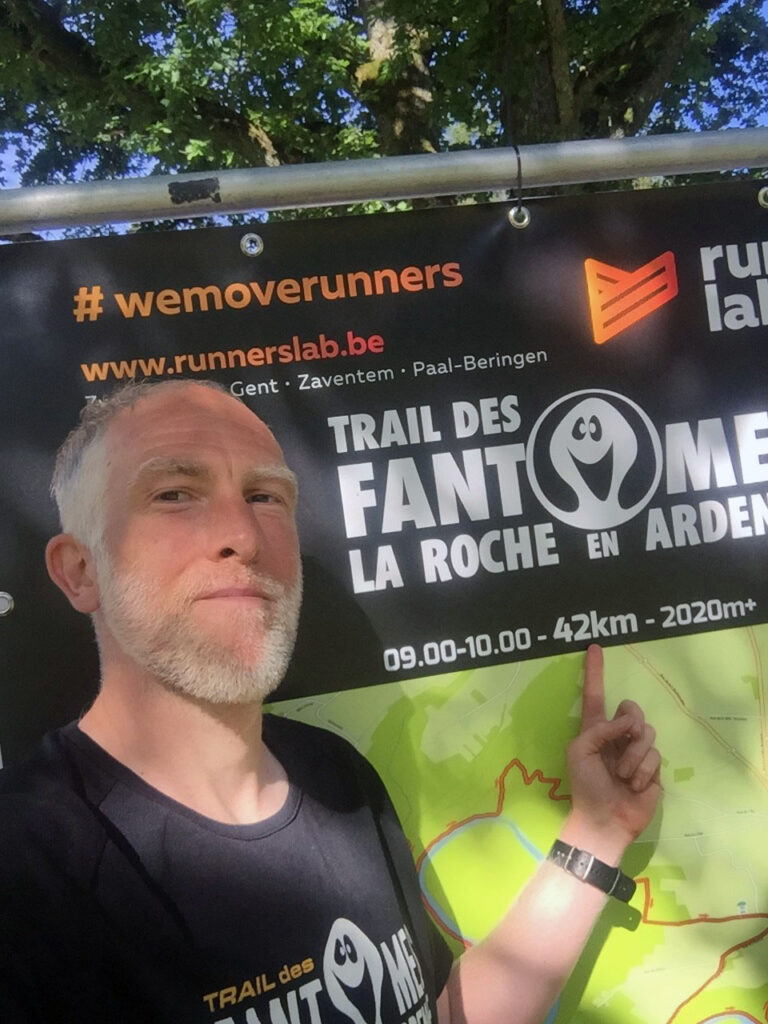 Stijn entered the Icelandic Laugavegur Ultra Marathon Race 55K. He had hiked this trail in the past in four days sleeping 12 hours in between the day hikes, so he knew the terrain.

He said this about the race: “I wasn’t capable of doing that at the moment I decided, and I had to build up to that. I had to stay in the state of flow – I’m going to go there and challenge my level of competence. I had a trainer who challenged me and I became more fit and skilled. If I’d kept running the same distances, I’d get bored. The state of flow and continually challenging myself is a good mindset.”

Stijn completed the race in 7 hours and 40 minutes. He worried that he would need the maximum amount of time which is nine hours, but he trained so well and did better than he anticipated. The only stops were for toilets along the way. He consumed an energy gel pack every half hour and concentrated on carbs and sugar for energy, avoiding fiber since that fills you up. He had some issues along the way and wasn’t feeling 100% but he endured.

“Before I didn’t have to think about anything, I just did it. Now I had to start considering the ‘details’ more and I have gained so much and gone further in my physical fitness than I ever thought I could. I used to think that marathon runners were so stupid – I didn’t understand why you would want to run that long and far. The biggest race I had done was a 10 mile in Antwerp and that felt like a bit too far but I did it. And in dealing with GIST, I had this mindset change and wanted a bigger challenge for myself to encourage others and inspire others.”

Every GISTer has challenges due to surgeries, and medications, and their side effects. No one is suggesting that every patient become a super athlete. These stories are meant to inspire you to work towards the best life you can live as you thrive with GIST whatever that looks like. If you are having issues with fatigue, please consult your oncologist for ways to overcome this. In our experience in talking with patients and physicians, treatments, anemia, low B12, and lack of activity can contribute to fatigue. Please consult with your physician before making any changes in your medicines, supplements, or exercise routine. You are also welcome to join the LRG community and our GIST Chat forum where GISTers privately discuss their GIST journeys and how they work to thrive.