Approximately 80% of GIST patients have only a single tumor at diagnosis (this is called a primary tumor). Surgery to remove the primary tumor is the gold standard for treatment in GIST and it offers the best chance for a cure. Surgery is the typical initial treatment after a patient is diagnosed, especially if the patient has only one tumor that can be removed fairly easily (primary surgery).

All GISTs larger than 2 cm should be resected if possible. Some GISTs have a low risk of recurrence after surgery. These are typically smaller GISTs with a low mitotic rate (see Risk of Recurrence). The management of non-rectal GISTs smaller than 2 cm with a low mitotic rate (less than 5 per 50 HPF) remains somewhat controversial. Some doctors recommend monitoring these low risk GISTs and some may recommend removal. Small rectal GISTs have a significant chance of having a high mitotic rate. Rectal GISTs smaller than 2 cm but having a mitotic rate above 5 per 50 HPF have a higher chance of recurrence and are good candidates for surgery.

Surgery for primary tumors located in some locations can be more difficult or result in more complications for the patient. In particular, tumors located in the esophagus, duodenum (sometimes requires removal of the pancreas) and rectum may result in more complications or lifestyle limitations. In these situations, a multidisciplinary review is critical. In some cases, complications or the scope of the surgery can be decreased with the use of Gleevec prior to surgery (neoadjuvant Gleevec).

What’s the role of surgery in the management of GIST?

GIST patients have benefited from multiple FDA-approved medications for their disease. However, medication is not the sole tool for disease management – surgery is important as well. Most patients will undergo surgery at some point during their treatment. Most commonly it is used as the initial treatment after a confirmed diagnosis of GIST, especially if the patient has only one tumor that can be removed fairly easily (primary surgery). When there’s a single tumor but surgery appears to be more difficult, the patient may be given imatinib before surgery to try to shrink the tumor and make surgery less complicated. When this happens, the imatinib given prior to surgery is classified as neoadjuvant therapy.

In some cases, a patient presents with multiple tumors at different locations in the body upon diagnosis. In other cases, a primary tumor is removed, but a patient eventually develops additional tumors throughout the body. In both cases, the patient is said to have metastatic disease. While medication is undoubtedly important in treating metastatic GIST, surgery can be important as well. 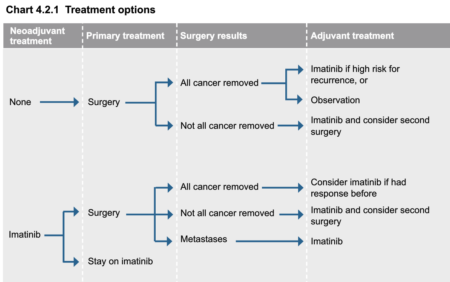 Some gastrointestinal stromal tumors (GIST) may present as metastatic at the time of diagnosis. The most common site for metastases are the liver and/or peritoneum. With widespread progression (multi-organ involvement), surgery may not achieve removal of all visible tumors. In this case, the NCCN recommends treatment with imatinib as the standard of care to help prevent further recurrences. If surgery for metastatic GIST becomes viable as determined by healthcare team, resection is advisable to lessen tumor bulk/volume, although this is not potentially curative as some GIST cells may remain post-surgery.

A study by Park, et.al, (2014), demonstrated a likely benefit of surgical resection of residual lesions after disease control with imatinib. The study looked back at 134 advanced GIST patients treated with imatinib or imatinib + surgery. The imatinib group (92 patients) had a median progression-free survival (PFS) of 42.8 months versus 87.7 months in the imatinib + surgery group (p=0.001). Even more importantly, the overall survival times were longer in those receiving both imatinib and surgery (OS not reached) versus imatinib alone (88.8 months).

In the absence of big, randomized (not plausible for this type of study) clinical data, one of the most solid conclusions seems to be that surgery is of little benefit for patients with widespread progression of metastatic disease. Surgery for limited progression (one or two tumors) appears to have some benefit, and surgery for metastatic GISTs which have achieved stability with tyrosine kinase inhibitors (imatinib, sunitinib, etc.) is an individualized case that needs a multi-disciplinary collaboration with recognized GIST experts.

The decision on whether to have surgery for metastatic disease after responding to Gleevec (imatinib) is a complex decision.

It involves many factors such as:

Does having surgery mean I won’t have recurrence and don’t need adjuvant Gleevec?

In a few words, it’s not that simple. Recurrence can still occur and Gleevec (imatinib) is most likely needed depending on your mutation and risk of recurrence category. Read more about adjuvant Gleevec and mutational testing. Read more hear about Gleevec after surgery in our Adjuvant treatment for GIST section.

I’ve had surgery. Now what?

Surgery is an important tool in helping manage GIST, but it also can result in changes in the body that need adjustments. Particularly, as in many cases you’re dealing with the gastrointestinal tract, nutrition is one area that is often impacted significantly. Below is some information that deals specifically with nutritional issues after gastrointestinal surgery:

The removal of the stomach or other parts of the GI tract can require lifestyle changes, especially when it comes to diet. Managing and understanding how to properly nourish the body is important. Patients who undergo a gastrectomy may have to eat smaller and more frequent meals. They may have more difficulty absorbing some nutrients and may suffer from “dumping syndrome”, which is caused when food moves too rapidly into the small intestines. Almost everyone who has undergone surgery will form a type of scar tissue called adhesions. These adhesions can cause pain and in some cases bowel obstruction. Not everyone will develop these problems and if they do occur, they may not happen for many years.

Some common concerns are:

For more information on managing other side effects of GIST: