Skip to content
Home/Jerry Call – The Man Behind The Scenes

Jerry Call – The Man Behind The Scenes

Jerry Call, the man behind the scenes. You sit alone in a dreary doctor’s office; evidence of his medical expertise and importance adorn the walls. Maybe you sit there with a loved one, equally as scared and unprepared as you. The doctor hands you a verdict that says your time is up. Well now what do you do?

At times like this, people feel a range of emotions: defeat, clarity, redemption, remorse, to name but a few. In the GIST community we have also heard and experienced stories of triumph and miracles, rising from rock bottom and greeting the world anew. A world where David can and does beat Goliath.

Ten years ago, Jerry Call was introduced to this world as he sat next to his wife of 15 years, Stephanie, and learned of her leimomyosarcoma (LMS) diagnosis. Amidst the shock and disbelief, her oncologist’s voice rang out, “This is probably going to take you away from us.” After two rounds of a harsh chemotherapy called MAID, her doctor announced that it was not working and there were no further options for Stephanie. Having never done anything halfway in his life, Jerry refused to accept this as the end. Because one doctor said there was nothing left to be done, should they just quit? He immediately went home and came up with a plan to save Stephanie’s life.

“I was always a very independent person. When I was diagnosed, I just lost it,” recalls Stephanie, “We knew the only way to get control of 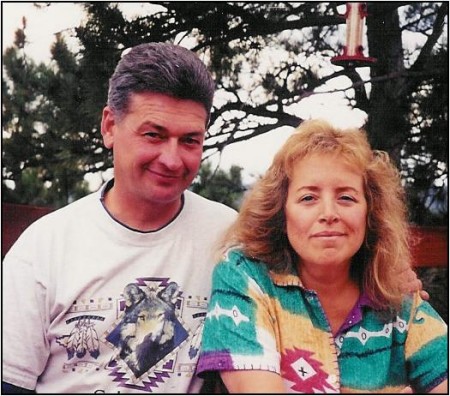 the situation was to get online and do research. So Jerry self taught himself. He actually had to tell numerous oncologists what was out there for treatment and they were not ready for that.”

At home, Jerry outlined a plan of attack. First they would arrange a consultation with Dr. George Demetri of Dana Farber Cancer Institute in Boston. He also set up an appointment with a liver surgeon at the University of Colorado and began investigations into an experimental treatment available only in Ireland.

“All of a sudden we went from no options— no hope—to having three different paths that we were going to pursue,” recalls Jerry. A former marine, Jerry started issuing orders; his mother would arrange travel and his brother researched passport requirements, in case he would need to travel to Ireland.

In Dr. George Demetri, the Calls found a compassionate expert who was the most knowledgeable person they had ever met. He suspected Stephanie actually had GIST and had been misdiagnosed (this was later confirmed by a ckit test), but there were still no effective treatments for GIST. As Demetri read off options, Jerry could tell that he had little faith in them. After another strikeout with the liver surgeon, Jerry found himself on a plane to Ireland with 2,700 dollars for a three month supply of an experimental drug.

The Call’s first year with GIST was a rough one. After the MAID chemo, Stephanie began a rollercoaster of treatment beginning with the Irish drug; she then had a painful biopsy test, followed by seven rounds of an additional chemo called Taxotere, and then began taking Interferon which caused an allergic reaction.

Finally, after reading thousands of emails he came across one very important piece of information: a new trial for a drug called STI-571 (Gleevec).

The Gleevec trial proved to be a turning point for Stephanie and truthfully, for Jerry as well. While Stephanie experienced benefit from Gleevec for more than four years, Jerry was introduced to more and more GIST patients, dozens of “Stephanies”, who needed guidance.

When the LRG first formed, Jerry began working for the organization on a part-time basis. He retained his position as a home inspector in his hometown of Boulder, Colorado and was also able to stay home most of the time with Stephanie.

Using what he had learned during his wife’s rocky first year; Jerry targeted his efforts on the GIST patient community as a whole, researching all he could on molecularly targeted therapies, signal pathways and GIST biology. He had truly found his calling.

When Executive Director, Norman Scherzer introduced him at meetings, it would be as the third smartest man in the world. 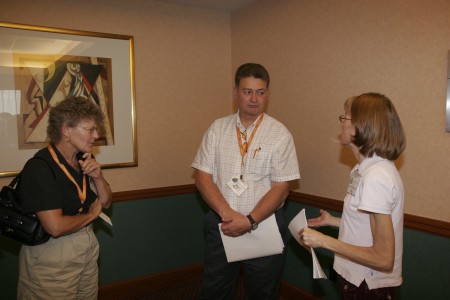 “I say that because I assume there are two people in the world who are smarter than him… but I haven’t met them.”

Eventually, in 2004, Jerry became the full-time Science Coordinator of the Life Raft Group.

Says Stephanie, “We get calls from patients 24 hours a day, seven days a week on every phone we have. He is always giving pep talks and positive thinking to people and different ideas.”

One such person is Judi Lifton, whose partner, Lee, experienced great difficulties in his GIST journey. Over the course of years, Jerry offered whatever help he could: analytical and supportive.

“Jerry Call is a cross between Johnny Appleseed and Albert Einstein,” laughs Judi, “Appleseed was creative and Einstein was calculating. Jerry really was a wonderful sounding board; he was an innovator.” 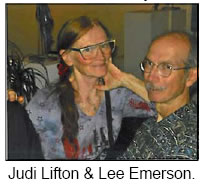 Lee passed away in January 2007, but Judi and Jerry still speak regularly, “He became a friend and I can’t say enough about him. He is really a special guy.”

This kind of story is not uncommon in the GIST community; to many, Jerry is the man in the machine, climbing out of the ether and empowering patients to manage their own care. He works every day to level the playing field between patients and medical professionals.

This has not gone unappreciated in the GIST medical community. At a 2006 Life Fest meeting in Dallas, Texas, Dr. Jonathan Fletcher, LRG Research Team leader, stood before a crowd of over one hundred to accept an LRG award of “Researcher of the Year”; during his speech he took a few moments to thank Jerry for his contribution to GIST research.

“I speak for all of my research colleagues in GIST in assuring you that if there is some angle out there which is relevant, a new drug that is being used for some other tumor, that smacks of a promise in GIST, then Jerry is going to in his genteel, quiet way let us know about it, and he doesn’t do so in a kneejerk way. He thinks about it, he considers the possible payoff and when we get an email from Jerry or a call from Jerry, we always know it’s something good,” announced Fletcher, “We really value his oversight and judgment when it comes to scientific matters.”

The LRG Research Team has grown in size and scale since that speech, but the team continues to rely extensively upon Jerry for his suggestions about important areas of research focus in GIST, insists Fletcher.

Indeed, Jerry has grown to become something of an icon in the GIST community. Some see him as that mysterious benefactor in the computer, some as the friend they’ve been searching for, even more as the man who gave them the strength to get back in the driver’s seat of their own medical care. But to one woman—Stephanie Call—he’s still just her soul mate, the man who saved her life.

“He’s been through so much with me,” says Stephanie, “I’ve been close to death like three times. He is a very strong person, a very dedicated person, and loyal.”

Despite numerous oncologists and specialists proclamations to the contrary, Jerry never accepted that it was Stephanie’s time to go. In August, Jerry and Stephanie celebrated their 25th wedding anniversary; this month, they will celebrate her 10-year “cancer”versary.

A note from Jerry Call:

Stephanie would not be alive today without the help of many wonderful doctors and nurses. Special thanks goes to Dr. Keith Skubitz, University of Minnesota, who allowed Stephanie in to the Sutent treatment-use trial. He could easily have said she was too sick to qualify. Thanks to Dr. Dwight McKee for his compassion and thinking outside the box. The ICU of Boulder Community Hospital did a fantastic job in a crisis in 2003. Thanks to Dr. Charles Blanke who took care of Stephanie in the Gleevec phase II trial. Thanks to Dr. George Demetri for his compassion, wisdom and support through the years. The nurses at RMCC and BCH have done a wonderful job of taking care of Stephanie over the last 10 years. And last, but not least, thanks to Dr. Jenny Fox, ‘Stephanie’s oncologist, for taking care of Stephanie for the last 7 years and for putting up with me for all that time.