On April 12, the National Cancer Institute (NCI), the American College of Surgeons (ACOSOG) and Novartis pharmaceuticals announced that a phase III trial studying Gleevec use to prevent recurrence in patients whose primary Gastrointestinal Stromal Tumor (GIST) had been removed by surgery would be ended early because it had met its primary endpoint of increasing recurrence free survival with a statistically significant hazard ratio of 3.1. Information on over 600 patients was used in the analysis. In the study, patients were randomized to either Gleevec or a placebo. Neither the patients nor their physicians were told which group they were assigned to. One group received Gleevec at a dose of 400 mg per day for one year, while the second group received placebo for one year (See Note). 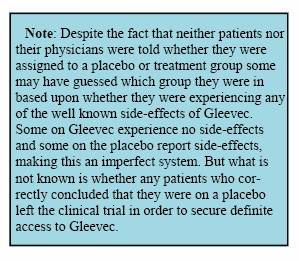 Although the trial protocol also permitted patients whose primary tumor resection did not result in clear margins, we do not know if there were sufficient numbers of such patients enrolled to permit meaningful analysis.

Amongst the critical questions this clinical trial was not designed to answer:

Trial investigators are in the process of notifying all the clinical trial patients about these developments. Patients that were receiving a placebo at the time the trial ended will be given the opportunity to receive one year of Gleevec at no cost. It is not clear as we go to press whether placebo patients who completed the one year clinical trial period prior to the end date will also be offered free Gleevec.