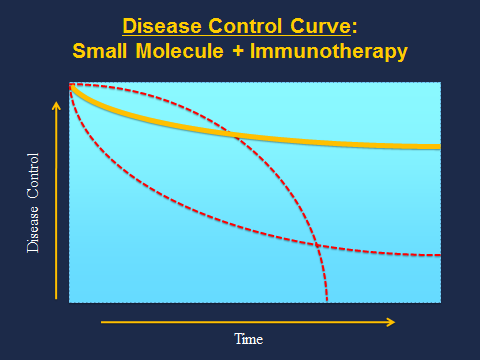 A new clinical trial combining targeted therapy with immunotherapy has just opened at Memorial Sloan-Kettering Cancer Center (MSKCC). This trial is the culmination of extensive pre-clinical investigations by MSKCC researchers.

Although treatment with Gleevec is highly effective, about 50 percent of advanced patients will become resistant to Gleevec within two years. Resistance remains a major problem that is not fully addressed by Sutent or other treatments. Although these drugs help, most advanced GIST patients will eventually become resistant to all current therapies.

The primary mechanism of action of current GIST therapies, including Gleevec and Sutent, is inhibition of KIT signaling (or PDGFRA in PDGFRAmutate GIST). Working independently, at least three different groups have also noted a significant anti-tumor response by the immune system when Gleevec is given to GIST patients.

The new trial will try to leverage the existing benefit of KIT inhibition by adding another drug to enhance the antitumor immune system response. (See Figure 1.) To inhibit KIT, researchers will start by giving GIST patients dasatinib (brand name SPRYCEL®), a drug that is already approved for leukemia, but not for GIST. After a one week run-in period on dasatinib, patients will be given ipilimumab (brand name YERVOY ™). Ipilimumab is a new drug that was recently approved to treat metastatic melanoma. Although both drugs are approved, the combination still needs to be tested for safety and maximum dose, so this is a Phase I trial. Dasatinib and ipilimumab are both made by Bristol-Myers Squibb.

Dr. Vinod Balachandran, Ronald DeMatteo, MD, FACS, and colleagues recently published some of the results of their work on how Gleevec affects the immune response in GIST patients.

Dr. DeMatteo is the Vice Chair, Department of Surgery and the Head of the Division of Surgical Oncology at MSKCC. Dr. DeMatteo is well known in the GIST community as a surgeon and also as a leader in trials of adjuvant Gleevec. MSKCC has had a long history in immunotherapy that traces its roots back to the end of the 19th century, when another surgeon, Dr. William Coley, noticed that some sarcoma patients that got an infection seemed to have dramatic responses to their cancers.

The recent MSKCC research appeared in Nature Medicine and was titled, “Imatinib potentiates antitumor T cell responses in gastrointestinal stromal tumor through inhibition of Ido”. Ido is an enzyme (a type of protein), that increases (catalyzes) the conversion of tryptophan into metabolites. These metabolites promote the development, stabilization and activation of Treg cells. These cells are special immune system cells that regulate the immune response. Treg cells tend to reduce the immune response; too many Treg cells and the immune system cannot mount an effective antitumor response, too few Treg cells and the immune response may be too strong and it could attack normal tissue as well as the tumor.

Some cytotoxic agents, such as cyclophosphamide, can reduce Treg cells throughout the body. While this can increase the antitumor response, it can also increase autoimmune responses. Therefore, a strategy that reduces Treg cells only within the tumor is an attractive alternative. DeMatteo and colleagues found that imatinib was able to achieve this selectivity by reducing Ido within the tumor, resulting in less Treg cells within the tumor but not having an effect throughout the rest of the body. With less CD8+ T cells in the tumor, more tumor destroying immune cells, CD8+ T cells, were able to get to the tumor. The MSKCC team’s initial research was in a GIST mouse model, developed in the lab of Dr. Peter Besmer. Dr. Besmer has also shown that dasatinib works a bit differently than Gleevec in GIST. Although both inhibit KIT, dasatinib (a KIT/Src inhibitor) also inhibits signaling between cells and their environment, through inhibition of the focal adhesion kinase (FAK)/Src pathway. This survival pathway is actually increased with treatment with imatinib. Conversely, in addition to inhibiting KIT, imatinib inhibits STAT3 and STAT5 in GIST whereas dasatinib does not.

After the mouse experiments, the results were repeated in GIST cell lines (GIST-T1 and GIST-T1R) and finally in samples from 45 matched blood and tumor specimens that were obtained from 36 GIST patients undergoing surgery. The team noted that both regulatory T cells and T cells with antitumor capabilities were able to infiltrate the GIST tumors. Compared with resistant tumors, Gleevec-sensitive tumors contained greater numbers of CD8+ T cells (as well as CD3+ T cels). In two of three patients that had both Gleevec-sensitive and Gleevec-resistant tumors removed at the same time, they observed a higher ratio of CD8+ T cells to Treg cells in the sensitive tumors. In addition, in 13 patients they tested, the ratio of CD8+ T cells to Treg correlated with IDO protein expression, suggesting that inhibiting IDO was primarily responsible for the positive effect on immune cells.

After noting the positive effect of CD8+ T cells in the mouse model and responding GIST patients, Dr. DeMatteo and colleagues sought another method to influence T cell response. They added an inhibitor of CTLA-4 to Gleevec. CTLA- 4 (cytotoxic T lymphocyte-associated antigen) is a known modulator of effector T cells, Treg cells and Ido. In their mouse model, this combination significantly decreased tumor size.

As stated previously, ipilimumab was recently approved for treatment of metastatic melanoma. Ipilimumab is a drug that blocks CTLA-4. It is the first drug that has been shown to improve survival in advanced melanoma patients, increasing median overall survival from six months (in patients that received a different drug) to 10 months. While this is good by cancer standards, the really interesting thing about this drug is that some of those patients had a very long response to the drug, the kind of response that cancer patients hope for. In one trial testing ipilimumab with interleukin- 2, 17 percent of melanoma patients had a complete response. With longer follow-up, the results of three trials (alone or in combination with interleukin- 2 or gp100 peptides) suggest that some patients have a very long response; with 14 of 15 patients that had a complete response, still in complete response with a median follow-up of 54+ to 99+ months.

The principal investigator for the new clinical trial will be Richard D. Carvajal, MD. Dr. Carvajal is a medical oncologist with a special interest in melanoma and sarcoma. Dr. Carvajal has extensive experience working with ipilimumab.

The trial will have two stages; the first stage will be open to all GIST patients, both sensitive (no previous Gleevec and/or Sutent) and resistant. Once the highest safe dose of the combination is determined, the second stage will open. In the second stage, only third-line patients (resistant to Gleevec and Sutent) will be eligible. This is a really interesting and potentially important approach. One possibility is that the sensitive patients could have a really good response to this combination, since they would potentially have KIT inhibition (dasatinib) as well as Ido inhibition (which is KIT/ETV4 dependent) due to the dasatinib and CTLA-4 inhibition from ipilimumab. Thus the inclusion of Gleevec-naïve as well as Gleevec/Sutent resistant patients will allow researchers to explore the relationship between KIT/Ido inhibition to response in this combination.