According to Dick Kinzig, organizer of the original Chicago group, “Six Life Rafters, two spouses and a daughter were able to make the meeting.” Since 2002 the group has been meeting three times a year at Wellness Place in Inverness, Illinois, 30 miles northwest of Chicago. Patients from all over the Chicago area including Central Illinois, NW Indiana, and Wisconsin have attended over the years.

On September 8, 2012, a Ten Year Celebration accompanied the regular meeting. Twenty-six attended including 14 patients. Of the six original patients at the first meeting, three are still with the group. Dick Kinzig and Paula Vettel attended the tenth meeting with their spouses Phil and Sue, respectively. Original members Bob (patient) and Jeannie Book still live in Indianapolis but did not make the celebration. Champagne and cake were served.

The memorial list for Chicago-area GIST patients includes over 30 members who either attended or were invited to attend. It includes Carol Berres, Pat Novicki and Nancy Hughes Welsh who were at that first meeting but who are no longer with us having lost their fight with GIST.

The Bill Buchanan Chapter was made possible by the efforts of the late Bill Buchanan, a longtime Chicago chapter member whose wishes led to a flurry of donations to that made it possible for the group to find a home at Cook County Hospital. 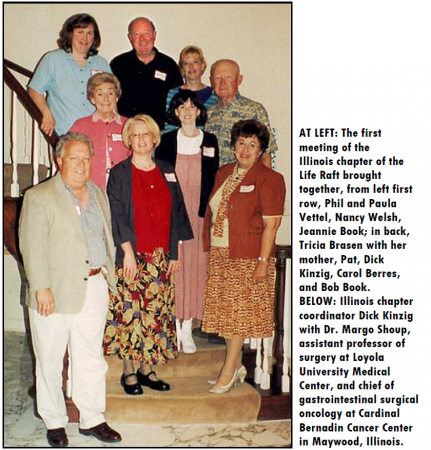