Collaboration Lays the Groundwork for Breakthroughs in GIST

This article originally appeared in the January 30th edition of Cure Today. 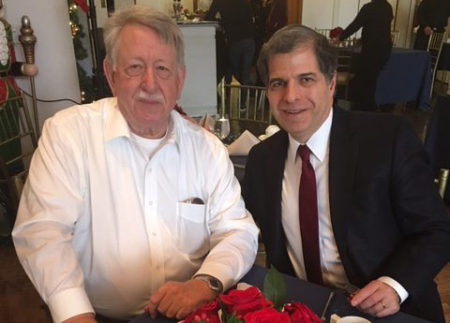 Less than two decades ago, Gleevec (imatinib) drastically changed the frontline treatment for patients with gastrointestinal stromal tumors (GIST). However, as patients develop resistance to Gleevec, as well as second and third line treatments, such as Sutent (sunitinib) and Stivarga (regorafenib), they often have no more options left.

The Life Raft Group, a patient advocacy group, is teaming up with researchers to address this problem and lay the groundwork for more personalized – and effective – treatments for patients with this rare cancer.

“There’s an absolute need in the GIST community for a new drug approach that will allow a new therapeutic way of seeing therapy for this cancer,” Gary K. Schwartz, M.D., chief of the Division of Hematology and Oncology at New YorkPresbyterian/Columbia University Medical Center, said in an interview with Cure.

Schwartz is spearheading the clinical side of the project, where researchers are using the VIPER algorithm software to analyze tissue samples from the Life Raft Group’s patient database to find “bottleneck” pathways, called master regulators, where the pathways driving cancer cells converge into one or two pathways. Identifying these would give drug developers an easier target to block.

“GIST is one of the tumor types we’re focusing on, but frankly, we’re using the same technology to look at other cancer types as well, because the bottleneck approach isn’t unique to GIST. It’s common to all cancers,” Schwartz said, mentioning that there are similar projects in the works for triple negative breast cancer and neuroendocrine tumors. However, the GIST project is currently the most advanced.

Both Schwartz and Norman Scherzer, the executive director for the Life Raft Group, agree that this project would not be possible without the collaboration between the groups.

“Hospitals interact with patient groups, but usually in a ‘soft’ kind of way, where information is shared,” Scherzer said. “This is different because we have a different mission that drives the Life Raft Group. The best way I can describe it is ‘patient­powered science.’ We’re all about making patients happy and giving them psychologic and informational support, but mostly, we’re about using the power of patients to drive the scientific process.”

Since GIST is considered an orphan disease by the FDA – less than 200,000 patients currently living with this disease – researchers need all the tissue samples that they can get to accurately find these pathways that could lead to new treatment strategies.

“Unless you have coordination with organizations like the Life Raft Group, you can’t do clinical trials,” Schwartz said. “It takes multiple centers and it takes the support of patient advocacy groups to inform patients of what’s going on and educate them in the process, because we need lots of tissue from a lot of patients to design these maps.”

“Hopefully this methodology will transform the way we select drugs for cancer care, not just in GIST, but across all solid tumors,” he said.