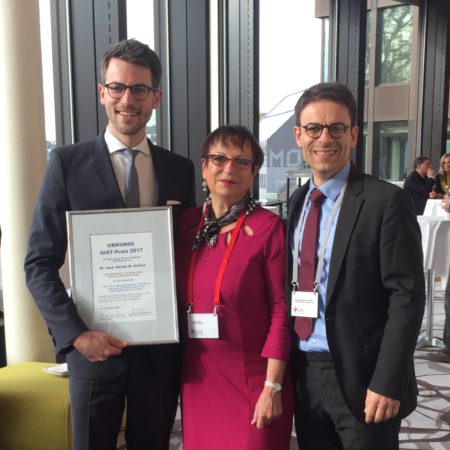 , the support group for patients with gastrointestinal stromal tumor (GIST) has awarded its science prize for the eighth time. The 2017 GIST prize, worth CHF 10,000, was awarded to Dr. Adrian Siefert of the University Hospital, TU, Dresden, Germany for his publication on “PD-1/PD-L1 Blockade Enhances T-Cell Activity and Antitumor Efficacy of Imatinib in Gastrointestinal Stromal Tumors.”

Gastrointestinal stromal tumors (GIST) are the most common sarcomas and the oncogenic driver is usually a KIT or PDGFRA mutation. Although GISTs are often initially sensitive to imatinib or other tyrosine kinase inhibitors, resistance generally develops, necessitating additional therapeutic strategies. The immune system contributes to control of tumor growth and plays a major role in the response to cancer therapy.

Both T cells and tumor associated-macrophages (TAMs) were important in the maintenance of the tumor microenvironment and were altered by treatment with imatinib. The inhibitory receptor PD-1 played a crucial role. In a mouse model of GIST, PD-1 and PD-L1 blockade enhanced the antitumor effects of imatinib by increasing T cell effector function. TAMs had anti-tumoral properties in human GIST, but became pro-tumoral after imatinib therapy. Immunotherapy may provide an important adjunct to imatinib in the treatment of GIST.

The award ceremony took place on November 23, 2017 at the semi-annual meeting of the Swiss Group for Clinical Cancer Research (SAAK), held in Zurich. The laudation was held by Dr. Michael Montemurro, CHUV Lausanne, member of the GIST Group Award Committee.

The GIST Group Switzerland is an organization for the support of those affected by gastrointestinal stromal tumors. It supports every effort to improve the treatment of GISTs. To this end, the GIST Group awards an annual prize to organizations or individuals committed to achieving this goal. The prize is awarded for lectures, publications, panel discussions, scientific or socially relevant projects. The award of CHF 10,000 is donated by the GIST Group Switzerland.

The Swiss Group for Clinical Cancer Research (SAKK) is a non-profit organization, which has been conducting clinical trials in oncology since 1965. Its primary objective is to research new cancer therapies, to develop existing treatments further and to improve the chances of a cure for patients with cancer. This takes place through cooperative projects within Switzerland and in collaboration with centers and study groups abroad. The SAKK is supported by a service- level agreement with the State Secretariat for Education, Research and Innovation (SERI) and also by partners such as the Swiss Cancer League and Swiss Cancer Research. For more information, go to www.sakk.ch,  or email info@sakk.ch.