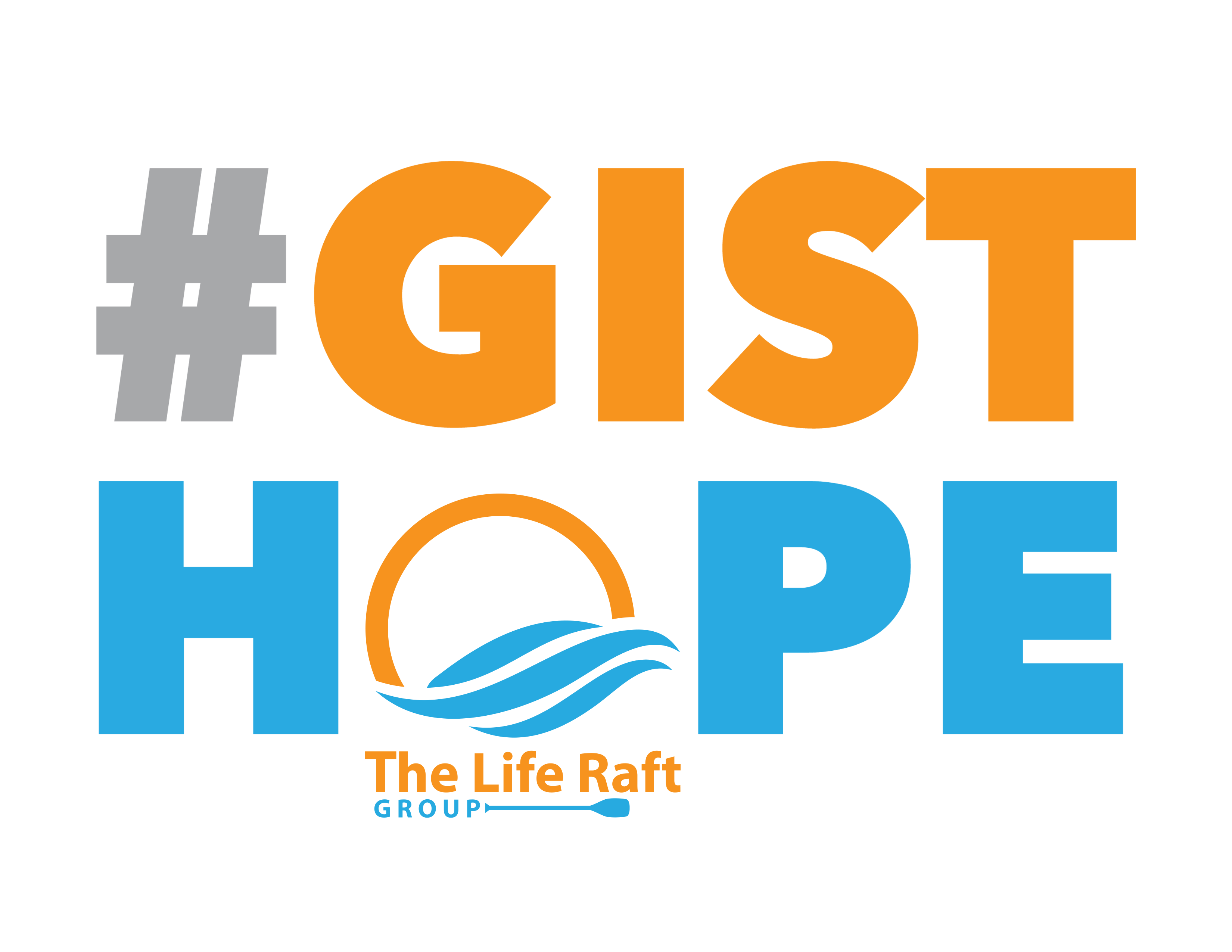 For GIST patients, long term survival is the ultimate goal. A number of factors may influence long term survival – some of these are demographic and clinical, like mutational subtype and genetic factors. However, there are a number of others that are perhaps more subtle, such as lifestyle, attitude, and access to treatment, experts, and advice. Illustrated here are the anecdotal accounts of two long-term survivors and how they managed to survive and thrive for over 20 years (and counting) with GIST.

Chuck Korte knows a little something about long-term survival. Originally misdiagnosed in 1996 at 53 with leiomyosarcoma (LMS), he has lived with GIST for over 24 years. Treated with two rounds of traditional chemotherapy, Chuck’s tumor was not responsive. The tumors continued to grow. There seemed to be no clear answers. 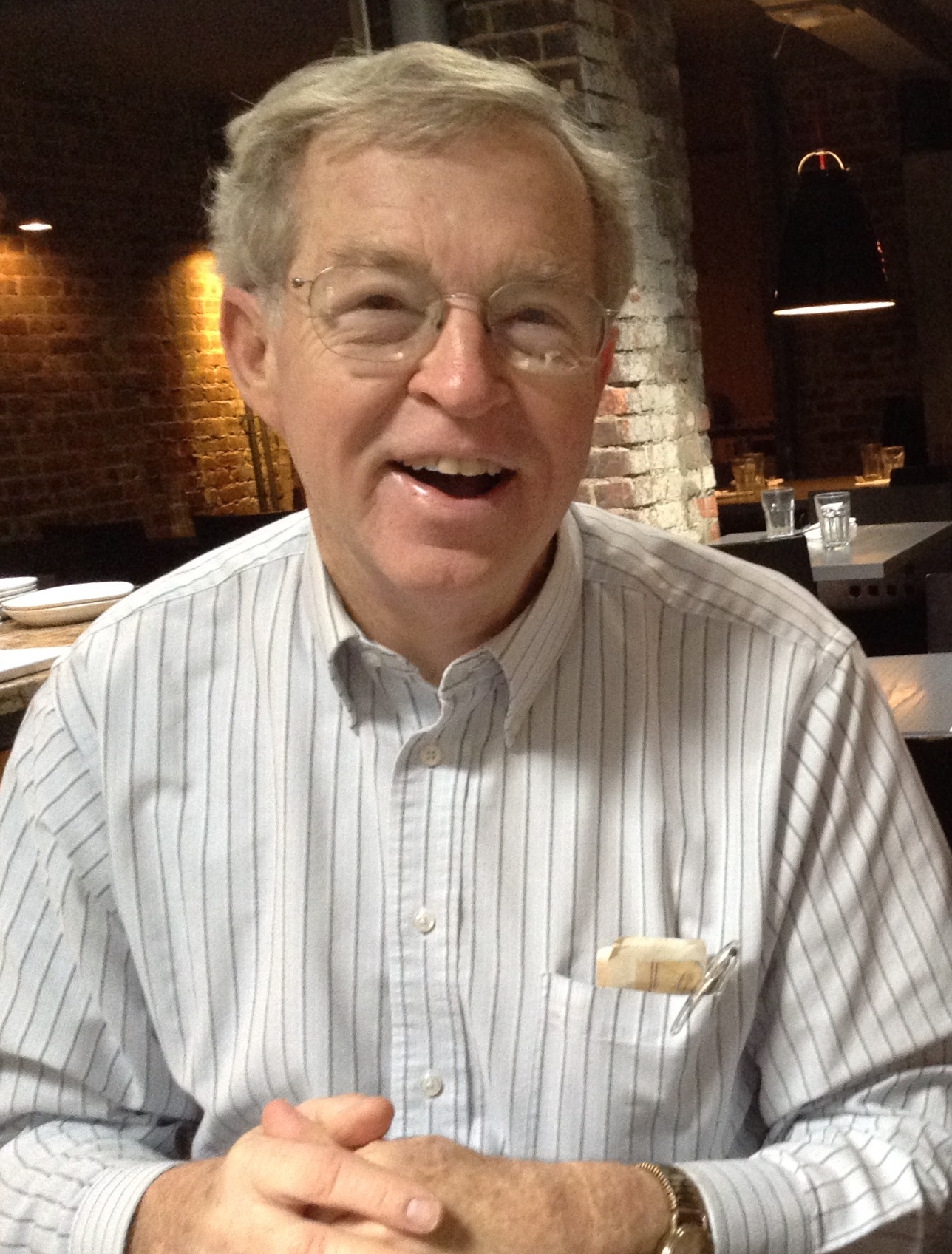 “When I first found out I had cancer, it was terrible, just devastating. It was like being in a pit for three days. We were distraught, frightened and depressed. However, I’m a very optimistic person so it was just a few days of being really very down. People always commented on me being in such a good mood because, you know, cancer, but I was always hopeful,” said Chuck sharing about his initial feelings about being diagnosed with cancer, “but I always felt I would survive.

Chuck kept searching for answers and learned about a new clinical trial for STI-571 (imatinib) through fellow LMS patients on the LMS Listserv. Chuck commented that he thought that it was a good thing he didn’t actually have LMS because he’d learned about this powerful new drug. “The question at that point was, did I have the mutation that this drug could treat? So, I wanted to have that variation because then I could be on the clinical trial.”

He joined the first clinical trial for imatinib for GIST patients in 2001. In that trial, there was no placebo and all participants were on either 400 or 600 mg; Chuck began on 400 mg. After the first month’s treatments, scans revealed progression and though that was discouraging, the team at Dana Farber upped his dosage to 600 mg. The next month’s result showed rapid shrinking. Though that was thought to be the proper strategy at the time, now the doctors believe what was considered progression was possibly an inability to gauge the size of the tumors accurately with the tools available at the time. It may just been a temporary enlargement prior to the start of shrinking.

Chuck was able to maintain his career as a professor of social psychology and gerontology. He simply lived his life with GIST. He credits a rich spiritual life, a great family foundation, and a close-knit community as tremendous blessings and GIST as a real obstacle that’s he’s been able to overcome with a miracle medicine.

While Chuck was able to maintain the 600 mg dosage for close to 18 years, his kidneys began to fail. Reducing his dose two years ago to 400 mg stabilized his creatinine levels, and this April during a telemedicine visit, his doctor lowered his dosage once again, to 300 mg for the sake of his kidneys. He’s feels fortunate that his side effects have been manageable and he’s been able to maintain a healthy lifestyle with wife Peggy’s help.

Chuck has also been an active member of the LRG’s GIST Listserv (since its creation and presently on its newest incarnation GISTChat), staying in touch with other GIST patients for support and to encourage others on their own journeys.

He knows that he’ll be on Gleevec for the rest of his life and he’s ok with that.

“I’m always in a good mood. Doctors told me, ‘You’re not going to die from GIST’. It’s incredibly receptive to Gleevec. Exceptionally so. I do have to worry about my kidneys and the damage that’s been done, but I’m so gratified that the cancer is being very well controlled by the Gleevec and will as long as I keep taking it. There are just too many instances where tumors have grown again. I’m fine taking it.” 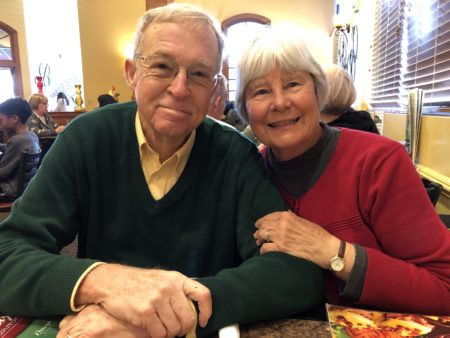 What began as a clinical trial for Chuck has turned into a clinical study conducted at Dana Farber to examine the long-term effects of imatinib. While life with cancer is a life of constant surveillance, it is one he feels he has lived well. He attributes living well to his basic outlook on life, which is very optimistic, as well as his wife Peggy’s support. “I have incredible support, beginning with my wife. I couldn’t have done this without her. It’s been a real team approach.”

Chuck and Peggy met as college freshman and have been married for over 50 years. They have two children (a son and a daughter) and four grandchildren, the oldest of whom just graduated from North Carolina State. Chuck is enjoying his retirement and is very active these days on GIST Chat (the new incarnation of the Listserv) encouraging other GIST patients to stay positive and keep looking for answers.

He also has had no great worries over COVID-19 since his community has always been very close and watches out for each other. He and Peggy have been able to stay home, work on various hobbies and reading and connect with family, friends, and doctors virtually. 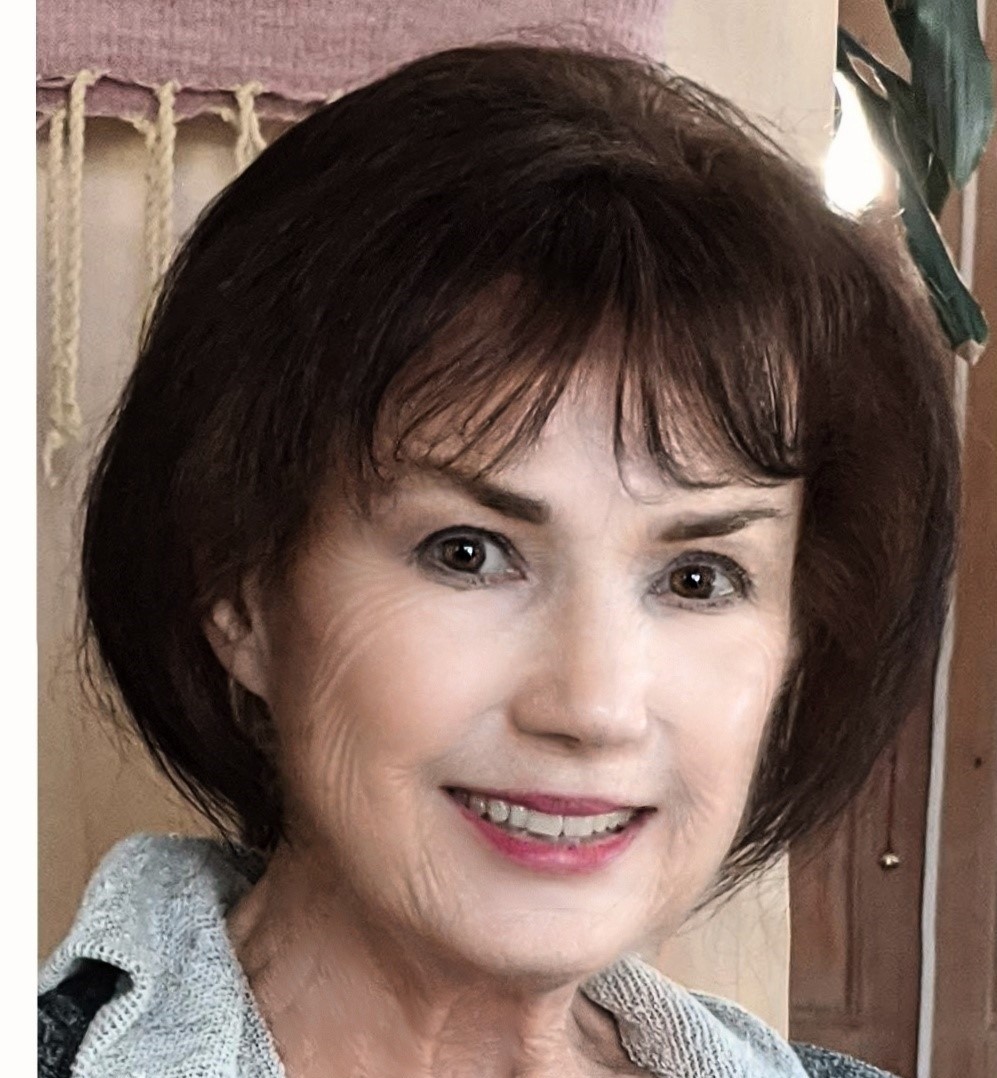 Factors in long-term survival can’t always be measured by statistics or medical best practices. Chuck Korte sees his positivity and faith as a major factor in his overall survival, but for Dina Wiley, her determination was her driving force. Both patients have factors in their lives that have affected their successful long-term survival.

Dina, like Chuck, had false starts as far as a firm GIST diagnosis. In 1986, Dina was working as a human resources specialist in southern California and was married to husband Sam for only about a year when a tiny lump was discovered in the lining of her rectum and vagina. Categorized as a small, benign fibroid, neither her doctor nor Dina was overly concerned. “I guess this happens, people get fibroids, and life goes on. And it did for 10 years,” commented Dina.

The fibroid remained stable until 1996, when within a year it doubled in size and continued to  grow. Surgery was performed at a local hospital in 1996 and she was given a diagnosis of leiomyoma, a benign smooth muscle tumor that very rarely becomes cancer. Dina was relieved that she didn’t have cancer.

But by 2002, the fibroid had returned and Dina became quite concerned. Growth was checked every three months, but by the end of the year it had grown significantly and surgery was recommended again. In the spring of 2003, she had a second surgery. The biopsy performed during the surgery revealed a diagnosis of leiomyoma once again and because this was a second surgery, there was no possibility of clear margins.

Dina’s world was turned upside down when her doctor shared results shared from a second pathologist (at a world-renown hospital in the East coast) who said it was leiomyosarcoma (LMS), a rare type of cancer that affects smooth muscle tissue. Dina and Sam’s world changed when they heard the word cancer. “We didn’t know what that was. We didn’t know what was going to happen. Neither of us have ever experienced any kind of cancer, and had no way of understanding it,” said Dina. “I was also very concerned that the bleeding I’d been having from the surgery hadn’t stopped.”

Dina’s surgeon explained that without clear margins the cancer was likely to return and surgery shouldn’t be delayed. Another surgeon she consulted, a sarcoma specialist, also believed there was no other option, but radical surgery to eradicate the possibility of recurrence. The treatment plan was to remove her rectum and vagina completely and perform a colostomy. Dina considered the enormity of the changes she would undergo physically and emotionally, and refused the surgery. “I opted out. I didn’t believe the diagnosis. Perhaps I was hard-headed, but I refused to accept this diagnosis and treatment.”

“So, I was faced with this cancer diagnosis, but the lump had been removed and the cancer wasn’t there right now. What if it never came back? I didn’t see any reason to go in and do this horrible surgery. They said they could partially reconstruct the vagina, but I’d still have to deal with a colostomy,” said Dina, “Perhaps I was hard-headed, but I refused to accept this diagnosis and treatment.”

Dina pursued other opinions. “My husband had my back. He kept me going and he gave me the hope and the faith that I needed to believe that something was going to work.” A second surgical oncologist, at a nearby cancer research hospital, confirmed the LMS diagnosis and recommended radiation therapy, an option that Dina also passed on as she felt it would do too much damage. Another specialist, in colorectal surgery, felt he had a surgical technique that wouldn’t require a large incision and there would be no reason to have a ‘permanent’ colostomy. Even though this was offered by a renowned specialist at yet another cancer research hospital, Dina was still skeptical and wondered if it would work. Her options seemed limited and she was actually considering the surgery when she met Dr. Gene Sherman, a local oncologist. He presented her case to the tumor board at Torrance Memorial Medical Center and the unexpected happened.

Be your own truth seeker! – Dina Wiley 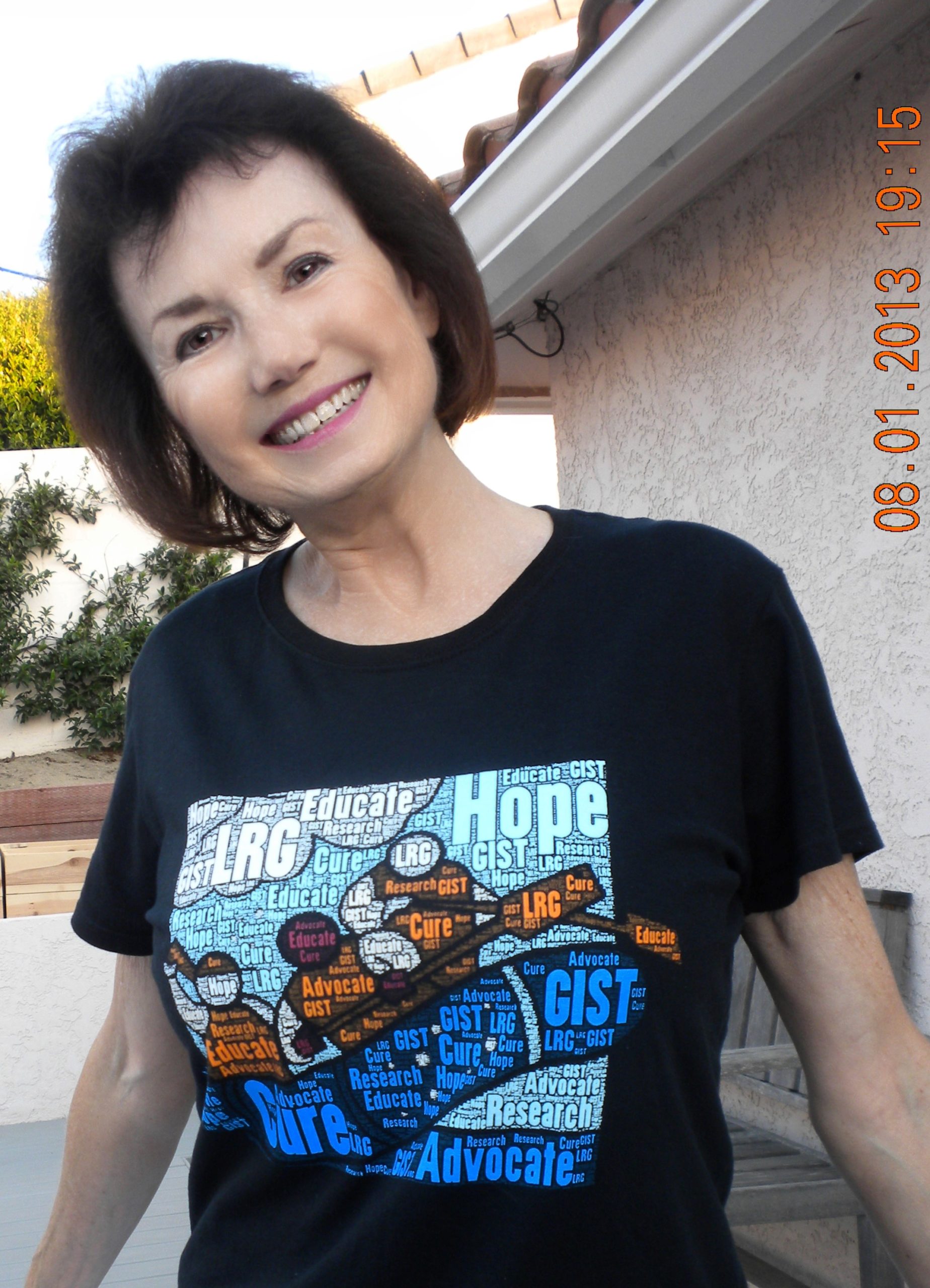 At the tumor board, another pathologist questioned the results because he suspected GIST and performed a test for c-KIT. “Not only did this amazing pathologist test the most recent specimen for GIST, he went back to storage and pulled my specimen from 1996, and tested it,’ said Dina, “Dr. Sherman could barely control his amazement when he delivered the news that it was GIST and not LMS.” Of course, Dina was surprised at this and wanted to know why it mattered. The doctor explained that GIST could be treated with a pill once a day – Gleevec.

Dina finally had an option that she could live with. “I was so happy I wanted to hug him!” said Dina. Her big takeaway from this experience was to never accept the first diagnosis. “And from my experience, it isn’t always the top research hospitals that can be trusted, my little town hospital did what a larger, major hospital could not,” declared Dina.

For 17 years, Dina has taken Gleevec, though not without ups and downs. After about nine months, Dina had had enough of the muscle cramping and stomach upset so she decided to stop taking the medicine of her own accord. After a year, she experienced a recurrence and was given the choice of another surgery or Gleevec. Dina resumed Gleevec at 400mg until 2015 when she experienced stage 4 kidney disease and was severely anemic. Since then she’s taken 200mg a day.

Dina’s tools for survival were many – not taking the first diagnosis for the final word, her determination to keep looking for solutions, the support of her husband, and also the support of others like her. She joined the Cancer Support Community in Redondo Beach, CA, and met Dave Murphy of the Sarcoma Alliance, who knew the LRG’s Executive Director, Norman Scherzer, and this is how she connected with the people and resources of the Life Raft Group. She’s also regularly attended support group meetings of The Sarcoma Alliance in Los Angeles since 2004.

Today, Dina is a dedicated patient advocate, active with the LRG as southern California’s State Representative and a voice for GIST in several support groups, both online and in-person. Dina’s positive words bear testament to her survival story, “I was always hopeful it was something else, and I always knew it would be okay.”