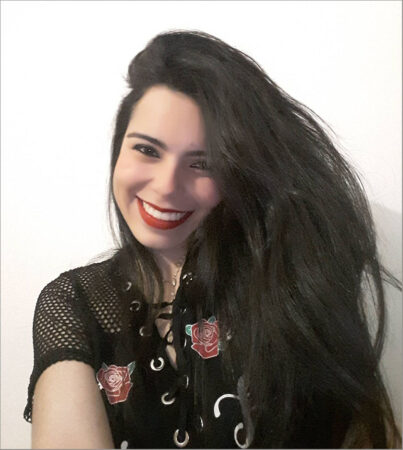 Angel Selena Rodriguez was living what she considered a very normal life. She was studying medicine, playing violin in an orchestra, and enjoying painting and drawing, and university in Venezuela. This GISTory begins with a chronic case of anemia that no doctor could diagnose.

“My story is full of doctors! I only had anemia but no doctor could discover the cause, I went to gynecologists, nutritionists, gastroenterologists, hematologists. They even thought I had anorexia or something like that.”

When it became obvious that there was upper digestive bleeding in October 2016, the doctors had a reason to perform an endoscopy which revealed a tumor in the curvature of the stomach. Angel had surgery in December, and then, she began taking Glivec (imatinib), 400 mg, in February 2017.

This was an effective course of treatment until November of that year when the situation in Venezuela became untenable – no medicine, no doctors, no food. It was a terrible time for the Venezuelan people. When she could no longer find a pharmacy that had imatinib, Angel made the decision to travel to Argentina in September of 2018 and began taking imatinib a few months later. But the time off from Glivec did not benefit Angel. Her doctor in Argentina found that her GIST had metastasized, and her dose was raised to 800 mg.

“At that time, I was working, studying, and living alone in Argentina. But though I was coping with the side effects, I was not able to do all that by myself and I returned to Venezuela a year ago. Now, The Max Foundation is giving me the treatment here (in Caracas) and I can say I’m getting better, I’m feeling good,” said Angel, “This is one of the hardest parts of all that because I really want to become a doctor but it has been tough for me.”

Now, in addition to returning to her studies to become a doctor next year, Angel wants to help others dealing with GIST. Angel was (and is) a part of a foundation in Venezuela called FUNDALMC, and she said, “Wait, if I’m part of this, maybe there is some institution for patients with GIST that I can join too. I was just searching on Google until I found the Life Raft Group, and I was like, “yeah, that’s what I was talking about.” I sent the application form and received an email from Piga Fernández (LRG’s Global Relations Consultant, based in Santiago, Chile) some days later.

“I have received a lot of help and support; I think it’s the reason why I’m still alive because sometimes I wanted to give up but there was always someone to help me out even if I just wanted to cry. I don’t know why but I feel my life is just teaching me that this time hasn’t been a bad part of my life, but a lesson, and our lives are full of lessons that we have to accept, learn and teach to others, so I want to do my part and help people to cope with this,” said Angel.

Bienvenida, Angel, as the LRG’s liaison in Venezuela!

To contact Angel, you can email Piga Fernández at pfernandez@liferaftgroup.org