Understanding the role of mutations and biomarker testing is one of most important things patients must learn. Uncovering the driving force behind each individual’s tumors is not just important, it is critical. Biomarker testing is an opportunity to improve and optimize treatment – possibly avoiding unnecessary treatments and getting to the right treatment sooner. Currently, biomarker testing rates in the gastrointestinal stromal tumor patient population are relatively poor – only about 26.7% of patients have had testing done. The Life Raft Group Patient Registry, which is a group of extremely proactive patients, notes only about 53% of patients are aware of their mutation.

In this post, patient Jon Treder shares his story and his insight on getting mutational testing and self-advocacy.

It’s time to recognize the value of a more precise diagnosis!

Mutational testing was never done until I attended Life Fest Miami 2018 and gained a whole new appreciation and motivation for self-advocacy. I have since learned so much, which has resulted in moving from my original oncologist to a LRG recognized GIST specialist at Stanford, Dr Kristen Ganjoo. I now feel like I am being treated more appropriately. I finally have my mutation – Exon 11: Positive for p. W557_K558 deletion, and I have now strongly advocated for plasma level testing to monitor or better understand the potential for my progression. 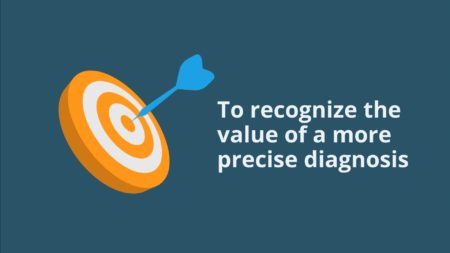 Beginning around 2008 or ’09, I felt a very small tickle in my upper chest right around the bottom of my ribcage on my left side where I later would find out was in my stomach next to my esophagus. I reported it to my local General Practitioner who dismissed it a sternum spasm. On June 10, 2012, while 28 miles out of town on a ranch helping with a large BBQ for 100 guests, my (unknown at the time) GIST ruptured and a GI bleed began, and this overwhelming sense of imminent doom came over me.

I was rushed to the hospital who sent me home indicating that I had a bleeding ulcer. I blacked out at home and was rushed to a second local hospital where I laid for 5 days with no precise diagnoses, and then was transferred four hours away to Stanford Medical Center where they determined within hours that I had a GIST. Resected June 18, 2012, 6 cm Mitotic 2/50, clear margin. I was released with the understanding that they got it all, but also that it could return to any of my abdominal organs, most likely the lungs or liver.

Learning this, I was pretty taken back. I felt that I had lucked out and if I was going to have a brush with a serious disease like Cancer, this was mine and they were successful in fully removing it, so I was home free and it wouldn’t be back. I never felt sick and to this day still do not, so acceptance now has been weird and a challenge.

I had CT Scans with contrast at six month intervals until August 9, 2017 when the CT showed metastases in my liver.There were up to 20 lesions, three or four of notable size, the largest being 1.7 cm. Biopsy confirmed the new lesions were GIST.

This news was a heavy blow to my spirits and sense of longevity. I, of course, shared this news with my immediate family members and then went silent. Silent in my head, quiet, subdued, sad, why me? and discouraged. I turned to burying myself in my favorite folk and rock and roll music, continued my long exercise walks and had lots of conversations with myself. During those conversations with myself, I finally realized I had to accept this. I opened up and began to share my story with my extended family and friends.

I realized by doing this that I was outwardly admitting my condition and it really helped to just FLAT ADMIT TO MYSELF AND ACCEPT THAT I WAS SICK, SICK WITH A TERRIBLE INCURABLE DISEASE. Talking about it openly helped unbelievably, like perhaps an alcoholic learns to deal with their addiction through acceptance. I felt better, much better. I have always been a realist but this was really taking it to a serious level. I became resolved and I remain resolved today. This is what I was dealt, this is what us GISTers have been dealt.

Following the biopsy, I was prescribed 400 mg Gleevec, 1 per day. The pharmacy shipped the generic Teva Imatinib. Within three months the larger lesions all reduced in size and the numerous small ones became less conspicuous. I’ve now been on Imatinib for one year come October 7, 2018.

Mutational testing was never done until I attended Life Fest Miami 2018 and gained a whole new appreciation and motivation for self-advocacy. I have since learned so much, which has resulted in moving from my original oncologist to a LRG recognized GIST specialist at Stanford, Dr Kristen Ganjoo. I now feel like I am being treated more appropriately. I finally have my mutation – Exon 11: Positive for p. W557_K558 deletion, and I have now strongly advocated for plasma level testing to monitor or better understand the potential for my progression.

How do you cope with GIST?

Coping! I feel that I have been especially lucky as a GIST Survivor after learning how some of my fellow GISTers are faring. The effects of having this condition for me have been minimal, with no substantial effects on my life, except for the side effects from the imatinib, the continued 3-month scanning, the fouled up digestive tract and severe cramps which now I have had great success in minimizing. I just move forward with hope, purpose and goals still. I love life, always have, so I keep going.

Easy to say, but from one to another, we just have to accept it. It’s the card we were dealt. We need to accept it, and talk about it. We are all different, but for me, hiding behind it did not work. I am not a person to share much of my personal life with others, except with my wonderful wife. I’ve spent my entire life as a very private person, but talking and sharing my story has helped immensely.

I love to travel the United States. I have spent a lifetime doing it, and continue. I fished Alaska for halibut and salmon for 20 consecutive years, love working around our property raising and insuring the quality of our beef and pork, bringing home fish and love fixing any and all things (Jack of all trades and master of one). I am a retired IBEW Journeyman Wireman.

Motto you live by

Say what you mean, mean what you say and stand behind it…period. Recognize and appreciate responsibility and consequences. Good is good, bad is bad, but without bad, you wouldn’t know just how good good is. They are all good life lessons.

If you would like to talk to someone about mutational testing, please contact our Director of the Life Raft Group Patient Registry, Denisse Montoya at dmontoya@liferaftgroup.org