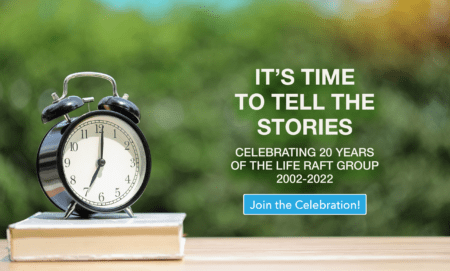 The Life Raft Group is celebrating our 20th anniversary as a nonprofit in 2022. For twenty years, our organization has been serving as a life raft for others navigating their GIST journeys. It is the perfect time for us to share the stories. These stories are of those early pioneers who have helped save thousands of lives; the stories of our brave and inspiring members; the advocacy stories of the challenges patients face globally, and the story of this unique patient advocacy organization. You can read more about our Time to Tell the Stories campaign.

A Caregiver’s Insights on GIST Care by Erawati Bawle

My husband Vishwas’ GIST journey began with acute significant fresh rectal bleeding at 4 am one day out of the blue at age 69 and ended in death seven years later. After a slow physical decline, the final blow was shockingly sudden. Having reflected on the quality of medical care he received, here are some insights I gained regarding a physician’s responsibility towards his/her patient which I hope will benefit others.

It took three episodes of severe rectal bleeding occurring over 13 months before a diagnosis of GIST was made. The first episode started with painless severe rectal bleeding one early morning for which I took him to the emergency room of a reputable hospital, where he was admitted. The gastroenterologist performed a colonoscopy and esophago-gastroscopy, followed by a capsule endoscopy to examine the entire small and large intestine for the source of bleeding. The lower third of his colon had extensive diverticulosis but the gastroenterologist did not think it to be the cause of the bleeding.

The second bleeding episode nine months later was not as severe and he underwent another colonoscopy and esophago-gastroscopy at the same hospital, but the cause of bleeding remained unknown. Should the bleeding recur, the gastroenterologist told him to have the emergency doctor contact him right away, so he could perform another special test to hopefully locate the source of bleeding.

The third episode occurred in a hospital where a complete colonoscopy could not be done (we were overseas at the time), so the gastroenterologist ordered an abdominal CT. The scan revealed a mass, and a subsequent bedside examination of his abdomen found it to be palpable. We returned to U.S. and the doctors ordered another abdominal CT scan which confirmed the same mass. He underwent surgery and the tumor was on the small intestine (ileum), fairly large but it was completely removed.

Given the unknown cause of a significant symptom such as severe rectal bleeding, the missed opportunity for an abdominal physical exam, such a simple investigative tool, felt tragic. Even allowing that a rare condition (such as GIST) may not be at the top of a specialist’s mind, it is certainly a physician’s obligation to keep searching by way of discussing the case with colleagues, perhaps ones at larger academic institutions, or centers of excellence and reviewing the medical literature. His primary tumor must have grown during the 13-month delay, perhaps even spread to the peritoneum, while he was enduring the preparation for the colonoscopies. GIST support group members’ stories are replete with incidental and delayed diagnoses. The constant refrain among them is to be your own advocate. I feel this responsibility is misplaced.

Insight 2: Lack of diligence in monitoring easily detectable and treatable side effects

About 80% of GISTs show a mutation in the gene encoding the KIT receptor tyrosine kinase. Surgery is the preferable option of treatment based on size and location. If a KIT mutation is detected, the patient is prescribed a tyrosine kinase inhibitor (TKI) to prevent a recurrence or treat metastases. My husband requested a molecular analysis of the tumor as the surgeon did not note this as important for treatment decision-making. A mutation in the KIT gene was detected and he was prescribed imatinib, the first line TKI considered as standard of care. About 2 ½ years later was switched to sunitinib, a second-line TKI, when abdominal CT scans indicated tumor progression in the peritoneum. Sunitinib gave him a lot of trouble. He experienced significant fatigue, was constantly feeling cold during a hot summer, had hardly any appetite, and to me was showing slow reaction time and reduced hearing within a few weeks of starting treatment. A known side effect of sunitinib is low thyroid hormone level, which is closely associated with my husband’s symptoms. The medication guidance accompanying the prescription recommends thyroid hormone level/TSH at baseline and then again at regular intervals for monitoring. Despite this guidance and my husband’s reporting of symptoms consistent with low thyroid hormone level, serum TSH or thyroxine level was not assessed. The oncologist recommended discontinuation of sunitinib after five months of use because of these intolerable side effects and prescribed the next TKI, regorafenib. He experienced more significant side effects with regorafenib, so discontinued it after five weeks.

Now, the only remaining treatment option to control the GIST was to take part in a Phase 2 clinical trial of PLX9486. However, his blood tests showed elevated serum creatinine level (it had been inching upwards for a while) and thus made him ineligible for the trial. The oncologist suggested to repeat the creatinine test after drinking lots of water for a few days. At our suggestion, we got a referral to see a nephrologist, who found that my husband’s serum TSH level was 25 times above the upper limit of normal. High TSH is a clear sign of a low thyroid hormone level. The nephrologist prescribed Synthroid (oral thyroid hormone medication) and my husband started feeling much better within two to three days and in six months the TSH came down to normal. I can’t help but wonder whether he had been suffering from a very low thyroid condition (hypothyroidism) for the prior four to five months, and whether he could have experienced the tumor control benefit of sunitinib (which is particularly effective against GIST with the KIT mutation he had) if the side effects were investigated more promptly, thoroughly and treated accordingly.

As his hypothyroidism started to improve, he was able to take part in the phase 2 clinical trial of PLX 9486. While taking this drug, his overall health remained good, though he lost weight and had less physical endurance. He was still independent, cognitively normal, engaged in many intellectual pursuits, and could easily drive a car on freeways for 50 miles. The PLX 9486 had to be discontinued after 17 months because of significant tumor growth. Vishwas wanted to try another anti-GIST medication.

Avapritinib is another TKI that was in a phase 3 clinical trial at the time. Although my husband’s trajectory of different TKIs made him ineligible for the trial, the oncologist recommended avapritinib on an expanded access basis. The oncologist explained that avapritinib shared many of the same side effects associated with the other TKIs, but additionally it could impair higher neurological function such as short-term memory and focus. He was advised to stop driving. The doctor mentioned that these symptoms were reversible upon discontinuation of the drug. My husband signed the consent, feeling thankful that he could access the drug outside the clinical trial.

As stated in the consent form, a small proportion of patients treated with avapritinib develop neurological changes such as anxiety, depression, confusion, tremors, attention problems, speech problems and less than 1% develop loss of contact with reality, hallucinations and suicidal thoughts. Despite these possible effects, the clinic did not check in with my husband about how he was feeling. Five weeks into therapy, he was having some hand tremors and difficulty in word retrieval while talking, and was losing interest in life. At a seven-week follow-up visit, a detailed neurologic and cognitive evaluation was not done and he was advised to continue the drug. Ten days after the visit, he exhibited progressive confusion, hallucinations, and deteriorating appetite, and he discontinued the drug on his own on a Saturday morning. His oncologist, on the following Monday, supported this decision and referred him for a brain MRI.

After learning that there was a long wait for an outpatient MRI, I took him to the ER; he was admitted and an MRI was obtained. The MRI excluded other brain pathology, including brain metastases. At that point, the oncologist found out from other trial investigators that effects on the brain were more severe in patients aged 65 years and older and that after stopping avapritinib, the median neurologic recovery time was 2-12 days, with some patients taking as long as 35 days to recover while about a third never recovered. My husband came home with arrangements for home rehabilitation therapy. However, his condition continued to worsen, and he passed away seven weeks after the drug was stopped. The best we could tell, he did not realize what was happening to him or that the end of his life was near.

I often think about whether a more thorough discussion with the oncologist about avapritinib’s side effects before initiation would have resulted in more careful monitoring for early signs of effects on his brain, earlier discontinuation, and a potential reversal of his symptoms. Today, avapritinib (Ayvakit) is approved for clinical use, and the label recommends a formal cognitive assessment prior to initiation as well as frequent follow-up assessments. My hope is that clinicians follow this guidance faithfully. More generally, I hope that clinicians take seriously their responsibility to counsel patients about the potential serious side effects of an investigational drug so that critical decision-making occurs in an informed and timely manner.