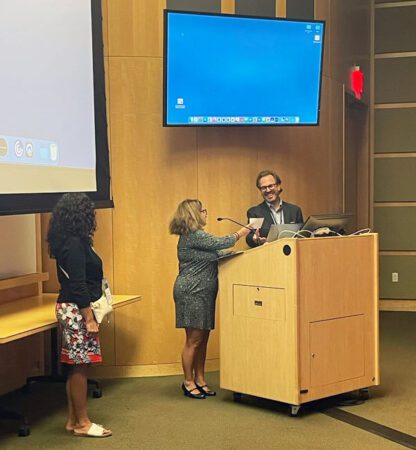 Deputy Executive Director Laura Occhiuzzi presented Dr. Sicklick with a check for $25,000 at a recent GDOL.

Research is the key to finding a cure and effective treatments for a rare disease. There are many ways in which we move research forward. One of our major strategic goals is to increase contributions to scientific advancements such as publishing findings in peer-reviewed journals, aiding in the process of guidelines development and clinical trials development.

We also directly fund research. In this interview with researcher & surgical oncologist Dr. Jason Sicklick (Moores Cancer Center, UC San Diego Health) he shares about his passion for SDH-deficient GIST research. At a recent GDOL, the LRG designated Moores Cancer Center as a Center of Excellence and presented Dr. Sicklick with a check towards his research.

Dr. Sicklick was a presenter at Life Fest 2022, and the LRG had the opportunity to ask him some questions about SDH-deficient GIST.

Q. What is known about SDH-deficient GIST?

A. It’s been historically thought that these were only tumors of the pediatric population or teenagers or young adults. But what we’re starting to recognize is that they’re occurring not only in that population, but even in older people. And so, it certainly spans the spectrum. What’s more difficult about these as well is that a lot of them are hereditary. And so, it’s not just the one individual patient that’s at risk, but because it’s hereditary, the genetic mutations have been passed down from one of the parents to the child. Not only is that individual with GIST at risk, but their family members may be as well. It speaks to the importance of really
having the entire family worked up if a diagnosis of SDH-deficient GIST is made.

The problem with SDH-deficient GIST, the progress to date, is that it started off with a lack of recognition that it was a distinct type of GIST. And then subsequently identified as a unique disease. And over the last 15 years or so, we’re starting to understand more about some of the nuances and some of the different genes, whether it be SDHA, SDHB, SDHC, or SDHD, that are mutated in these, as well as most recently in the SDHC epimutant tumors that are not hereditary. These generally only occur in young girls, and we don’t clearly understand why they’re developing this.

But what’s sort of hampered the field is a lack of ways to study this in the laboratory. And we can’t find drugs that work because unfortunately, all the common drugs that we use for KIT mutant GIST, or PDGFRa mutant GIST generally don’t work for these SDH-deficient GISTs. And so, the big task for us is trying to develop models to be able to study this. And we further have to think about the fact that, unlike some of the common GISTs that we see with KIT mutations that occur in a very specific area of the gene and that’s more commonly seen mutated set of mutations – the SDH mutations can occur anywhere within one of these SDHA, B, C, or D genes and they may have different effects on the biology of cells. There’s so much more heterogeneity within these tumors and that just adds another level of complexity.

Q. In your research, are you looking at how SDH is activated as well as what drugs are affect it?

A. So, when you’re looking at SDH, as research, if you could grow more cell lines, you have enough tissue, what are you looking to do, you’re looking for, how it’s activated, or only what drugs are affecting. We’re looking for both really. We’re now actively trying to recruit samples of tumor tissue from around the country, so that we can create a bank of cell lines that represent a broader span of the heterogeneity of these tumors. And so, we’ve been working with The Life Raft Group. Patient advocates are a critical factor in trying to identify where individual SDH patients are around the country and helping to recruit them in order to procure tissue for making cell lines. Several years ago, we didn’t have any cell lines, and with little bit of luck and a little bit of hard work, my laboratory was able to create the first sort of reproducible method for generating these SDH cell lines.

We’ve currently published our work on three of them. And we’ve got another five in the process in the lab right now that we’re currently developing. But ideally, would be to have a huge repertoire of numerous tumors that represents the broader spectrum of this disease, so that we can then start figuring out what’s different about an SDHA versus a B versus C versus a D versus an epimutant? What’s the same? Even within a tumor, are they behaving differently? Are they responding to drugs differently? It opens up the possibility for not only for screening drugs and understanding how the drugs work relative to the biology of the cells, but also for trying to think about if we can maybe approach these in a more personalized fashion where we’re figuring out the right drugs for that individual patient or for that group of SDH patients, rather than lumping them all together and assuming that every SDH-deficient tumor is exactly the same.

As part of our research focus for this week for in the Good News Holiday Campaign 2022, Dr. Jason Sicklick shares his passion for SDH-deficient GIST research in this video.