Risk of Recurrence Tools for Calculation

Although many factors have been suggested to contribute to malignant potential, the three most commonly quoted factors are:

Other important factors for a high risk of recurrence include:

All of the risk assessment methods on this page estimate the risk of a recurrence or recurrence-free survival (GIST nomogram) for GIST patients not taking imatinib. For patients, with GIST that has a high risk of recurrence, adjuvant imatinib has been shown to reduce recurrence and increase survival when taken for three years compared to patients that only take it for one year. See Gleevec for GIST. 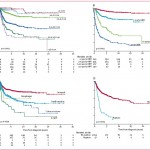 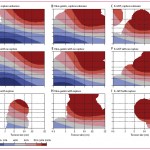 This method of estimating risk of recurrence is based on a pooled analysis of 10 population-based series of  over 2500 patients with operable GIST that did not receive adjuvant imatinib after surgery. Risk was stratified using the National Institute of Health (NIH) consensus criteria, the modified criteria, and the Armed Forces Institute of Pathology (AFIP) criteria.

Importantly, tumor rupture was added as a separate category. Most other systems only note tumor rupture as a higher risk; this system integrates tumor rupture into the risk assessment. This paper was published in The Lancet Oncology on December 7th, 2011 (early online edition).

Risk of recurrence of gastrointestinal stromal tumour after surgery: an analysis of pooled population-based cohorts

Adds tumor rupture and site to the NIH system

The modified NIH method adds several additional criteria to the original GIST Workshop (NIH) method (see table below). In addition to tumor size and mitotic rate which were factored in the original NIH criteria, it adds tumor location and tumor rupture. Most of the major methods do not include tumor rupture as a risk factor.

A commonly used system for estimation on individualized outcomes

In April, 2010, the Journal of the National Comprehensive Cancer Network issued the “NCCN Task Force Report: Update on the Management of Patients with Gastrointestinal Stromal Tumors” These guidelines contain both the AFIP-Miettinen method of determining risk (defined as metastasis or tumor-related death) and the GIST nomogram system. (See the table below).

These guidelines are based on data developed at the Armed Forces Institute of Pathology (AFIP) by Miettinen et al.

The complete guidelines are available on the NCCN website.

Abbreviations: GIST, gastrointestinal stromal tumor; hpf, high power field.
Adapted from Miettinen and Lasota, 2006. Data are based on long-term follow-up of 1055 gastric, 629 small intestinal,
144 duodenal, and 111 rectal GISTs. (Miettinen et al. 2001, 2005, and 2006).
*Defined as metastasis or tumor-related death.
†Denotes small numbers of cases.
ǂ Groups 3a and 3b or 6a and 6b are combined in duodenal and rectal GISTs because of small number of cases.
§ No tumors of such category were included in the study. Note that small intestinal and other intestinal GISTs show a markedly worse prognosis in many mitosis and size categories than gastric GISTs.
**Note: Only tumors <2 cm with mitotic rate <5 per 50 HPFs seem to remain consistently free of metastases in follow-up studies; all other categories involve metastatic risk (See table above). Small, ≤2 cm, mitotically active (>5 per 50 HPFs) GISTs in the rectum have >50% of metastatic rate. Such very small yet mitotically active GISTs most commonly occur in the rectum, where they can be found as palpable masses, whereas such tumors are extremely rare in the stomach and small intestine. 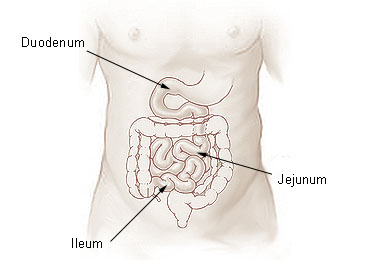 This nonogram, developed from 127 GIST patients treated at Memorial Sloan Kettering Cancer Center (MSKCC), can be used to predict the recurrence-free survival of GIST after surgery without receiving adjuvant therapy to help guide patient decision on selecting adjuvant imatinib therapy.

MSKCC has also developed an easy to use webpage where a patient enters the primary tumor location, tumor size, and checks a box if the mitotic rate is equal to or above 5 per 50 HPF. The prediction tool will then calculate the chances of remaining recurrence-free for 2 years and 5 years.

Risk of recurrence is the predicted chance (given as a percentage) of your tumor coming back if you do not take imatinib. Recurrence free survival has nothing to do with how long you are going to live, instead it’s the percentage chance that you will remain both alive and without progression (i.e. your tumor has not come back or grown) after a given period of time.  The nomogram estimates both the 2 year recurrence-free survival rate and the 5 year recurrence-free survival rate.

Especially useful when the primary tumor site is unknown

The following table is older (2002) and was developed from the Gastrointestinal Stromal Tumor (GIST) Workshop. It may still be particularly useful in cases of where the primary site is different than those listed in the table 1 or the primary site is unknown.

*Size represents the single largest dimension. Admittedly this may vary somewhat between prefixation and postfixation and between observers. There is a general but poorly defined sense that perhaps the size threshold for aggressive behavior should be 1 to 2 cm less in the small bowel than elsewhere.
+Ideally, mitotic count should be standardized according to surface area examined (based on size of high-powered fields), but there are no agreed-on definitions in this regard. Despite inevitable subjectivity in recognition of mitoses and variability in the area of high power fields, such mitotic counts still prove useful.
Note: The authors of this paper (Diagnosis of Gastrointestinal Stromal Tumors) also conclude that the risk categories as they define them in their paper “…should prove clinically useful, and in light of the uncertainties expressed herein and the well-recognized tendency of these troublesome tumors to pursue an indolent clinical course with a significant risk of late relapse, we also strongly advocate that all patients with GIST be carefully and regularly followed up for an indefinite period.”

An interactive activity designed for use on an iPad, this program estimates the risk of recurrence in gastrointestinal stromal tumor (GIST) – using various assessment tools which were developed in conjunction with government institutions and major cancer organizations. The application features four hypothetical GIST patients and allows you to select input for key tumor-related prognostic factors. This easy-to-use application underscores not only the importance of assessing the risk of recurrence, but also hoe the estimated risk is influenced by various prognostic factors, as well as the selected assessment approach.

Caution: It is intended as an educational exercise for use by oncologists and other healthcare professionals who are involved in evaluation of patients after resection of primary GIST. Results are not intended for use in treatment decisions.

Gleevec is an outstanding drug and a lifeline for the majority of GIST patients. However, it does have side-effects and these can be significant for some patients. In addition, like all cancer treatments, it is expensive. Thus it is extremely desirable to find better methods to determine which patients need to take Gleevec and which patients are essentially “cured” by surgery and don’t need to take Gleevec.

One of these methods, the CINSARC method, appears to have broader applicability to the wider sarcoma community as well. Importantly, the DNA CGHarray technique performed by Dr. Debiec-Rychter and colleagues can be performed from paraffin-embedded tumor tissue, the type of tissue that is already available/existing for most GIST patients.

Where can I find factors to calculate rate of recurrence (ROR)? (tumor size, mitotic index, location of tumor)