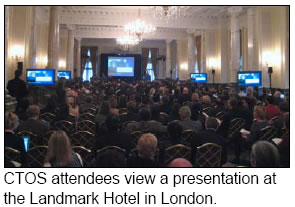 Treatment strategies & mutational testing were among key topics at CTOS 2008. There were also other  presentations and posters regarding GIST were presented at the Connective Tissue Oncology Society (CTOS) meeting on November 13 to 15 at the Landmark Hotel in London. The key topics were:

● Multiple treatment strategies for mutation- based resistance in GIST
● Planning for a new trial for wild-type GIST. SARC015: Phase II study of R1507 in wild-type GIST
● Dasatinib has a possible new role in resistant GIST
● Radiotherapy is a palliative option in GIST especially in the pelvis
● Pediatric GIST clinic registers largest cohort of young GIST patients
● The protein recycling mechanism – A potential new target in GIST
● Molecular testing growing – but has a long way to go
● Adjuvant Imatinib use growing

Dr. Jonathan Fletcher of Brigham and Women’s Hospital, Boston (and the lead researcher on the LRG Research Team) presented the current status of mutational resistance in GIST and the array of potential counter strategies.

A key point is that more than one mutation can develop in the same patient in the same or different metastases. In a word or two, GIST mutations are ‘heterogeneous’ or varied. While the source of these multiple mutations is not fully understood, it is theorized that they are always present and can emerge and become more viable following therapy that suppresses a single dominant primary mutation. The mutations follow some patterns, but can also be highly individual.

The strategies to combat resistance are as varied as the knowledge of how GIST signaling works. Dr. Fletcher outlined the following main strategies:

● Use a broader spectrum and more potent KIT/PDGFRA inhibitor to block multiple mutations. This may also include combination therapy (multiple KIT/PDGFRA inhibitors).
● Block the signal path downstream from mutant KIT/PDGFRA. This strategy theoretically works against all mutations and may also work against wildtype GIST where normal KIT/PDGFRA is over expressed. Targets can include, AKT, PI3K, mTOR, SRC, RAS, RAF1 and PKC theta.
● Degrade (or destroy) mutant KIT by blocking its chaperone (HSP-90) or by interfering with it’s transcription from DNA (HDAC and proteasome inhibitors).
● Block KIT/PDGFRA independent pathways. (IGF-1R, BRAF)

Dr. Margaret von Mehren of Fox Chase Cancer Center outlined a potential new target in GIST and the plans for a clinical trial of R1507 an IGF-1R inhibitor. The IGF-1R receptor has been identified as over expressed in a number of cancers which now include wild-type GIST. Unlike KIT, IGF-1R mutations have not yet been found. High levels of IGF-1R may be partly due to gene amplification. Research is needed to find the cause. It is clear that inhibition of IGF-1R can lead to cell death in both KIT wild-type and mutant GIST in the lab. Fox Chase is leading the effort to design a trial of R1507 in pediatric and adult wild-type GIST in early 2009. The trial will be called SARC015.

Dasatinib has a possible new role in resistant GIST

Dr. Scott M. Schuetze, at the University of Michigan presented the interim status of the SARC 009 Phase II trial in Dasatinib for advanced sarcoma. GIST has recently been added as a condition acceptable for accrual. As of report cutoff, 22 GIST patients have enrolled. The trial is available at 19 sites across the United States. Dasatinib has had renewed interest since it was shown in a paper earlier in 2008 that it is active against a common PDGFRA mutation (D842V) and also against KIT mutations in exon 17 in GIST cell lines in the lab.

Radiotherapy is a palliative option in GIST especially in the pelvis 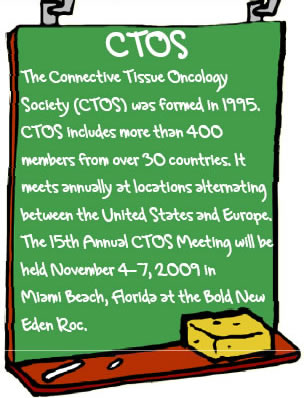 A poster authored by the Consortium for Pediatric and Wild-Type GIST Research (CPGR) outlined the activity of the pediatric GIST clinic at the National Institute of Health in Bethesda, MD. The first clinic was held June 19, 2008. Out of 21 patients registered, 14 were seen at the clinic and patient ages ranged from 11 to 35. The second pediatric clinic will take place on January 21 to 23, 2009. A goal of the clinic is to see all patients with pediatric or wild-type GIST. On clinic day one, patients will have the opportunity to meet health care specialists is a variety of fields, such as dermatology, genetics, nutrition, pain management and psychosocial services. On clinic day two, patients will meet with members of the CPGR. Throughout the day there will be a series of seminars that address subjects such as alternative/ complimentary approaches, nutrition tips, recreational/art therapy and relaxation techniques. In addition to developing a database of patients with this rare form of GIST, current CPGR projects include assessment of germline mutations of the succinate dehydrogenase gene previously identified in patients with Carney-Stratakis Syndrome, measurement of tumor size and growth rates and development of a protocol using an IGF-1R antibody for wild -type GIST.

CPGR has a webpage (www.pediatric gist.cancer.gov) for more info and an email address (ncipediatricgist@nih.cancer.gov) for patients who would be interested in registering for the clinic.

The protein recycling mechanism – a potential new target in GIST 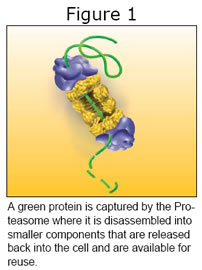 The proteasome (See Figure 1) is basically a recycling machine. It disassembles large proteins into their component protein building blocks so they can be reused within the cell. In this role it can move the cell directionally either toward renewal or natural death. It comes into play after another cell process called ubiquitination tags proteins with ubiquitin to identify them for disassembly by the proteasome.

The proteasome is active in a chain of events occurring during imatinib therapy. Therapeutic response to imatinib in GIST involves upregulation of histone H2AX. H2AX levels are regulated by the ubiquitin-proteasome machinery in GIST. By blocking the recycling machinery using an approved proteasome inhibitor called Velcade or Bortezomib, Dr. Duensing demonstrated that GIST cell death can occur as a result of higher H2AX levels. Bortezomib is also shown to reduce transcription levels of KIT.

Dr. Duensing concludes that this is a new therapeutic option for GIST.

Molecular testing growing – but has a long way to go.

The GIST ‘ReGISTry’ began in 2004 as a means of tracking actual delivery of GIST care at multiple sites in the United States. After patient consent, GIST clinicians enter historical data into a webbased database. Every six months the data is collected and summarized. Dr. Jonathan Trent presented the current summary in a poster at CTOS. There are now 753 patients enrolled from 116 treatment centers. Molecular testing (GIST genotype or mutation analysis) is growing but has only been done for four percent of the patients. This is a clear area of concern since genotyping is available and may have predictive value. Hopefully this percentage will grow as clinicians learn of the potential implications for treatment.

Several of the CTOS presentations can now be downloaded at www.ctos.org/meeting/2008/program.asp.