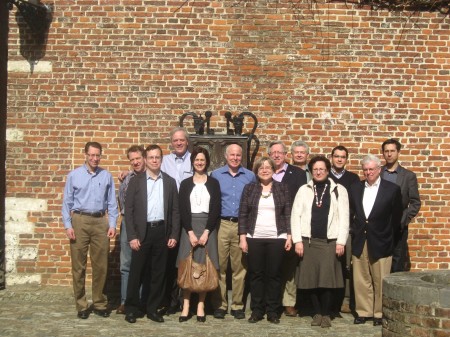 The Life Raft Group Research Team met in Leuven, Belgium last month to discuss progress to date, and formulate a plan on how to effectively move GIST research forward. Every member of the research team was in attendance, as well as guests Dr. Adrian Marino-Enriquez from Brigham & Women’s Hospital, Harvard University and Dr. Agnieszka Wozniak from the Catholic University in Leuven. LRG Executive Director, Norman Scherzer, Science Director, Jerry Call, Board Member, Jim Hughes and Executive Assistant, Lisa Pereira were also at the meeting. Research Team member Dr. Maria Debiec-Rychter of the Catholic University in Leuven was the extremely gracious host. A special thank you goes out to Genentech© for sponsoring the meeting.

Before getting down to work, the group convened early to take in the beautiful city, including a walking tour of major historical sites. In addition to the famous late-Gothic Style Leuven Town Hall, everyone was particularly captivated by the restored Grand Beguinage which dates back to the 13th century. It was in one of these restored buildings that team meetings took place.

The meeting wrapped up with renewed energy and a commitment from every researcher to continue this collaborative approach to finding a cure.

To wind down after two days of intense meetings, the group took a quick side trip to the fascinating city of Bruges, where they did their part to support local chocolatiers, taking home bags of goodies to share!

Below is a summary of some of the teams’ progress in the last year, prepared by LRG researchers and staff. More detailed updates will be coming in the following issue.

In 2006, the Life Raft Group initiated a strategic research plan – Pathway to a Cure –that emphasized cooperation, coordination and accountability and brought together ten of the finest GIST researchers in the world. Its focus was on identifying projects with the greatest chance of successful outcomes. In 2010, a Dutch GIST patient named Jeroen Pit, struggling to overcome treatment resistance, was investigating the best way to donate to GIST research. After consulting several leading GIST researchers, he decided that the LRG research team gave him the best chance for finding a cure. The funds he raised, when added to funds already raised by the LRG, have served as a catalyst for the rapid identification and validation of relevant treatment strategies. Though Jeroen passed away in early 2012, his legacy and tenacity continues on in the work the research team is doing for all the patients like him, present and future.

Project D-Day is focused on four areas: Sequencing of the GIST genome, Gene Knockdown studies, or screens that examine pathways essential for GIST cell survival, Drug Screening of GIST cells against large libraries of drug compounds, and Validation studies of important candidates from the first three areas that would allow a timely translation into clinical trials. Some highlights of recent accomplishments in these areas are as follows: