A new blood test technology may lead to major changes in treatment of Gastrointestinal Stromal Tumors.

In a study presented this week by Dr. George Demetri of the Dana-Farber Cancer Institute at the American Association for Cancer Research annual meeting, the blood test was shown to be more effective than traditional biopsies in identifying secondary mutations in GIST.

The research was done with GIST patients who were participating in the Phase III clinical trial of regorafenib, now marketed as Stivarga by Bayer. Using a technology known as BEAMing Digital PCR, developed by Inostics, the researchers analyzed blood samples drawn from patients after the disease had become resistant to both imatinib and sunitinib, the first-line and second-line treatments for GIST. 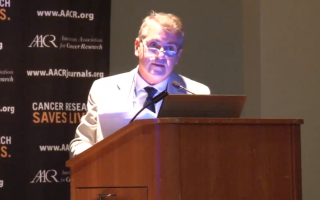 better at picking up “secondary” resistance mutations in the gene for KIT — abnormalities that emerged after the disease had become resistant to imatinib and sunitinib. The BEAMing technology proved far superior, finding such mutations in 48 percent of the blood samples, compared to only 12 percent found in tissue samples using traditional methods. Moreover, nearly half of the blood samples with secondary KIT mutations were found to have not just one such mutation, but several.

In the press release, Demetri said: “Older tools failed to show the breadth and depth of the cancer genomes in any single patient, and this can lead to failure in the process of choosing and evaluating new therapies for patients. A comprehensive approach to detecting and understanding the impact of different mutations in cancer within each individual patient has before now been impractical, but with this new blood test, we hope to make it easy to integrate it into research trials as well as, eventually, into routine clinical practice to make cancer care more precise and personalized to the needs of each patient.”

Jerry Call, Science Director of the Life Raft Group, said the new technology may be several years away from practical application but could have two very important implications for GIST patients.

“First, it promises to allow doctors to be able to personalize medicine in a way they haven’t been able to do before. They can give patients the right drug at the right time. As resistance develops to Gleevec, Sutent and Stivarga they will be able to identify secondary mutations and treat them with a drug that works with those mutations.” Combinations of drugs to treat several mutations may become more common and more effective, he said.

“Second, it may help provide better control for adjuvant treatment by knowing sooner when to respond with the right drugs.”

He said it seems likely that the test could be optimized to detect either primary or secondary mutations, which would make it useful for adjuvant monitoring in GIST and possibly in other cancers as well

One of the issues that will need to be worked out, he said, is determining at what point detectable levels of mutations in the blood are clinically significant.

The LRG has already begun looking into the possibility of developing a plasma bank, similar to its tissue bank that could aid in GIST research, he said. However, he said there will be a few logistical and regulatory hurdles that will have to be addressed.

“We want to do this as soon as possible,” he said, emphasizing the value of this new technology. “In many ways, it will be easier for patients to obtain blood samples than tissue samples. It will be extremely valuable to have blood samples at different time points in treatment; something that is not easy to do with tissue.

He added, “We are very grateful to Dr. Demetri and Bayer for showing the effectiveness of this new technology.”

Watch Dr. Demetri’s presentation about the blood test technology below: