Stivarga has just been approved in Japan for the treatment of GIST. Keep reading for more information.

Bayer HealthCare has received approval from the Japanese authorities (MHLW) for the marketing of Regorafenib (Stivarga) for the treatment of patients with GIST who have progressed after prior systemic cancer therapy.

“The approval of Regorafenib in Japan is an important development as it means that patients with GIST have a new option to slow the progression of this rare but aggressive disease,” said Kemal Malik, MD, Member of the Bayer HealthCare Executive Committee and Head of Global Development. “We are pleased that Regorafenib can make a difference to patients diagnosed with advanced GIST.”

The approval is based on the positive results from the pivotal “Phase III GRID Trial” that demonstrated a statistically significant improvement in progression-free survival (PFS) compared to placebo in patients with GIST whose disease had progressed after treatment with imatinib mesylate and sunitinib malate. Results from the GRID study were presented at the ASCO-Meeting in June 2012 and were published online on November 22, 2012 in the “The Lancet”.

Regorafenib (brandname = Stivarga®) is an oral multi-kinase inhibitor that inhibits various kinases within the mechanisms involved in tumor growth and progression – angiogenesis, oncogenesis and the tumor microenvironment. In preclinical studies, Regorafenib inhibits several angiogenic VEGF receptor tyrosine kinases that play a role in tumor neoangiogenesis (the growth of new blood vessels). It also inhibits various oncogenic and tumor microenvironment kinases including, KIT, RET, PDGFR, and FGFR, which individually and collectively impact upon tumor growth, formation of a stromal microenvironment and disease progression. Regorafenib is a compound developed by Bayer and jointly promoted by Bayer and Onyx in the USA.

Regorafenib was approved on February 25th, 2013 in the USA for GIST and it was not approved so far in other countries. Regorafenib is also approved in several countries, including the USA and Japan, for the treatment of patients with metastatic colorectal cancer (mCRC). The drug was recommended for approval by the European Committee for Medicinal Products for Human Use (CHMP) for the treatment of adults with mCRC on June 27, 2013. The decision of the European Commission on the marketing authorization is expected later in 2013. 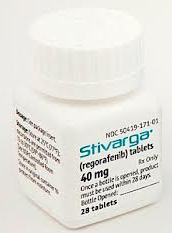 SPAEN Sarcoma Patients EuroNet Assoc. is the European Network of Sarcoma, GIST, and Desmoid Patient Advocacy Groups. Acting in partnership with medical experts, scientific researchers, the healthcare industry and other stakeholders, SPAEN works to improve treatment and care of GIST, Desmoid and sarcoma patients in Europe through improving information and support, and by increasing the visibility of sarcoma with policymakers and the public. Further information can be found on http://www.sarcoma-patients.eu