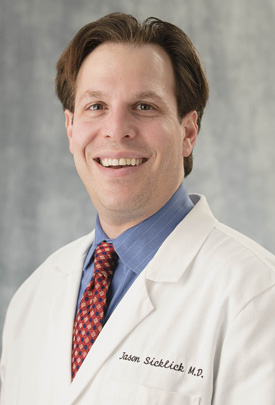 In a recently published study, Jason Sicklick, MD, surgical oncologist at University of California, San Diego Health System, and his team of researchers published their findings on the epidemiology of GIST.

His findings, which have been somewhat controversial, indicated that certain populations have a higher incidence of being at risk for GIST, including patients of Asian/Pacific Islander and African American descent.

Dr. Sicklick spoke recently with the Life Raft Group about the study, which will appear in greater detail in the December issue of the LRG GIST Cancer Journal.

Questions have been raised about the integrity of the data from the SEER database, which Dr. Sicklick and his researchers used for analysis. He explained that the database represents 28 percent of the United States population, and reflects those patients whose data has been reported by registrars in the medical institutions where they were treated.

Dr. Sicklick admitted that the database has its limitations. For example, the database doesn’t have the granularity in the data that would reflect things such as socioeconomic factors.

The value of using this database is that it provided access to a population of over 6,000 patients. With a rare disease like GIST, this is a significant population sample.

Sicklick pointed out that this is the first study using GIST-specific histology codes, and thus the first not to factor in other diagnoses.

When asked why he thought there was such a change in the numbers, Sicklick stated that “Much of it is due to coding issues. Early on, coders had to figure out how to code GIST, and some of it was figured out on the fly. Now the codes are clearer.”

Age is also an important factor to consider when looking at the numbers of patients with GIST. For example, the incidence rate for those diagnosed in the 70-79 years of age group was much higher, at 30.6 cases per million. “This is four and a half times that of the overall population in the study, “ Sicklick said.

The implications are that the disease often takes a long time to occur. “It can have a latency of many years before becoming symptomatic. As the population ages, the incidence will increase,” he added.

Sicklick was asked to comment on the fact that African Americans are 2.1 times more likely to be at risk for GIST, and what role access to care might play. He indicated that this would warrant further study, but that this particular finding was not new. Tran, Davila and El-Serag’s 2004 study indicated that GIST was more common in the older population, men and blacks. In that study, risk factors for mortality included older age, black race, advanced stage and no surgical intervention.

When looking at incidence and risk factor, African Americans have both a higher incidence and a higher risk factor for overall survival. This contradicts previous studies (Cheung, Zhuge, Yang and Koniaris, 2009), which showed the disappearance of racial disparities in GIST.

What was discovered about the Asian/Pacific Islander population is new. The study indicates that they are 1.5 times more likely than other patient groups to be diagnosed with this type of tumor. Although identifying this population as at-risk has not been found before, the survival rate for this group is higher. At this point, the data does not differentiate between subsets of Asian groups.

The idea for the study came about from over two years of Dr. Sicklick seeing a higher number of patients in the target groups in his clinic.

What might be a risk factor specific to these target groups? Currently, he has not been able to identify one. This warrants further study.

In terms of further research, Dr. Sicklick is already working on outlining a few pilots. He would like to explore the Asian link further, collaborating with researchers on an international level. He cited some research he has been exploring, and mentioned some of the exciting work Dr. Ron De Matteo of Memorial Sloan Kettering has done in genomic sequencing.

Dr. Sicklick is also working on studying the relationship of GIST to other cancers. Some of the work he has done in this area was recently presented at CTOS. For example, can we identify that GIST patients have a higher incidence for colon cancer? If so, would this then mean that GIST patients should be screened for colon cancer more frequently than the general population?

One thing that the LRG and Dr. Sicklick strongly agree upon is his statement, “People should be seen where people see a lot of it.” This supports the LRG’s Survival Guide premise of seeing a GIST specialist and being treated at a GIST center of excellence.

It will be exciting to see what this dynamic researcher does next. We hope that the LRG can aid him in the task of identifying risk factors for GIST, and even in finding ways to reduce the risks that are within our control.