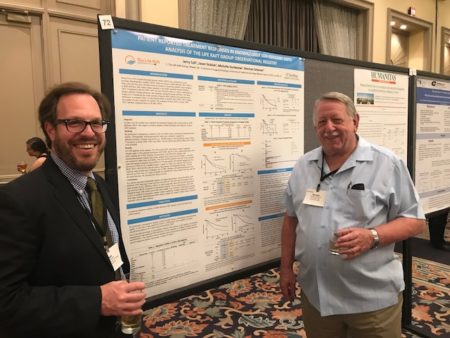 Norman Scherzer, Executive Director of The Life Raft Group, recently co-presented a poster at the 2017 CTOS (Connective Tissue Oncology Society) meeting in Hawaii with Dr. Jason Sicklick of the University of California, San Diego Moores Cancer Center. The subject of the poster was “What do we know about response of SDH-deficient GIST to drugs”? The question presents several challenges. First, most GIST patients do not get mutational testing, and even among those that do, testing usually stops if a mutation is not found in the KIT or PDGFRA gene. This means that the vast majority of SDH-deficient patients remain un-identified; even in a proactive patient group like the Life Raft Group.

As reported in the LRG poster, 117 patients reported some type of mutation other than KIT or PDGFRA. In the past, these would all be grouped as “wildtype”. Wildtype basically meant, “we tested KIT and PDGFRA” and they were normal, but we still think you have GIST. Our understanding of this group today had improved dramatically and testing can identify the molecular defect responsible for the vast majority of these GISTs.

Of the 117 patients in the registry with mutational testing, but without KIT or PDGFRA mutations, 98 remain “unclassified” wildtype and only 28 could be positively identified as SDH-deficient. SDH-deficient patients can be classified either with a mutational test that reveals a SHDx mutation, or a negative SDH-stain.

Even with triple the number of treatment cases to look at; the total number of cases was still small, especially considering the responses to drugs are poorer than the typical adult type GISTs. Given the significant limitations of the study, the results were not definitive. However, there were hints of activity in two areas; patients reported shrinkage more often with sunitinib (Sutent) than with other drugs, and, in very small numbers, patients seemed to stay on regorafenib longer than other drugs.

Our conclusions were that GIST patients need to have mutational testing and in cases negative for KIT and PDGFRA mutations, testing must continue to identify SDH-deficient GIST and other subtypes. In addition, better treatments are needed for SDH-deficient GIST.