Skip to content
Home/Patient of the Month for February: Richard Schoenbohm

Patient of the Month for February: Richard Schoenbohm

As a part of our Faces of Courage series, we are featuring a patient story each month. Each one of our members has a unique story to tell, but they all reflect the intrinsic courage of those who face the challenges of cancer head on, with dignity, strength, and passion for life.

Our Patient of the Month for February is Richard Schoenbohm. Here is his story: 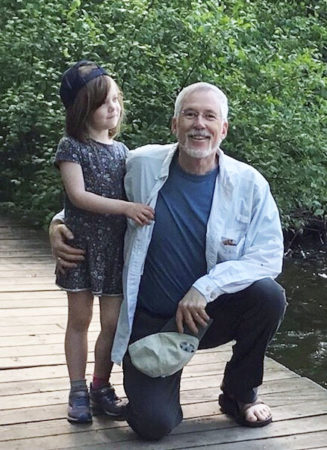 Richard Schoenbohm, Wisconsin, USA (pictured with one of his grandaughters)

March 8, 2010, Bucharest, and my prostate exam just went weird. I had been approved for a one-year extension of my Peace Corps service in Romania, contingent on a new medical exam, particularly since I was age 57. The clinic substituted an ultrasound for the gloved-finger. Suddenly the Romanian doctors began whispering and I glanced at the display screen overhead. Instead of my prostate, I saw a spherical mass, well-supplied with blood vessels, pulsing with my heartbeat. That was my unlucky, yet lucky, introduction to GIST.

No need to explain “unlucky” to those with GIST. But, approaching life as a cup half full, I appreciated, and continue to appreciate, all that was lucky. For example, I had been asymptomatic. If I hadn’t put in for third year in the Peace Corps and if the Romanians hadn’t used ultrasound, my tumor might not have been found until it erupted through my small intestine wall and metastasized. Following an evacuation back to Appleton, Wisconsin, I had a bowel resection on April 15th. Even though it was caught early and confined to a single tumor, my GIST was high-risk based on location, mitotic rate, and size.

Still, I had further reason to feel lucky. Other than the cancer, I was in excellent health. Medical oncology had recently discovered GIST’s specific mutations and their biological pathway to uncontrolled cell replication. Now, targeted tyrosine kinase inhibitors existed. My mutation was Exon 11, the one most susceptible to treatment. Learning of The Life Raft Group, I went to the 2010 Life Fest and instantly found a support group. I had good insurance; excellent oncologists; and super-supportive family and friends. And Gleevec worked for me with only minimal side effects.

But GIST loves the word “inevitable”, and I had setbacks. Following surgery, I took Gleevec for a short time as an adjuvant. But, within six months, two small tumors appeared in my lower abdomen, along with spots throughout my peritoneum. Renewing Gleevec shrank the tumors, and Gleevec continued working beyond statistical expectation. Yet four years later, secondary mutations allowed one tumor to start growing again, involving my small intestine and bladder. So, there was another bowel resection on November 15th, 2017, at the University of Chicago Hospital, along with removal of part of the bladder.

That reset the clock for 18 more months of Gleevec. However, a CT scan in June of 2019 confirmed that all the multiple tumors were now Gleevec-resistant and growing. I moved on to Sutent and then Stivarga. Neither stopped progression, and I had intolerable side effects of hemorrhaging and hand-foot-syndrome. Then, just when I needed it, Deciphera created an early access program for its experimental drug, ripretinib. Lucky again, I qualified last week for early access through the Cleveland Clinic. To me, the cup looks half full again.

Finally, going back to my unlucky, yet lucky, introduction to GIST, there was another silver lining. If that health check for the Peace Corps had missed the tumor, I might have taken the arc of my life even further from Appleton. If so, I would not have reconnected with my high school sweetheart, Sue; we would not have married last May; and I would not now be so happily, madly in love.

Despite GIST’s obnoxious persistence, I have enjoyed life the last ten years. Everyone needs a coping method, and this is what worked for me: I asked questions and read current, scientific literature about GIST. Life Raft has been an excellent source. I found good doctors who were interested in me and the disease. With that base of knowledge and advice, I controlled what I could by eating right, exercising, and taking all available medical steps. Then, as much as I could, I set aside what I could not control. Worrying is an energy and time drain.

When not at doctor appointments, treatment, or recovery, I stay active in the world. In 2012, I had a rewarding, but unsuccessful campaign for Wisconsin State Assembly. I continued to practice adoption law until August of 2018. For hobbies, I run – I have done the Otto Grunski 5K every year, except last. I also bike and kayak. When indoors, I read and do small woodworking projects, especially for my wife, Sue. I am the current board president of the River Alliance of Wisconsin, and the 1st Vice President of the Greenville Lions. And, since March 2010, I have attended both my daughters’ weddings, and have welcomed two granddaughters into the world

I strive every day to grow in grace towards others.