Posted on July13, 2020 in honor of GIST Awareness Day by Global Genes: 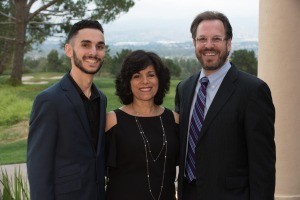 It’s no secret that rare families are the driving force behind many rare disease diagnoses and drug development efforts. A self-described “mother on a mission,” Debra Melikian has entered into a unique partnership with RARE Champion of Hope Honoree, Dr. Jason Sicklick. Together, they’re working to find a cure for succinate dehydrogenase-deficient gastrointestinal stromal tumors (SDH-deficient GIST), a hereditary rare cancer syndrome that has claimed the lives of both Debra’s husband and her son Merak.

For GIST Awareness Day on July 13, Debra and Dr. Sicklick sat down to discuss how they will continue enacting change, raising awareness, and working towards better treatments for SDH-deficient GIST.

In the four years since Debra Melikian began raising funds for GIST research being done at University of California San Diego’s Moores Cancer Center, they have developed new human cell lines, identified several new drug treatments for investigation, and launched a clinical trial. You may be wondering how she has managed to drive SDH-deficient GIST research forward so quickly in such a short amount of time. The short answer is: through a close professional relationship with Dr. Sicklick, translational scientist and cancer surgeon at UC San Diego and 2018 RARE Champion of Hope Honoree.  Read more…

Ms. Melikian will be moderating a webinar by Dr. Sicklick entitled Understanding the Link Between Pheo, Para, and GIST produced by the the Pheo Para Alliance on August 26, 2020. Click the link to see more details.