Skip to content
Home/Pat George: the man, the myth, the legend

Pat George: the man, the myth, the legend

Pat George, LRG member and volunteer is well-known in the LRG email community. He can often be found cheering someone up, spurring someone on, or imparting some of his Alabama wisdom on us all. It is hard to think of Pat outside of the GIST community, but when we received a copy of this article from the North Jefferson News, we thought it would show a image of Pat outside of GIST. 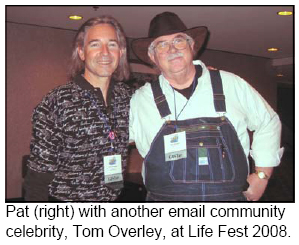 A Huffman man has taken it upon himself to further the educations of students in rural north Jefferson County — even though he knows none of them. On Wednesday, Pat George will give a vocabulary test at Corner Middle School. He made the test, will administer it and provide the cash rewards for top scorers.

George does not have a background in education, but rather is a retired employee of the City of Birmingham.

George and his wife Anne do all of the work from scratch, along with a team of people to “make sure I don’t make mistakes,” he said.

He creates the test from a Merriam- Webster dictionary, which he said is what the students use in class.

“It takes hundreds of man hours to do one of these,” he said. George said it takes about 200 hours to create each test. He makes three exams, one each for the letters A, E and I to have different tests for sixth, seventh and eighth-graders.

Each test will have 120 questions with four multiple-choice answers.

“You get 120 answers out of the dictionary, but then you have to come up with 360 deceptive lies out of an active imagination,” said George.

He then lays out the test and makes test booklets and answer sheets.

This is the second year George will give the test and cash prizes at Corner Middle School.

It’s his fourth year to give the test at Townley Junior High School in Walker County, where he got started with the project.

George got his start at both schools because of an old friend — his former first sergeant, Bill Hatcher, in his old Alabama National Guard unit.

Hatcher is an assistant teacher and bus driver at Corner, according to George.

There are usually up to 15 children taking the test.

Cash prizes go to the top 10 scorers, totaling $303 for each school.

In addition, George and his wife provide hot cheeseburgers and French fries to the students after they’ve completed the test. He said he’s also known to generously distribute chocolate among teachers.

It’s not cheap to create and give the tests. George said it costs up to $600 out of his pocket to administer the test at each school.

“It gets downright expensive,” he said. “But maybe I’ll inspire a few. If you don’t do something with what you’ve got while you can, you’ll regret it when you can’t .

Reprinted with permission from the North Jefferson News.