In this article we look at IGF-1R, a novel GIST therapeutic target. The vast majority of GISTs arising in adult patients have activating mutations of the KIT or PDGFRA genes (80- 90%). GISTs lacking activating KIT or PDGFRA mutations are commonly referred to as wild-type GIST. Despite intensive research, the molecular abnormalities giving rise to wild-type GISTs remain unknown. Compared to the common exon 11-mutant GISTs, wild-type GISTs have lower rates of objective response to imatinib. In addition, the progression free and overall survival of patients with wild-type GIST is reduced compared to that of patients with KIT exon 11-mutant GIST. In pediatric GIST, the kinase mutational frequency is reversed, with more than 90 percent of pediatric GIST having a wild-type genotype. Notably, the effectiveness of imatinib against wildtype pediatric GIST is often reduced compared with its activity against adult wild-type GIST.

Given the limitations of imatinib for treating wild-type GIST, numerous investigators have sought to identify other biologic abnormalities that could be used to devise novel therapeutic strategies. Recently, Tarn et al. identified the Insulinlike growth factor 1 receptor (IGF-1R) as a potential therapeutic target in GIST. IGF-1R is a tyrosine kinase receptor that binds either IGF1 or IGF2. After ligand binding, the tyrosine kinase domain is activated and stimulates the intracellular signaling pathways that control the proliferation rate and apoptosis. Similar to KIT and PDGFRA, two key IGF-1R signal transduction networks have been identified: the GPTase Ras-Raf-ERK/MAPK and PI3K-AKT/mTOR. The IGF/IGF-1R system plays a key role in the biology of normal cells and tissues. Aberrations of this molecular pathway such as over-expression of IGF-1R, or elevated plasma levels of IGF1, or genetic polymorphisms of the gene encoding IGF1 have been found in association with a variety of cancers including sarcoma. Because overexpression of IGF-1R has been identified in several tumor types and because of its role in cellular metabolism, which potentially has relevance to the survival of malignant cells, IGF-1R has become a target for anticancer therapy. Notably, both monoclonal antibodies and small molecule tyrosine kinase inhibitors that block IGF-IR activation are undergoing clinical development. 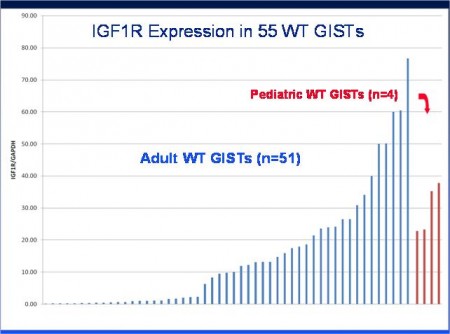 To further assess the biology of IG1- 1R expression in GIST, we developed quantitative real time PCR assays for IG1-1R, KIT and PDGFRA. We prepared RNA from a series of 117 previously genotyped GIST and quantified expression of the IGF-1R, KIT and PDGFRA mRNA using a control gene (GAPDH) to normalize for differences related to variations in the quality of specimen RNA. Using this approach we found that GISTs with mutation of KIT or PDGFRA had very low levels of IGF- 1R expression. In the case of 51 wildtype GISTs that we tested, approximately 40 percent of these cases had low levels of IGF-1R expression that were similar to kinase mutant GIST. In contrast, the other 60 percent of adult wildtype GIST had IGF-1R levels that were ten to 100 times higher (Figure 1) than KIT-mutant GIST. Our series also included four cases of pediatric wild-type GIST, these cases all had high level expression of IGF-1R in a range that overlapped with adult wild-type GISTs with high level IGF-1R expression. Using our data, Drs. Rob West and Matt van de Rijn (Stanford University School of Medicine) were able to perform a tree analysis of KIT, PDGFRA, and IGF-1R expression versus tumor genotype (Figure 2, page 8). Notably, PDGFRA expression was strongly clustered with cases of PDGFRAmutant GIST, highlevel IGF-1R expression was restricted to a subset of wild-type GISTs (including all four cases of pediatric GIST). KIT expression was variable amongst our cases and was not strongly associated with any particular tumor genotype. 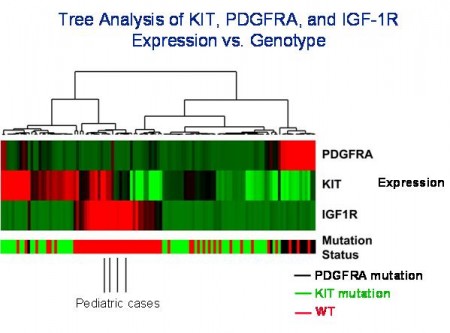 classification of wild-type GIST (along with other markers). These results also have implications for trials of IGF-1R inhibitors, as it would be predicted that clinical response might correlate with the level of IGF-1R expression. This would suggest that the most favorable responses would be seen in the 60 percent of cases of wild-type GIST with high-level IGF-1R expression. However, it remains to be seen if this prediction is borne out by the results of clinical studies and whether there will be a threshold level of IGF1-1R expression that is required for a therapeutic response. In addition, methods for detection of IGF-1R expression by GIST need to be optimized (immunoblotting vs. immunohistochemistry vs. RNA-based detection methods). As a cautionary note, we need to remember that cellular expression does not always correlate with biological importance of a pathway. Therefore, the mere fact that IGF-1R is highly expressed by certain cases of GIST does not necessarily mean that clinically inhibiting this protein will cause GIST cells to stop growing or die.

It is believed that GIST arises from, or shares a common developmental pathway with, the interstitial cells of Cajal (ICC). Notably, immature ICC express IGF-1R protein, whereas mature IGF-1R do not. In contrast, very immature ICC express KIT at much lower levels than committed ICC progenitors or mature ICC. Therefore, IGF1-1R expression by GIST may be an indicator of the differentiation state of these tumors and may be a surrogate marker for the underlying biology of these tumors. The use of this marker in studying ICC development, especially in existing mouse models of GIST, may provide important insights into GIST biology and yield clues to new therapeutic strategies for this disease).

Progression-free survival- the length of time during and after medication or treatment during which the disease being treated (usually cancer) does not get worse.

Overall survival– Overall survival refers to time a patient survives (usually given in months or years). Signaling pathway-molecular interactions that enable communication in or between cells.

Polymorphisms– A common variation of a gene.

Monoclonal- a group of cells produced from a single ancestral cell by repeated cellular replication.

Immunoblotting- a technique for, or the blot resulting from, analyzing or identifying proteins via antigen-antibody specific reactions, as in Western blot technique.

mRNA– a molecule of RNA encoding a chemical “blueprint” for a protein product.

Genotype– In GIST, genotype usually refers to the type and general location of mutation within a tumor, e.g., KIT exon 11.

Heterogeneity– means that something (an object or system) consists of a diverse range of different items.

Immunohistochemistry– A method for staining cells. Interstitial cells of Cajal- specialized cells, found throughout the gastrointestinal tract that are essential for normal gastrointestinal motility; these are the cells from which GISTs arise.