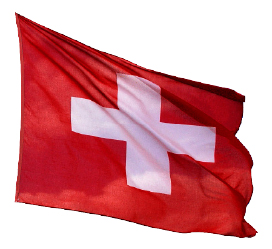 This year’s Swiss GIST meeting on April 19 in Zurich was a special event. The board had started to plan early, as it wanted to offer a special program to commemorate the tenth anniversary.

The fact that Dr. Piotr Rutkowski of the Cancer Center and Institute of Oncology in Poland and Dr. Heikki Joensuu of Helsinki University Hospital in Finland had accepted the invitation of our board member, Dr. Michael Montemurro, was a great pleasure. Both guests had already lectured the evening before in the context of “Sarcoma Afternoons.”

About 100 GIST patients, relatives, experts and interested professionals, as well as representatives of Swiss Group for Clinical Cancer Research (SAKK) and the pharmaceutical industry gathered at the Restaurant Au Premier at Zurich Main Station. In his welcome speech, Markus Wartenberg from Das Lebenshaus of Germany emphasized once more the value of the pharmaceutical industry’s support. He extended a special welcome to the foreign guests, among others Amy Bruno-Lindner from Austria, who will launch the first GIST group in that country.

Markus Wartenberg presented a “Tour d’Horizon” on the topic of 10 years of GIST and the Swiss group. It never fails to impress how much was built up, researched, networked, exchanged and accomplished during that period. There is good reason to believe that the intensive work will be continued not only in medical research but also with regard to patient organizations.

The second speech was by Dr. Alexander Kiss of the University Hosptal of Basel on the topic of “Psycho-oncology—what elements can be useful for the GIST patient?” He underscored how individual the handling and dealing with a GIST diagnosis can be.

It was fortunate that Dr. Philippe Fontaine of Satigny/Geneva agreed to contribute a second chapter on the topic “GIST—my friend.” Two years ago, in a very personal account, he talked about his “friendship with GIST.” Dr. Fontaine has been a GIST patient for 10 years and is a practicing physician. This time he reported on the merits of meditation, which he started after he fell ill.

Subsequently, Dr. Montemurro of RHM London/University Hospital of Zurich spoke on the topic “Treatment Standards and Perspectives in Switzerland.” He mentioned that there were about 100 new cases per year in Switzerland and estimates the number of GIST patients in Switzerland at roughly 1,000. He gave an overview of the different medications currently used in the treatment of GIST and held out the prospect of the third-line medication Regorafenib being approved this year.

The title of Dr. Rutkowski’s lecture was “Role of the Surgeon 2013.” He talked about different therapeutic surgical interventions in GIST, explained decision-making processes and presented actual patient cases.

Dr. Joensuu talked about “How it Began, How it Continues.” He is the specialist who for the first time successfully used Gleevec on an American GIST patient. The realization that Gleevec—a medication used to treat chronic myeloid leukemia—is also effective in GIST was rather incidental, a fortunate discovery indeed. In his lecture he described the circumstances of his discovery in more detail than we know from “Living with GIST,” the movie that was released nearly two years ago.

Recognition and a special thanks was given to the sponsors, Bayer AG, Novartis Pharmaceuticals, Pfizer AG and the Krebsliga Schweiz (Cancer League Switzerland.) Without their support, a meeting of such magnitude would not be possible. As usual, it was a unique opportunity for all attendees to learn the latest about GIST and relevant therapies and to meet experts in this discipline.

In a meeting preceding the Anniversary Meeting, Mrs. Helga Meier Schnorf was awarded the “Certificate of Honorary Membership of the GIST Group” in recognition of her untiring efforts on behalf of the GIST cause.