In honor of our H.E.R.O. campaign, we are profiling our GIST Superheroes 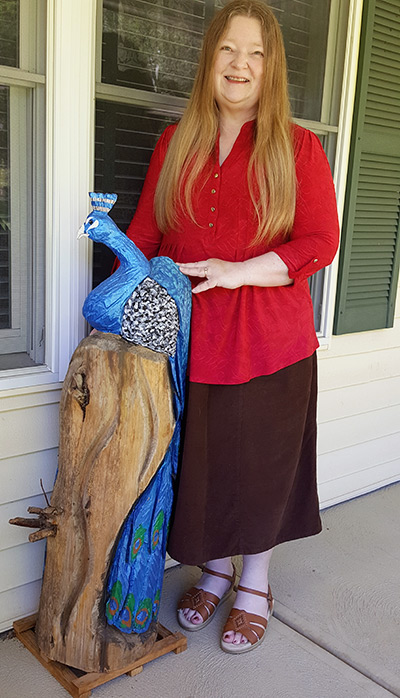 Let me introduce you to Cindy Farr.

Cindy’s super power is her faith. Having become a Christian in her teenage years, Cindy has always sought God’s guidance and received comfort in her faith. She is a wife and mom, a community volunteer, and a powerhouse wood carver. Now in the sixth decade of her life, Cindy lives a life of generosity, joy, and challenge.

She is a mom to two grown children. She homeschooled them from preschool through 12th grade back in the 1980’s, in the pioneer days of homeschooling when it was mostly unheard of. Homeschooling takes great investment, dedication, and commitment; there is no schedule to guide you, no field trips to give you a break, and no PTA to support you. Cindy is now a grandmother who enjoys special time with her three granddaughters, teaching them to craft and cook and enjoy their time spent playing together.

Cindy has spent much of her life as a community servant and volunteer. She has offered 20 years as a volunteer at a local Crisis Pregnancy Center. She volunteered at her local hospital for close to a decade, both at the reception desk and making crafts as a fundraiser for those unable to pay for their own hospital care. She has also invested 11 years working as a hospice volunteer, providing grace and solace to families in their most trying hours.

Her healthcare journey began in 2006 with a diagnosis of thyroid cancer. Although there had been some thyroid issues in her family, the diagnosis of cancer was unexpected and unwelcome. A short two years later, she was diagnosed with diabetes. After a respite, cancer once again returned in the form of an abdominal GIST tumor, an ovarian cancer tumor, then closely followed by an area of breast cancer. Cindy had a partial mastectomy to remove the area of lobular carcinoma in situ (LCIS) and another surgery to remove both a cantaloupe-sized GIST tumor in her abdomen and a grapefruit-sized ovarian tumor in her pelvis.

Cindy began taking Gleevec; she felt good and felt that her treatment was successful. In the autumn of 2015, she learned that she had a fast-growing mutating GIST tumor that merited attention. Her omentum was surgically removed in July 2016, along with all three known GIST tumors.

Later in 2016, a routine mammogram revealed that she now had breast cancer in her other breast: Ductal carcinoma in situ (DCIS). Cindy is a powerhouse, but enough insult to her body was enough!  She decided to have a right breast mastectomy and begin the first steps of immediate breast reconstruction. Her breast would be fully reconstructed nearly six months later, and the remaining breast would also be operated on to ultimately match the other. Since these surgeries, Cindy has struggled through ten months of pain, and adverse effects from being given incorrect medicine that led to gall bladder surgery and further hospitalizations.

To quote Cindy, “Only the Lord kept me together through all these difficult things. When I felt I was empty, and had no hope, I could always pray to Him, knowing He heard and that His heart was hurting for me. He gave me the strength to go on.”

In her personal time, Cindy is a woodcarver. This is a hobby that she shares with her husband, Gene. Three years ago, she went to a woodcarving conference with some friends and serendipitously, found herself in the company of a woodcarver who also excels in chainsaw carving…a skill Cindy has always wanted to acquire. The gentleman offered to teach Cindy to carve anything she wanted with a chainsaw. She chose a peacock, her symbol of hope.

She was first visited by a peacock when her mother was nearing the end of her life, and Cindy needed a sign from the Lord that He was going to help her through everything that was going on. A full-grown male peacock appeared on their property and stayed for two whole weeks, perching nightly in a large pine tree at the edge of their property, close to the house, trumpeting to let her know he was there. Since this glorious bird appeared in her life when she was in such distress and gave wings to her hope, Cindy has found that peacocks in many forms appear when she needs hope, confirmation, and peace. She rejoices in this symbol of her hope for the future.

Cindy has a bucket list. When she fell ill, she looked hard at what she wanted to embrace and experience in her life. Her husband of 41 years was her strongest supporter and encouraged her to go for it!  Cindy is now “officially” a zip-liner, cardmaker/scrapbooker, Habitat for Humanity home-builder, cruise-taker, target-shooter, a Cleveland Museum of Art-aficionado, and a hero. She wants to be found living her life to the fullest as she slides into Home Plate! Godspeed, Miss Cindy!