Reasons why GISTer’s are on no treatment

One of the frequently asked questions from the GIST Community is “Why are there some GIST patients who do not take any medication to treat GIST?” The assumption is made that there a number of individuals who have a low risk of recurrence and don’t need to take Gleevec, while this is true, there are a multitude of other reasons why patients are not taking Gleevec or any drug to treat GIST.

We took a closer look at the data to help understand what those reasons may be.  Living LRG registry members were analyzed that listed their most recent status as no treatment. This data was extracted from the LRG’s Registry on October 7, 2013. The Modified National Institute of Health (NIH) Method was used to calculate risk. There were some records that did not provide complete diagnostic information to calculate this figure and/or did not provide us enough information to state a concrete reason why treatment was either halted or the patient was not taking a drug. It is important to also mention that patients receiving no drug treatment include patients who have been disease-free and patients that have had a recurrence of disease. It should be noted that, in general, patients in the LRG registry form a higher risk group than the entire GIST population (based on comparisons to population-based studies).

We will present two different views of this data. For the first, we looked at all 377 living patients that are not on treatment. This was particularly helpful for looking at risk and mutational status as decision points for treatment or no treatment. In the second analysis, we wanted to look at other reasons, including what patients were telling us the reasons were. For this analysis, we looked at a sub-set of 235 cases with the most complete data.

When looking at the data, regardless of any patient-supplied comments, an interesting pattern emerges. It becomes clear that two things have a heavy influence in whether or not a patient is on no treatment. The first is their disease stage including their risk of a recurrence. In keeping with current guidelines, such as NCCN and ESMO, lower risk patients (including intermediate risk) are on no treatment far more often than high risk or metastatic patients (table 1).

The second thing that becomes apparent is that mutational status also affects the decision to be on medication/treatment (table 2). Patients with PDGFRA mutations and wildtype GIST are much less likely to be on active treatment than other patients. The PDGFRA data is probably heavily influenced by PDGFRA D842V patients, which make up two thirds of PDGFRA patients and are non-responsive to most current treatments. Of 53 living patients classified as “pediatric or likely pediatric” (forming much of the wildtype GIST group), 32 (60%) reported no treatment at last report. In comparison, 345 of 1037 (33%) living patients classified as non-pediatric reported no treatment at last report.

When we focused in on the 235 records with the most complete data (including anecdotal comments) we found ten of the most common reasons that a patient is not taking drug or other treatment to treat GIST. There are some records that had compounding reasons listed for not taking medication. 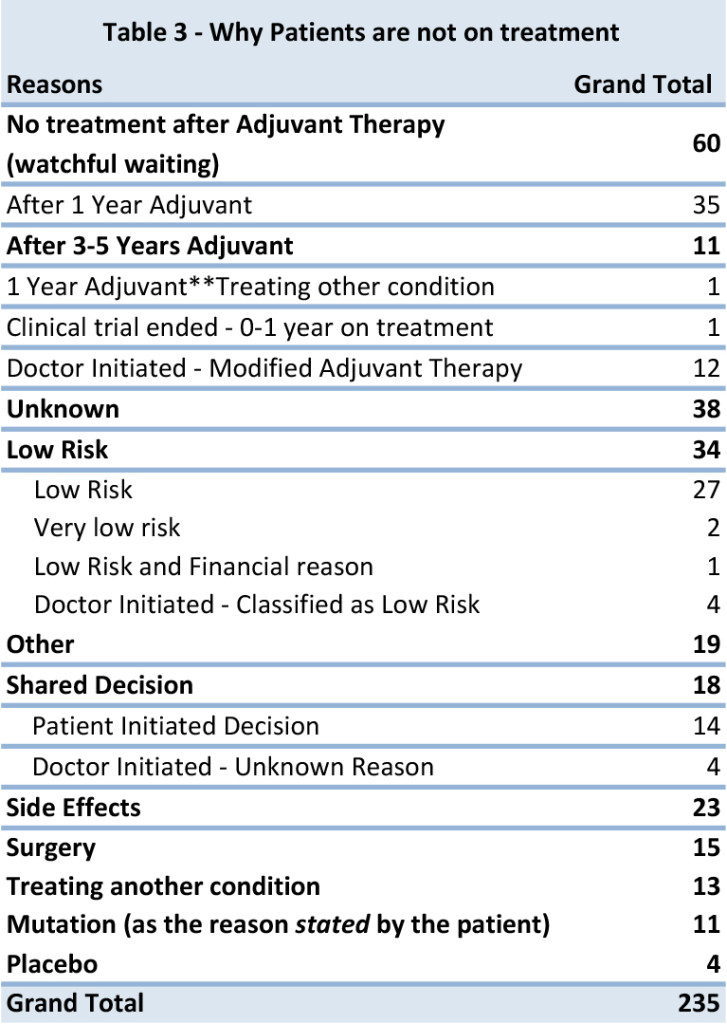 1.     No treatment after Adjuvant Therapy – All patients in this group had stopped treatment, after either completing 1 year of adjuvant therapy or 3-5 years of recommended therapy with Gleevec.   There are 3 patients from this group were classified as low risk, based given diagnostic data.  A significant number of reports came in where the doctor had modified the suggested treatment guidelines and   We have 1 patient also was being treated for another unrelated condition, but listed as the primary  that they stopped treatment for completing 1 year of adjuvant therapy.

2.     Unknown – From even the most recent reported records, we do not have a reason why treatment was either not prescribed or halted.  None of the patients in this group were classified as low risk, but were in higher risk categories, unknown diagnostic information or no anecdotal reports.  By having more diagnostic information (tumor size, tumor location, mitotic rate and tumor rupture) or current and up to date treatment information, will help us to illustrate a complete the picture for the GIST Community.

3.     Low Risk of Recurrence – All patients in this group confirmed that they did not take Gleevec for adjuvant therapy.  Using the modified NIH criteria, they were classified in the low risk category, which may have led to no treatment being prescribed.   We have only a few confirmed cases where the patient was told by their doctor they have a low risk of recurrence.

4.     Other –A few patients reported taking no medication because of socioeconomic reasons like they did not have access to the drug where they lived or could not afford the medication.  There were also a few instances for stopping treatment for family planning. There are also a few patients who diagnosed in the last 6-12 months who have not reported to be on treatment.   All cases were either had Intermediate or high risk of recurrence.

5.     Shared Decision –  Based on anecdotal notes, we assessed that there are some cases where treatment decisions were made between a discussion between the doctor and patient,  to either opt out of the recommended therapy or modify the recommended adjuvant treatment plan.  The majority of these instances of shared decision were initiated by the patient to stop treatment or opt out of treatment. The majority of those records were classified as high risk of recurrence.  It’s likely that there were many other cases of shared decision making that were not captured in the comments.

6.     Side Effects – Patients who reported to us that they stopped their treatment due side effects, were not limited to just Gleevec, Sutent or other therapies.   One patient had cited that side effects from surgery prevented them taking the drug.  It was also noted that only 4 patients who cited side effects as their primary reason for stopping treatment, were also considered low risk.

7.     Surgery –   Patients are currently not taking or have not resumed therapy because they have either stopped treatment prior or post-surgery for tumor removal.  The majority of cases that stopped treatment after surgery to help heal from the procedure.

8.     Treating Another Condition – Over the course of the last 5 years there has been a few reports of secondary cancers diagnosed before or after the diagnosis of GIST.   Treatment for GIST has been halted to treat another cancer such as Kidney, Bowel, and Pancreas.  Other non-cancerous conditions like infections at the incision sight, Auto Immune Hepatitis, Diverticulitis, Appendicitis, MRSA, Kidney Failure and a Brain Aneurism were listed as reasons why patients are not taking anything to treat GIST.

9.     Mutation – Surprisingly we did not see as many patients report the reason for no treatment or Gleevec not being prescribed as being due to the discovery of a mutation that is not responsive to Gleevec.  This is in contrast to the raw data that suggests mutational status plays a strong role in prescribing treatment or no treatment.

10.  Placebo – We only have a few cases in our registry where it was known that a placebo in a clinical trial was administered.  After discovering the placebo was given, no other treatment was prescribed. 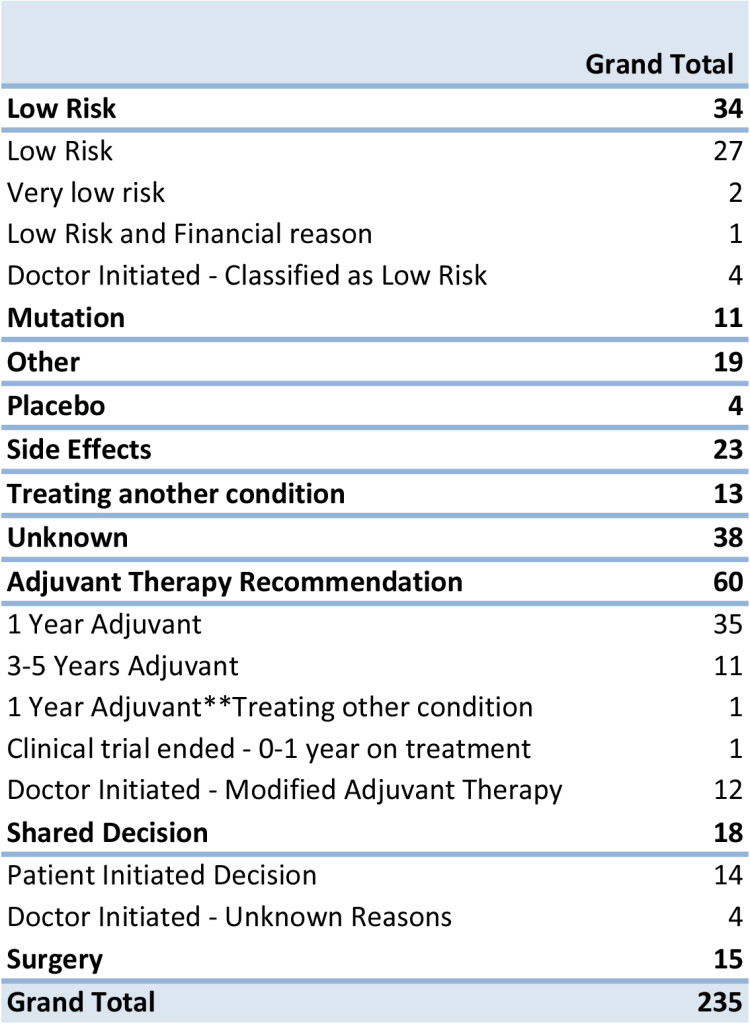 In summary, there are many reasons that GIST patients may not be on treatment. These include: low risk of a recurrence, not on treatment after adjuvant Gleevec, no treatment influenced by a non-responsive or less responsive mutation type, family planning/pregnancy, end of life/hospice, intolerance to medications and stopped GIST treatment to treat another condition (such as a secondary cancer).

For deceased patients, 50 (10%) reported no treatment at last report and 26 reported hospice. When combined, this represents 15 percent of patients reporting no treatment at the end of life.

Please feel free to email me with your questions regarding this analysis and if you have suggestions for other statistical observations that can be made from the LRG Patient Registry.