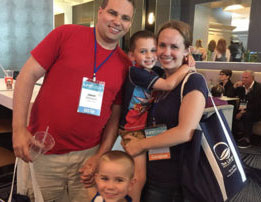 Jason DeLorenzo has been a GISTer since 2003. After moving to Virginia, Jason returned home to New Jersey to visit his family. His visit with his family went much differently than planned as he become ill and wound up in the emergency room. Doctors originally believed his pain was from an ulcer, but soon they realized it was pediatric GIST. Jason took Gleevec for a year and tried to live as normally as possible. In 2007, he had a recurrence and would continue to be monitored by doctors. While being a young adult with a GIST diagnosis was scary for Jason, he continued to persevere and met his wife Jill in 2010. With the support of his wife, Jason became more active and engaged in the GIST community. In 2012, he underwent surgery to remove the tumor found in 2007. Jason became a patient at the NIH Pediatric Wildtype GIST Clinic and would continue to be placed under surveillance post-surgery. Three years later, in 2015, Jason learned of a third recurrence and he will continue to monitor the progression.

Raising awareness for the GIST community is important to the DeLorenzo family. Recently they held their 14th annual barbecue where friends and family gathered to fundraise for #GISTresearch in support of The Life Raft Group. They use this event as an opportunity to raise awareness about GIST and put a face to the disease. Jason and Jill believe it is important to support the GIST community and educate their children.

The DeLorenzos take each day as it comes with a spiritual, God-centered living philosophy. They believe in supporting each other and playing on the same team. Their message for others on their GIST journey is to not let your sufferings get you down, but rather use it as an opportunity to grow.